Welcome back, Ashes players, to another installment of Re-Constructed. Sorry if I’m late, I was walking through the woods and got a whole mess of things tangled on my shoes. You know, weeds, thorny bits...limbs. Anyways, we’re unraveling Jessa Na Ni today.

By this point, you should already know the deck building restrictions we’re working with. If you do need a refresher, you should check out our many previous articles in the Re-Constructed series, and maybe come back with an offering. Nothing too fancy as Jessa’s not picky. 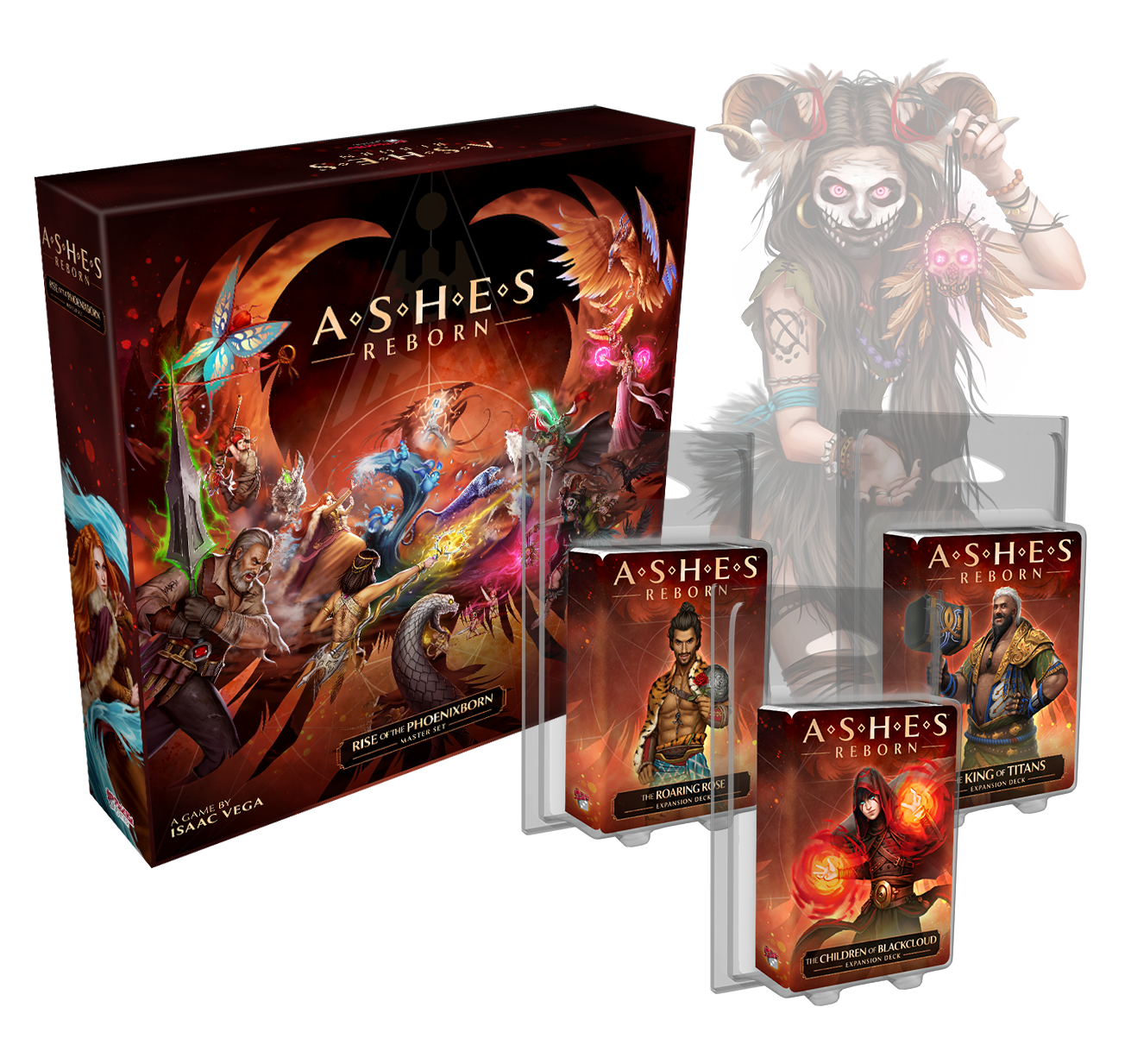 6 Ceremonial, 4 Charm // Needed Sets: The Children of Blackcloud, The Roaring Rose, The King of Titans

Jessa’s pre-con excels at wearing people down over an extended match using her ability in conjunction with a wide array of support units. Blood Puppet pressures our opponent’s dice pool while constraining battlefields, Blood Archer lets us dominate the battlefield with pinpoint accuracy, Living Dolls give us an amazing outlet for self-damage effects, and Blood Shaman gives us a powerful sacrifice tool for the new Fear. Final Cry is a fantastic way to achieve victory upwards of 1 entire round early, while cards like Undying Heart and Redirect give our engines much greater levels of protection. Most of the pre-con already works really well at advancing a death by a thousand cuts. A valid approach going into this re-con would be providing more defensive tools, but we’re a little lacking with this dice arrangement, so instead we’re simply going to sharpen the knife. 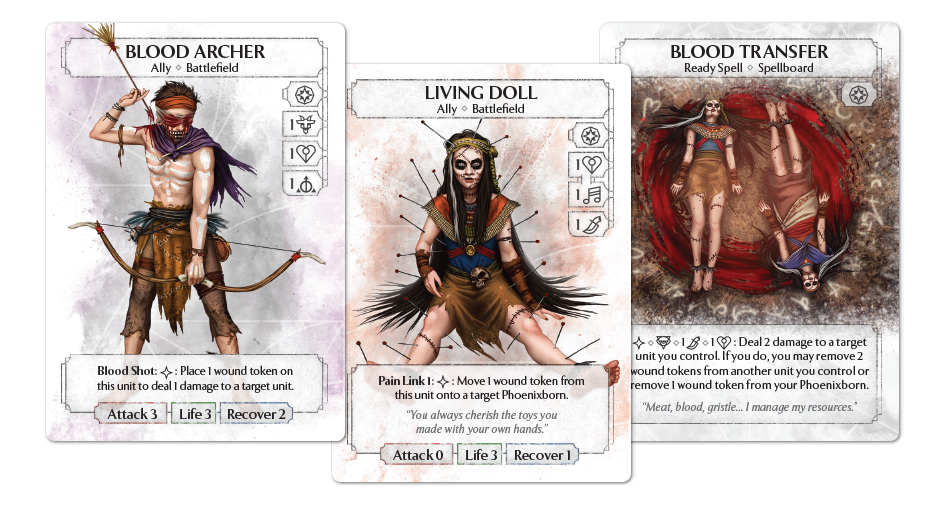 We’ve retained all of Jessa’s tools for a battle of attrition, and added Chant of Revenge for a substantial kick of extra damage. The ideal board state we want to achieve is the same one as the pre-con: Blood Archer + Living Doll + Blood Transfer (and puppets on the opponent’s side), with a plan to use Blood Archer to ping the board down, Blood Transfer the damage over to Living Doll, then Living Doll to directly wound the opponent. It’s a lot of side actions, but you can use your summon books to help fill in any main action gaps. On the surface, this will probably look quite similar to Brennen’s re-con, but the splash into charm magic and lack of Spirit Burn makes this a substantially different flavor of burn. 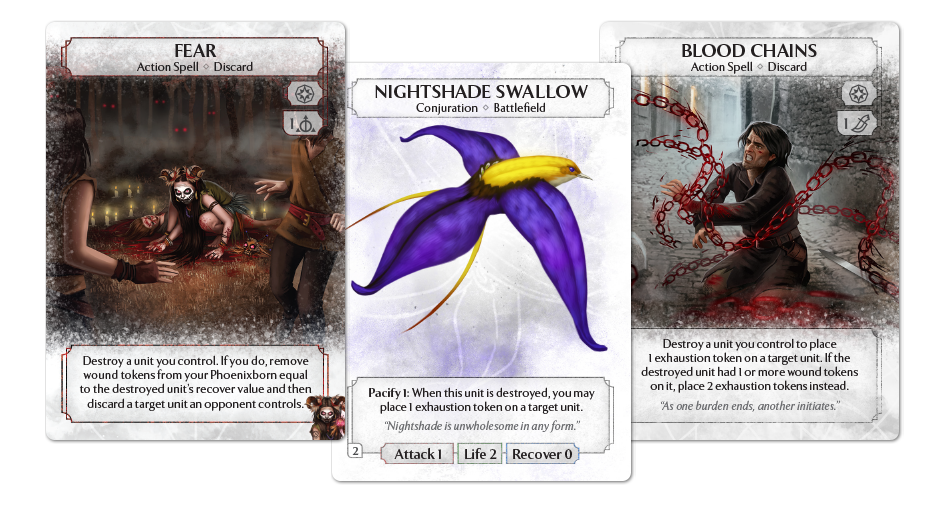 In order to survive our opponent, we’ll be looking to sabotage their board by combining Fear with a powerful sacrifice in Nightshade Swallow, as well as adding Blood Chains to further push our control agenda. Swallow actually works well as a surprisingly versatile unit. Reactively, swallow is an awkward blocker that often causes foes to hesitate on their attacks. Proactively, swallow can be combined with our numerous sacrifice effects to kill it manually for extra benefit. Unlike the Brennen game plan that often involves killing our allies, we’re looking to take advantage of a strong repeatable conjuration to bear our sacrifices.

You may have noticed this deck features a few oddities, namely 5 spellboard cards (Jessa can only have 4) and Mass Heal, a card intended for divine decks. For the first, Ashes’ unique First Five system allows you to place flexible single picks in your deck to adjust your gameplay. In this deck, I want either Blood Transfer or Cut the Strings, but I almost never want both since they basically do the same thing. In most cases, I prefer Blood Transfer as it provides healing for longer games, but there are some matchups where Cut the Strings will be much more important, like those involving troublesome alterations or where I absolutely need additional Main Actions to work with. 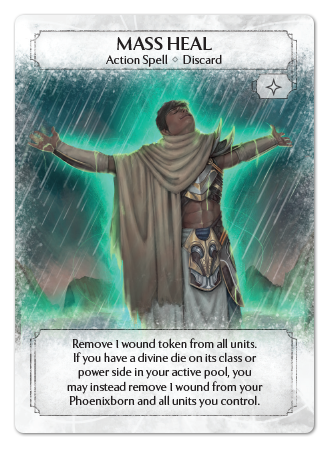 Mass Heal on the other hand, is a bit of a weird tech card. Because we have no divine dice, Mass Heal will also be healing our opponent’s units...including their Blood Puppets. Since your opponent usually needs to spend 1 die to damage a blood puppet and Mass Heal is free, it can apply additional dice pressure against opponents committed to cleaning out the puppets (while occasionally healing up our Blood Archers as well). Ashes is a game that rewards some wild experimentation, so don’t be afraid to flex your creativity when you can.

This is a difficult deck to first five. You always start with Nightshade Swallow, and you probably want Blood Puppet about 90% of the time (maybe not against Brennen). You definitely want either Blood Transfer or Cut the Strings in your opener, even if you don’t use them in the first round. I almost always start with Living Doll since we have access to a spellboard enabler, while Blood Archer is a bit more matchup reliant. And finally, I almost always start with Fear, usually to combine it with swallow. You should expect your opponent to try playing around Fear in most cases, but that shouldn’t necessarily stop you from running it; the card’s still really good (also, just because you’re packing fear doesn’t mean you must use it in round 1). While I’m not opposed to running Chant of Revenge in your opener, I do have a difficult time figuring out what to replace it with, especially since it doesn’t help you stabilize the board at all. This re-con, more than most, will require a lot of trial and error to find what you enjoy, and especially what works. 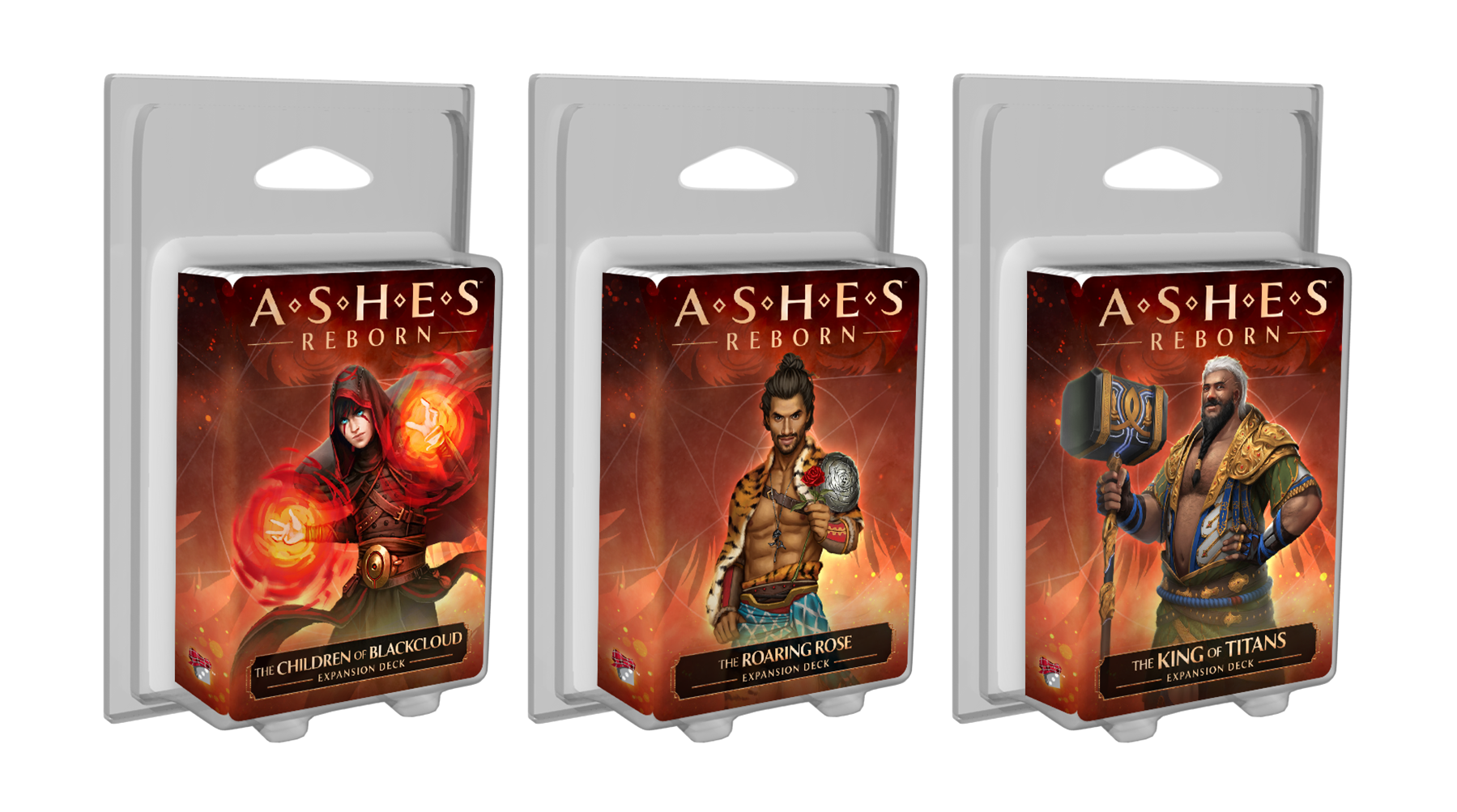 Fine, you got me. King of Titans is only here because I really love the Mass Heal/Blood Puppet synergy, but it’s far from essential in this deck. The other two expansions are harder to remove. Blood Chains provides us with so much coverage, and Fester gives us an interesting way to punish units that attack the swallows before we can sacrifice them (since swallows return 1 damage). While we’re getting fewer cards from The Roaring Rose, Nightshade Swallow is one of the best conjurations for this deck with the dice types we’re running, and Change Psyche also gives us some extra reactability. I’d say that swallows don’t have a decent replacement in this deck, but you can add some Redirects and Transfers to cover for the lack of Blackcloud cards, at which point maybe go back to a 5/5 dice split. 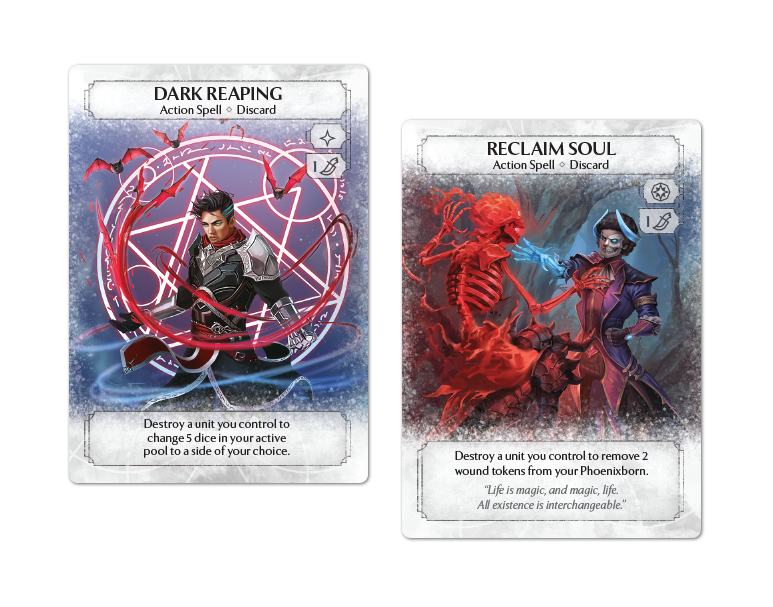 A lot of this deck is built to take advantage of sacrificing our own units (especially Nightshade Swallow). I use Blood Chains to maintain control of the board, and Fear to keep my opponent’s board down (and my health up), but there are some other options that may cater better to your needs. Dark Reaping makes it easier to accommodate all the ceremonial power symbols you’ll be spending, and Reclaim Soul gives more survival. 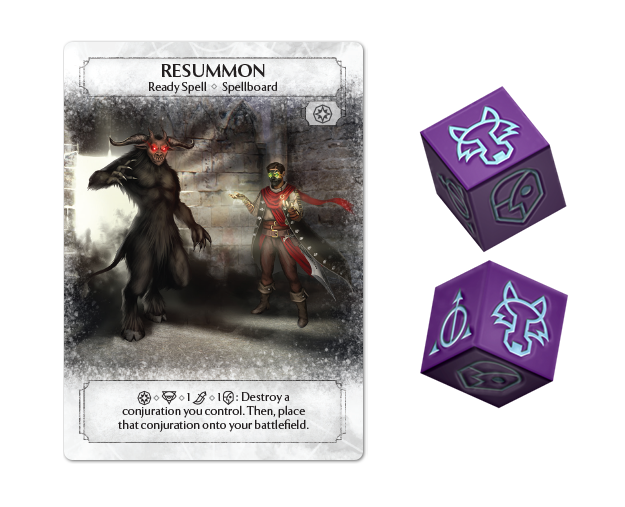 If you want to split into illusion magic, Resummon offers an amazing synergy piece with Nightshade Swallow (while being admittedly a little expensive). 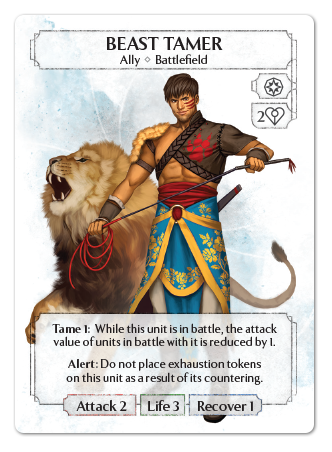 Additionally, while I haven’t added any new allies to this deck, there are some amazing swaps available in your dice types. Coming from the Brennen re-con, Rising Horde is a great death target that refills the board and Fire Archer gives us more cheap allies while advancing our burn objective. There’s also the rather powerful Beast Tamer which can do a magnificent job staving off big units that like to cause trouble. Finally, if you’re finding that you’re having a hard time protecting the more intricate parts of your engine, you could swap out 1 or 2 copies of Final Cry / Redirect for Golden Veil. There’s many valid directions in which this deck can be taken, so you’ll need to discover what works for you specifically. That’s part of the fun of deckbuilding - we can all have different ways of accomplishing the same goal.

That’s all for this article. Next time, it’s back to expansion land as we try our hand at performance art with Victoria Glassfire.

Pre-Order the Master Set!
Ashes Reborn: Rise of the Phoenixborn
$49.95
2
14+
30-60 minutes
Choose from six Phoenixborn in this Ashes Reborn base set, using imaginative cards and custom dice to summon faithful allies, combine powerful spells, and outwit your opponents in a fast-paced back and forth barrage of well-crafted magic and strategic skill.

Pre-Order The King of Titans!
Ashes Reborn: The King of Titans
$14.95
2
14+
30-60 minutes
Balance the power of Nature and Divine magic to unleash the titans of the desert on unsuspecting prey with Xander Heartsblood.