Beyond the Shadows of a Doubt

Welcome back, Ashes players, to another installment of Re-Constructed. Please take your seats, as you’ve arrived right on time for the big performance.

By this point, you should already know the deck building restrictions we’re working with. If you do need a refresher, you should check out our many previous articles in the Re-Constructed series. If you’re already familiar with them, you know that Victoria’s cards have played backline support for nearly all our illusion-driven decks thus far. This time, however, it’s time for Victoria to take center stage. 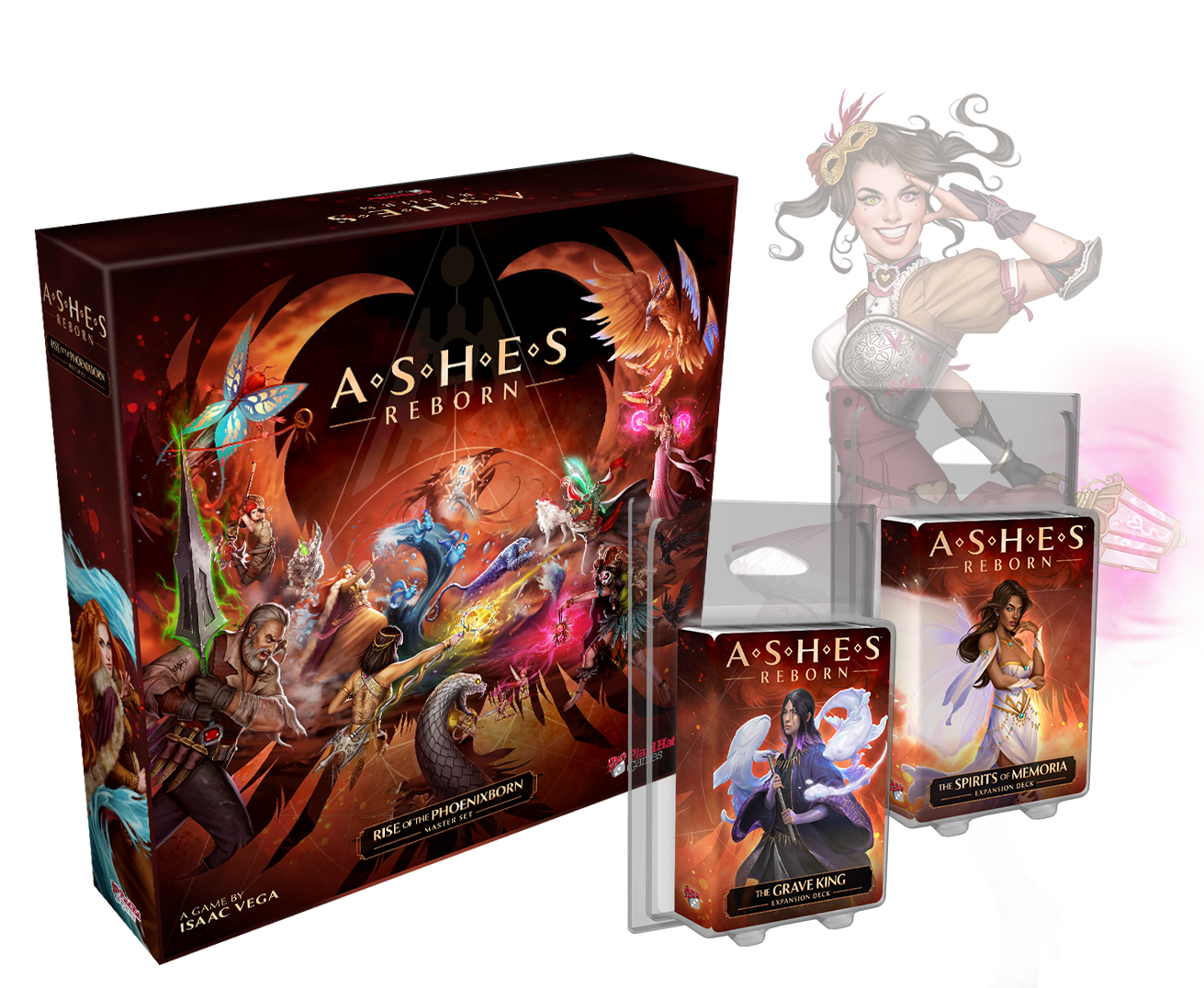 The Duchess of Exuberance (Re-Victoria)

10 Illusion // Needed Sets: The Ghost Guardian, The Spirits of Memoria

2x Figures in the Fog

Mono-illusion is a tough gambit. Similarly to charm magic, illusion alone is a little lacking and often works better as a foil for other magics. It’s going to take more than brute force to win a match with just illusion, so we need to put on a heck of a show. Luckily, Victoria’s pre-con already gives us a lot of tools to make that happen. Some of illusion’s strongest units are already featured in this deck: Shadow Spirits are dirt cheap for their value if you can hit your Power symbols, while Shadow Hounds provide serious bombast in the form of conceal and a crazy strong focus effect. We also have strong point removal through To Shadows, emergency board control with Figures in the Fog, and a frustrating burn counter with Vanish. Finally, Secret Door gives us a finale to close out a tight game. It’s all fairly impressive on its own, but the re-con is here to really light up the stage with some explosive spellboard acceleration. 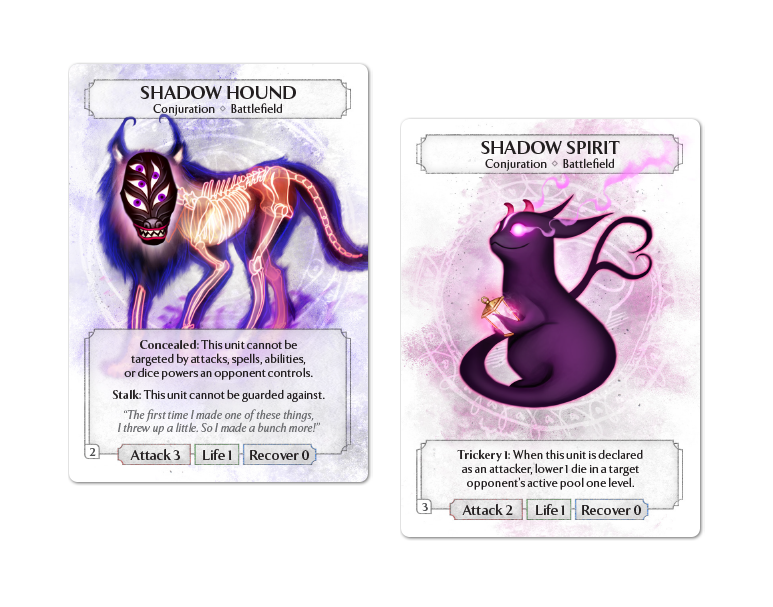 Shadow Hound has a monstrous focus ability, Shadow Spirit is great as a repeatable summon, and the newly added Shifting Mist enhances our options tremendously, so we’ll be pairing these essential reads with Abundance to find all of our books as soon as possible, all while keeping up the pressure. Once we get a massive spellboard, we’ll cast Gates Thrown Open to create a spectacular blowout turn and threaten to overwhelm our opponent; GTO is especially good with cheap activations like Abundance, Shifting Mist and Shadow Spirit. We’re moving fast and fabulous, looking to completely drench the board in shadow control and endless pressure while also sneakily advancing an alternate win condition via Abundance, which given enough time will eventually cause our opponent’s deck to disappear. 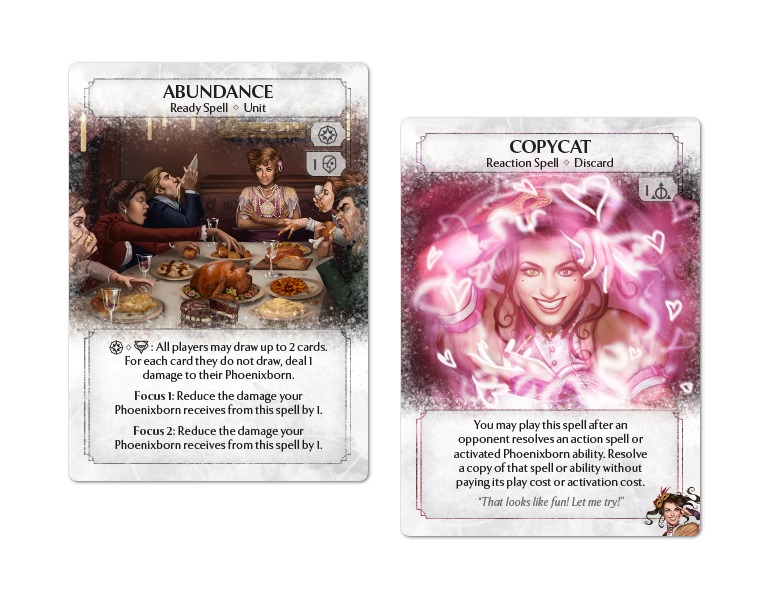 Victoria specifically is a challenging Phoenixborn to wield, as her effects are powerful but unreliable. While her ability offers the highest value of dice manipulation in the game, it’s also random, and while her special card offers a ton of potential value, its use is also dictated by the composition of your opponent’s deck and abilities. Deceptively, we’re playing a few cards to help curb all this randomness in our favor. While using Victoria’s ability leaves us and our opponent with an unpredictable outcome, we can easily stabilize by employing Hidden Power or Shifting Mists, and we can further stifle our opponents with Shadow Spirits and Hollows. Also, Abundance is not only more likely to draw us into our Copycats, but will also give our opponent more potential Action Spells that we can use to trigger it. Everyone wins, and by everyone I of course mean you, mostly.

Despite how difficult this deck is to pilot, the First Five is pretty straight forward. We definitely want Abundance, hounds, and spirits every time, and I personally like pushing my luck with Shifting Mist and Gates Thrown Open. My gameplan involves dropping my entire spellboard and activating everything (use Abundance before Shadow Hound in case you draw a second copy). Then, use GTO to refresh all your spellboard cards, and activate everything again except for Shadow Hound. You’ll still have 2 dice left with 4 extra cards in hand in a deck where everything costs 1 die on average. Now, that’s a tremendously risky opener, so you can replace Shifting Mists and GTO with more stable options like Hollow and To Shadows, or even Copycat against a few particular Phoenixborn. That being said, I don’t think you can play mono-illusion without taking a few risks, and if this one pays off you can overwhelm your opponent pretty early, forcing them to play the rest of the game on the backfoot. That sense of being ahead is vital as, ultimately, it’s much easier to defeat an opponent with illusion magic when they feel like they’re behind, even if they aren’t. That, after all, is the real illusion. 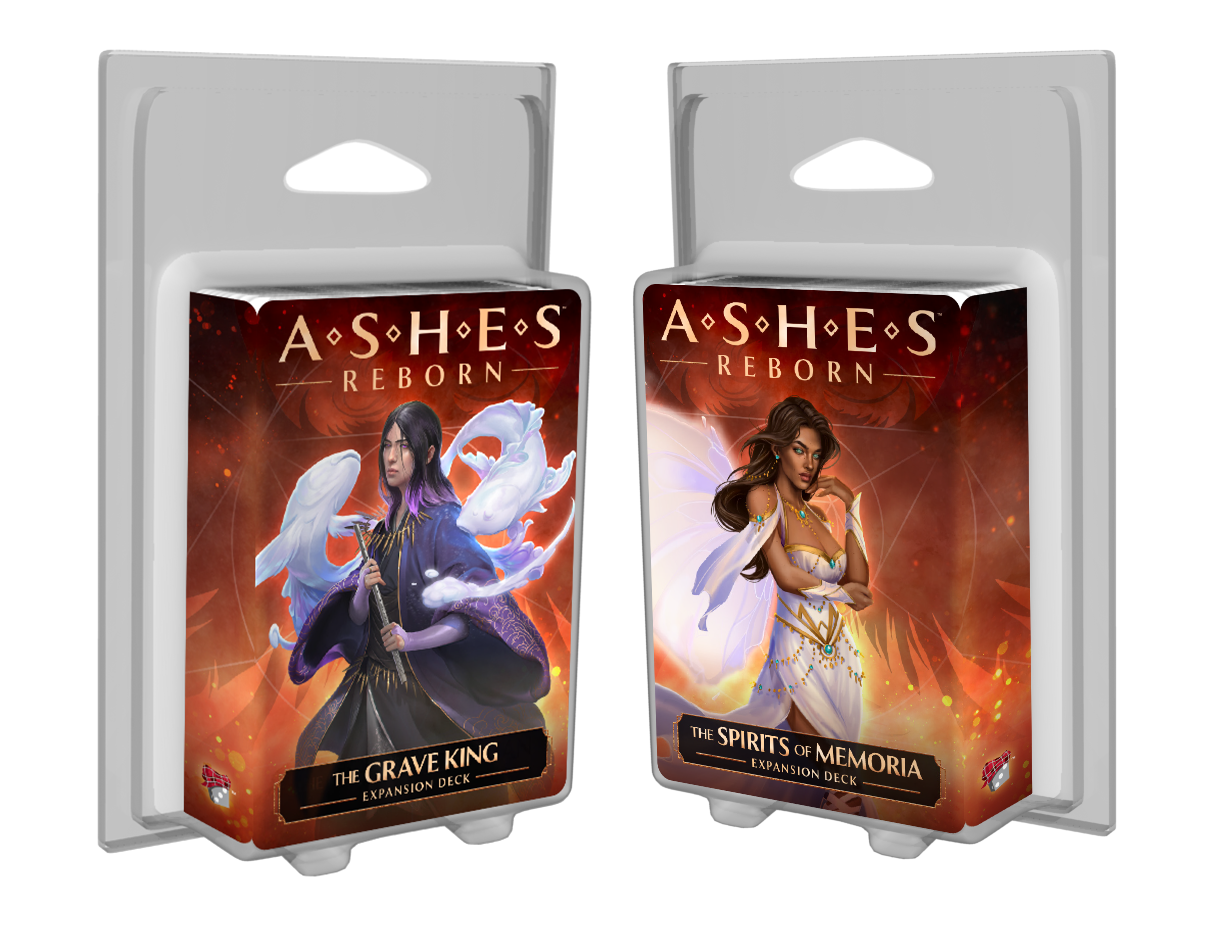 I’m pretty confident in saying that a lot of this deck hinges on Gates Thrown Open, and Shadow Guard gives us another excellent reaction for crazy surprise turns, but Hollows aren’t completely necessary. However, Hollows are the only illusion ally in the game that cost 1 die, so any replacement will automatically increase the deck’s costs or decrease its reliability. In my opinion, the least noticeable replacements for Hollows are either Anchornauts or Shadow Strikes. Strange Copy and Fade Away are also valid replacements. If you find that losing the Hollows cuts down on your board presence too much, you can also replace it with Summon Mist Spirit as another cheap way to propagate blockers; we’ll use Mist Spirits to stay alive and later replace it with Secret Door to close the game out.

We’re mostly using card draw here to fill up our spellboard, but another avenue for Abundance is one of constant reactivity. With this much draw, you can afford to run more weird flex singles like Safeguard, Fade Away, Particle Shield, Reflections in the Water, and Strange Copy. Our costs are also absurdly low, so you can potentially opt to run slightly more expensive options like Rose Fire Dancer, Iron Worker, Steady Gaze or even Flash Archer if you want to be truly daring. But, as mentioned before, illusion is at its best when paired with another magic type. 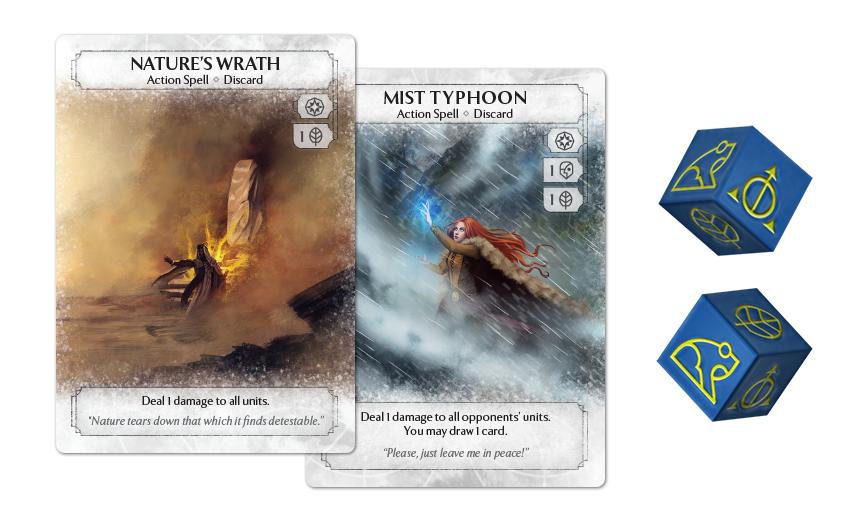 In the splash zone, lots of options become pretty viable. Natural magic is great for mixing things like Mist Typhoon and Nature’s Wrath, both excellent board clearing tools, as well as Ice Trap for hyper efficient removal. 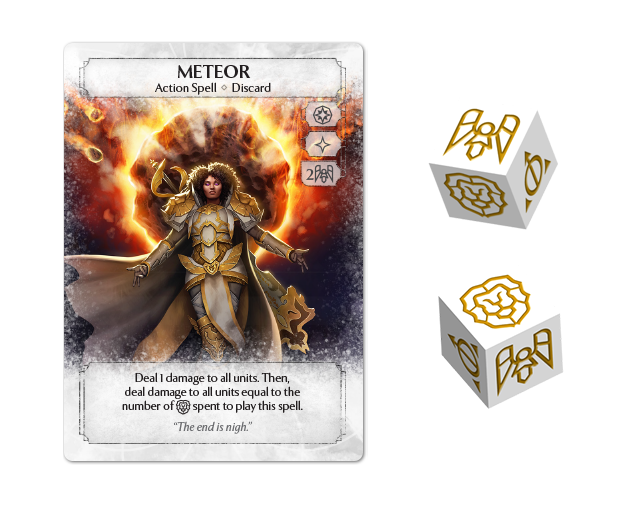 Divine magic gives us access to Meteor, which is a tough card to use well but has tons of room for potential upset (and given our low costs, we tend to reset better than many opponents). Divine also gives us Chained Creations, an absolutely brutal tempo card against certain conjurations, as well as the divine dice power which can add extra damage through Secret Door.

That’s a wrap for this article, you’ve been a terrific audience. Coming up next, we move from deck vanishing to hand tricks with Saria Guideman.

Pre-Order the Master Set!
Ashes Reborn: Rise of the Phoenixborn
$49.95
2
14+
30-60 minutes
Choose from six Phoenixborn in this Ashes Reborn base set, using imaginative cards and custom dice to summon faithful allies, combine powerful spells, and outwit your opponents in a fast-paced back and forth barrage of well-crafted magic and strategic skill.