Catch you on the Rewind

Hello again, old friends. It’s been quite some time – a year and change if the math checks out. Back then, we crafted a series of articles and decklists under the moniker “Re-Constructed” that sought to provide a midpoint between the original precons – the decks right out of the box – and full on constructed play. Because time magic as a dice type was still very much developing, we decided not to meddle with them, and finished things out with the last of the Divine/Sympathy cycle of Phoenixborn. But the math checks out, and a year and change has certainly changed the landscape of Ashes. So I figured it would be worth revisiting these articles for all of our new Phoenixborn, starting with Jericho, the old familiar.

It’s been a while, so let me catch you up to speed on the Re-Constructed format:

Also, unlike the previous articles, we’re going to make the bold assumption that you’re a cool person and used your Covenant subscription to get all the time magic content when constructing these decks. Though even if you haven’t, we’ll have some budget-friendlier options towards the end as we could all use a hand in these trying times, and especially while trying “time”. 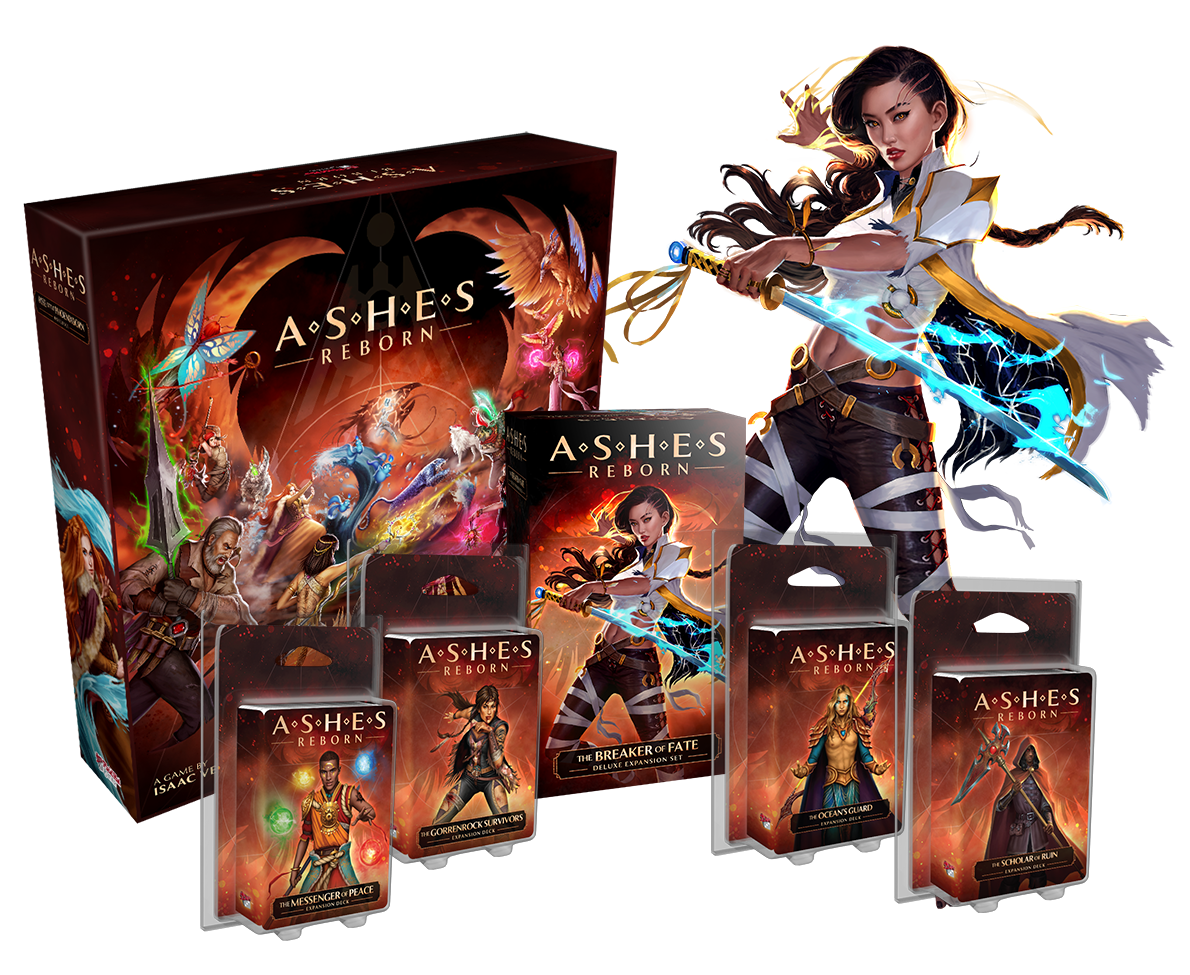 The Breaker of Frontlines (Re-Jericho)

Jericho’s deck introduces us to the wonders of time magic. Use it to push the action system to its limits: summon units that are slow (Turtle Guard), fast (Time Hopper) or even conditional (Swift Messenger). More importantly, time magic enables players to control the pace of the game with a bevy of cards that reward a more opportunistic approach to the game as they look to seize their moment. Jericho is especially great at showcasing this aspect with a deck that reflects her vast amount of experience. Spells like Blink and Stasis enable aggressive fast play and removing blockers, but they’re also good for slowing down and reinforcing development. Time Hoppers can swing super aggressively, but they can also amass a larger threat later through the efforts of a well funded Standard Bearer. Even Turtle Guard can switch from providing a thick wall to dragging down other units with its Focus 1 ability. When it comes to Jericho’s deck and time magic as a whole, the key strength lies in precision and the power of minor adjustments, using them to create small but powerful windows of opportunity. Using Accelerate to give yourself one additional side action may not seem like a big deal, but it could easily swing an entire game with the right setup. 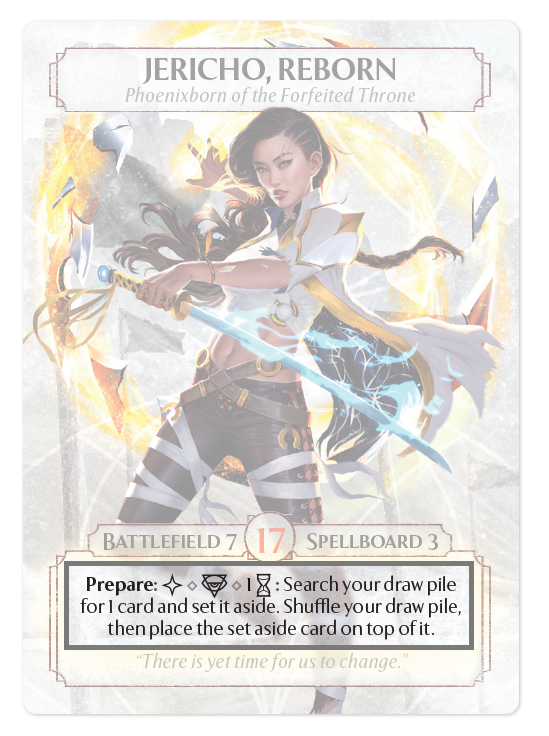 Speaking of minor adjustments, we have to talk about Jericho’s Prepare ability. As the lynchpin that holds the deck together, having the ability to fetch any card in your deck is tremendously valuable, even if you won’t have access to that card until the following round. Going back to fast vs. slow, you’ll have to decide when it’s better to set up for the future, or use one of your forced draws to get a winning card for the current round. Planning and execution go a long way with Time Phoenixborn in general, and more so with an ability like Jericho’s. 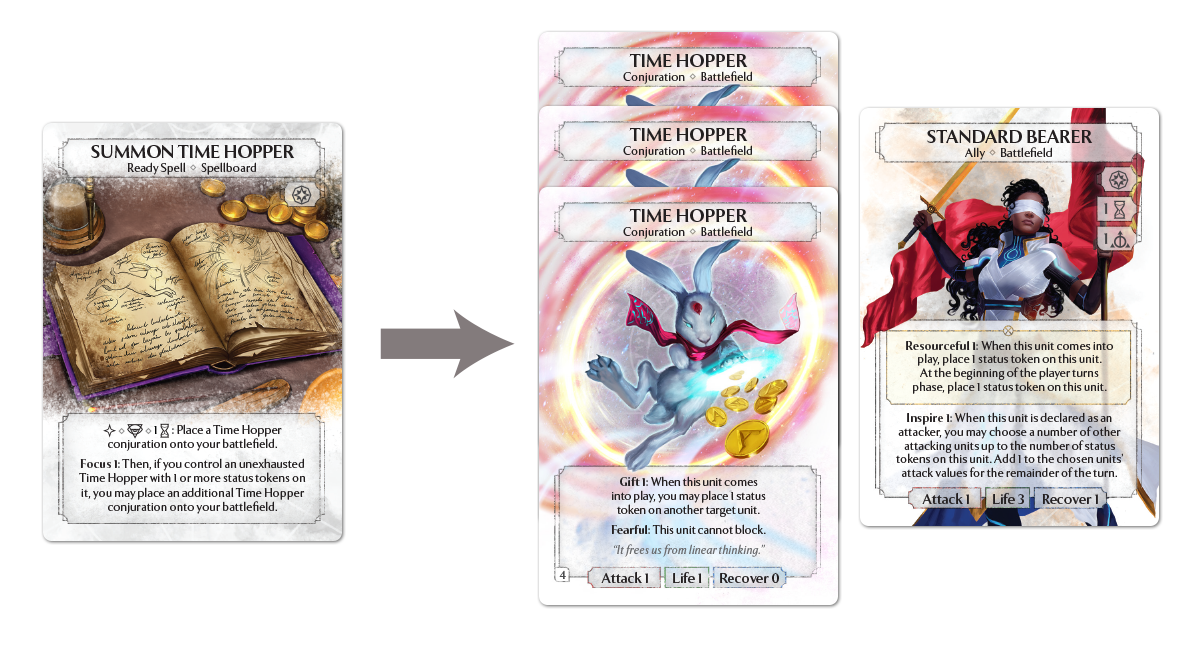 Despite all the technical jargon, the game plan of this re-con is actually pretty straightforward, and nearly identical to the original. Your general objective is a swarm victory: building out small armies of Time Hoppers using their Focus 1 to duplicate, and swinging off the back of a Standard Bearer for wide, powerful attacks. The final turn of the game will probably look something like this: Play Accelerate (probably drawing a prepared card), then using two side actions to summon any remaining Time Hoppers and/or removing blockers with Blink or Stasis, then finishing with a full board swing holding a Flash Strike to threaten the last 2 points of damage to close out the game.

The goal here will be keeping Jericho on track to win via this objective, and that’s where some of these swaps come in. While I like Foresight, we’ll be switching to Fighting Spirit to help promote stronger pressure on offense while making it easier to reassemble larger secondary threats later. Additionally, we’re adding a uniquely positioned top-draw tool in the form of Excavate, which not only gives us more ways to draw our prepared card but also includes some much needed point removal for larger defensive threats. Blink and Stasis are nice, but getting rid of threats permanently has its perks too.

However, the biggest change to this version is the inclusion of…lots of situational singles. Cards like Backtrack, Disengage, Fate Reflection, Summon Omen Bringer, and Adept Duelist are not mainstays for the bulk of our strategy. One area where the precons sadly suffer is a variety of options, and it’s a quality that can be well utilized in the hands of certain Phoenixborn like Jericho. We actually used a very similar strategy back during the Coal Re-con: load the deck with a slew of highly specific singles and use them to beat specific situations. The difference is that while Coal had the ability to toss cards that didn’t help the current matchup (getting free damage in the process), Jericho’s strength is getting those cards exactly when you need them. Prepare is good for getting additional tortoise and hare books, but it’s fantastic for finding silver bullets – quirky cards that can badly cripple certain strategies when applied properly. Adept Duelist or Backtrack might be just what you need to bring down an annoyingly effective giant unit, while Fate Reflection can be the absolute bane of timely Aradel, Xander or Lulu plays. There’s even some proactive options, like Omen Bringer as a replacement for Turtle against hyper defensive decks, Disengage as a way to allow Standard Bearer to attack safely against larger threats (while still buffing your hoppers), and Stand Still as a method to remove large chunks of conjured blockers to push the win (Ash Spirit comes to mind). Because there’s no limit to what Jericho can fetch, having a stronger batch of variety goes an extremely long way.

This opener is much trickier than first appearance suggests. On the first round, your gameplan is to play out your three books and ally, usually in the order of Turtle into Bearer into Hopper, giving the status token to the Bearer. After dropping 4 of your 5 cards, use Jericho’s Prepare to grab a second Time Hopper book (or perhaps a silver bullet card if you desperately need one), and finally play Expand Energy to draw the prepared card and a bonus card that you should easily be able to play (your opening hand plus second Hopper book takes about 8 dice to play in full). By the end of the first round, assuming no foul play, you can assemble a total of 3 rabbits, 1 turtle, and a Standard Bearer with 3 status on it. Not terrible for a first round.

Your opening round strategy, however, hides a cruel trick: It requires a delirious density of side actions. You’ll need two side actions for Turtle Guard (three if you need to meditate), 1 for each Time Hopper summon (two total), 1 for Fighting Spirit (two if you want to activate it), and 1 for Prepare. Five to seven Side actions are required in round 1, compared to the paltry 4 mains (+1 for each attack you perform). Over the course of the first round, you will find yourself painstakingly busy every turn; you should basically never forgo a side action on round 1 with this deck. In fact, if you’re able to sneak an early pass without ending the round, you’ll give yourself a tremendous amount of breathing room. Granted, you won’t always have the time to do that, but even one extra side action taken can provide lots of mental relief. What’s ultimately most important every round of the game is making sure you take advantage of Prepare, it truly is the main reason to play Jericho. 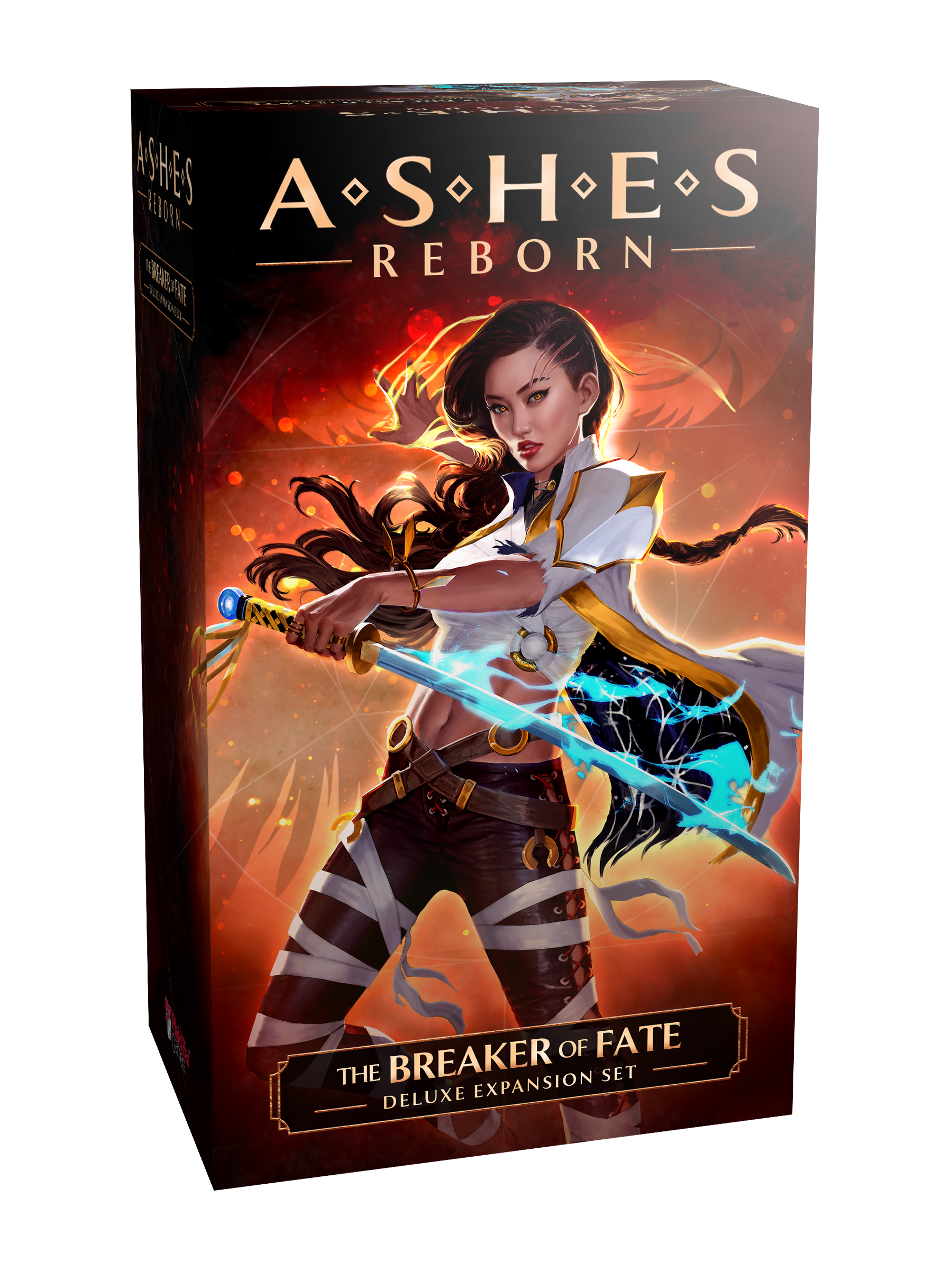 Whew, talk about punching the clock! I think we’ve created one of the most expensive individual re-cons of all time. We didn’t skip a single time expansion, and for a brief moment I had almost added Victoria’s deck just for To Shadows (hybrid Time/Illusion card). Well, the craziest thing about this deck is that you probably don’t need more than 1 or 2 of the other time expansions to push this deck pretty far. Rejoice budget players, you haven’t been abandoned.

I think I’d focus on Queen of Lightning – Adept Duelist is quite strong on its own and Disengage can be super helpful with all of your allies – as well as The Ruin Scholar – Excavate fills so many useful roles here, and the not-featured Knowledge Seeker is pretty decent with Blink. There’s also a good argument for The Ocean Guard – Stand Still is such a uniquely effective bunker buster against defensive conjuration walls, and Blood Hunter can add some strong aggressive options to your deck. Whichever direction you go, Jericho’s flexibility can make your choices shine. 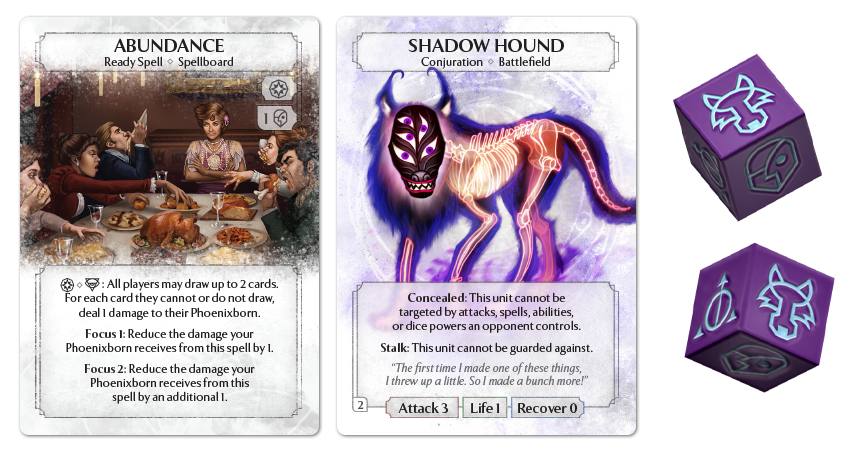 I’ve said it many times in the past, but mono-color decks are awfully limited in this game. As secondary dice types go, I’m a particular fan of Illusion with Jericho, especially the card Abundance. An ideal turn usually involves Prepare at side, use Abundance main to draw the prepared card for free. While there are several good spellboard options for drawing mid round, Abundance is one of the few I know that can do it for a Main Action, and at no dice cost. Speaking of Abundance, I’m also keen on high-focus strategies in Jericho, as Prepare is so strong for guaranteeing the extra books. To this end, I’m often drawn (ha) to Summon Shadow Hound and its Focus 1+2 abilities. This allows the design of the deck to flip between playing aggro to control on a dime, either swinging with powerful attackers or walling up and winning via Abundance.

Of course, another area to emphasize might be Blink, a powerful tool that lets you double down hard on powerful 3+ cost units. While not absolutely groundbreaking, there’s something to be said for just loading up your favorite big allies and using Blink to get multiple attacks per round. Within the wheel of time, you have access to Realm Walker and Gorrenrock Brawler, but stepping parallel offers other solid paths like Master Vampire, Hammer Knight, or Sonic Swordsman. Have you ever blinked an Iron Rhino?

That’s all we’ve got for this article. Join us next time as we explore some sweet surfing lizards in Lulu’s amazing “fun in the sun” water park. Serious decks only, thank you.

Andrew DiLullo is an animator, a game designer, and luckily also a writer. Having first discovered Ashes at the tail end of the first round of expansions in 2016, he’s been playing ever since and currently heads the Bay Area Ashes group in California. He’s made a lot of fan content for Arkham Horror LCG, crafted a free board game on Tabletop Simulator, is currently designing a board game in his spare time, and occasionally writes on his online journal: The Lighthouse Library.

The Master Set!
Ashes Reborn: Rise of the Phoenixborn
$49.95
2
14+
30-60 minutes
Choose from six Phoenixborn in this Ashes Reborn base set, using imaginative cards and custom dice to summon faithful allies, combine powerful spells, and outwit your opponents in a fast-paced back and forth barrage of well-crafted magic and strategic skill. 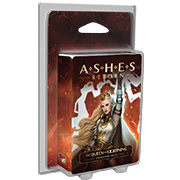 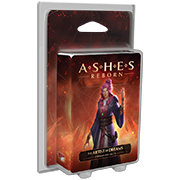