The Scholar of Ruin Preview #1

The vision unfolded before me and I saw two great fiery birds arise from the depths. One smoldered as it burst from the ocean and as it spread its wings, it carried upon its train a host of lifeforms never before seen by human eyes. The other arose from cracked recesses within the ground, its cries speaking the language of ruin, and upon its head was stamped the name of Blasphemy.

I cannot explain why, yet I am certain this was my final revelation. Whatever is yet to come, I do not think I shall survive it.

Welcome back, Ashes players! It is finally time to resume preview season for the upcoming releases, The Scholar of Ruin and the Ocean’s Guard! Today we will dive into one of my favorite aspects of ceremonial magic: chant spells! Chants are a recurring theme in ceremonial, featuring repeatable effects that require the death of an ally to charge up. While they can be expensive to get rolling, their value can snowball over the course of a game. Let’s see what chants Rowan brings to the table! 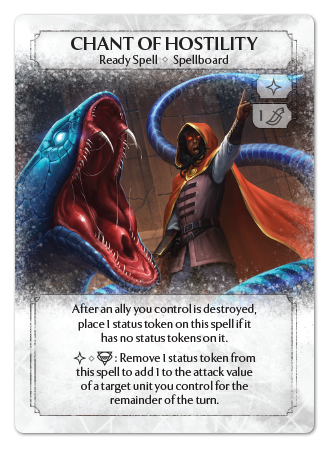 Ready Spell. Side, 1CC
After an ally you control is destroyed, place 1 status token on this spell if it has no status tokens on it.

Side, Exhaust: Remove 1 status token from this spell to add 1 to the attack value of a target unit you control for the remainder of the turn.

Chant of Hostility is a simple but effective spell, providing just enough of an attack boost to help Rowan trade up with his units, pressure the opponent to guard with their Phoenixborn, or just push through just a bit more damage alongside a big attack. 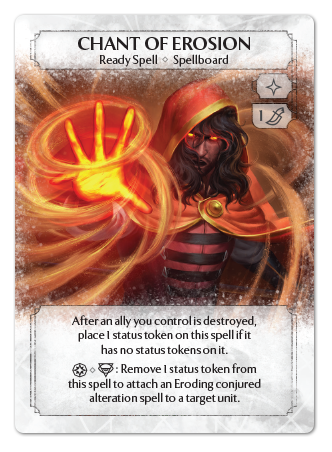 Chant of Erosion and Eroding

After an ally you control is destroyed, place 1 status token on this spell if it has no status tokens on it.

Main, Exhaust: Remove 1 status token from this spell to attach an Eroding conjured alteration spell to a target unit. 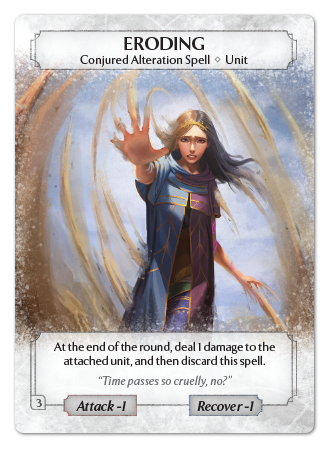 At the end of the round, deal 1 damage to the attached unit, and then discard this spell.

Chant of Erosion offers incredible control of the battlefield to help Rowan stabilize during his quest to discover Red Raindrops in the ruins of Abylon Outskirts. Rowan’s journey will take some time, so being able to diminish incoming threats and chip away at them round over round is an essential tool in his arsenal. 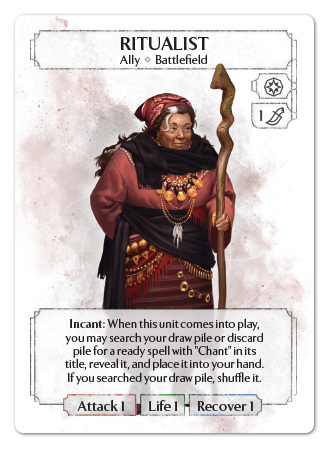 Incant: When this unit comes into play, you may search your draw pile or discard pile for a ready spell with "Chant" in its title, reveal it, and place it into your hand. If you searched your draw pile, shuffle it.

Chants are nothing without the allies that fuel this dark magic, and Ritualists are the perfect companion ally for them! Ritualists work to both expand your access to chants, while also summoning an ally, ready to sacrifice itself for the cause. Ritualists are also a great option for use with Rowan’s ability set for when you are in need of stacking up your chants, or need an on-demand sacrifice to begin charging them up!

Before we wrap up today’s preview, there is one last thing. In Rowan’s debut preview, we revealed Rowan’s unique spell, Discovery. Within the depths of the excavated ruins, Rowan is able to use his superior knowledge of Argaian history to discover dark and powerful Red Raindrop artifacts. It looks like he’s found one now! 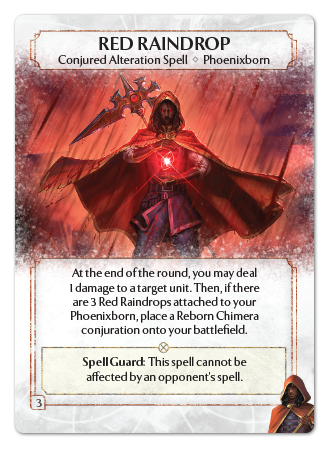 At the end of the round, you may deal 1 damage to a target unit. Then, if there are 3 Red Raindrops attached to your Phoenixborn, place a Reborn Chimera conjuration onto your battlefield.

[INEX: Spell Guard: This spell cannot be affected by an opponent's spell.]

Red Raindrops are the essential element of Rowan’s ultimate plan to become the most powerful Phoenixborn in Argaia. He has spent a lifetime studying in secrecy under the noses of the Vermillion Council, a mysterious organization dedicated to study of the Phoenixborn. Little did they know, his insatiable appetite for knowledge would be the catalyst for undoing all that the Phoenixborn had done to save the world from the chimeras of the Red Rains. What happens when Rowan finds enough Red Raindrops to complete his mission? Stay tuned to find out!

Get your Master Set!
Ashes Reborn: Rise of the Phoenixborn
$49.95
2
14+
30-60 minutes
Choose from six Phoenixborn in this Ashes Reborn base set, using imaginative cards and custom dice to summon faithful allies, combine powerful spells, and outwit your opponents in a fast-paced back and forth barrage of well-crafted magic and strategic skill.