Welcome back, Ashes players, to another installment of Re-Constructed. Thanks for joining me on this lovely stroll through the woods under the full moon. I’m sure absolutely nothing bad will happen.

By this point, you should already know the deck building restrictions we’re working with, and with these divine and sympathy magic decks you’ll also need “The Law of Lions” or “The Song of Soaksend” accordingly. Today’s deck is all about despair, and utterly crushing every attempt at defensive play. It’s been a while since Noah, so I figure we’re overdue for some swarm tactics. However, unlike other swarm decks that might be incentivized to go all in, this one is taking it a bit slower...and pulling some deadly strings. 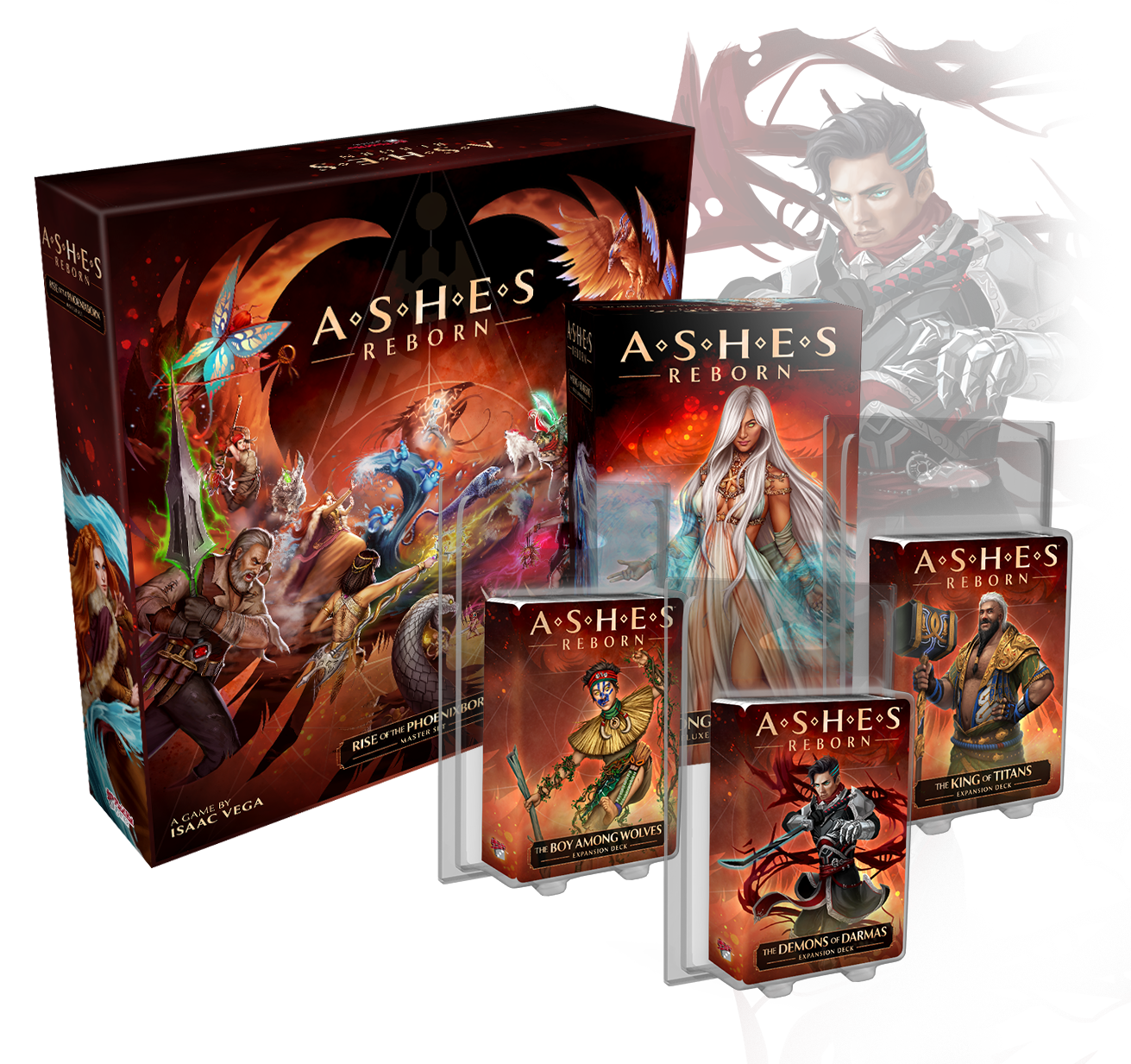 5 Ceremonial, 5 Sympathy // Required Sets: The King of Titans, The Boy Among Wolves

Harold’s pre-con is aggressive, to say the least. Nearly half the deck is just allies, of either the vampire or werewolf persuasion. Beast Warriors and Mages are units with variable statlines, getting stronger or weaker with lunar phases (or, the first player token, in this case), while Psychic and Master Vampire are powerful pressure attackers that exploit tricky openings in the opponent’s defense. Vampire Bat Swarm is a rather persistent conjuration that is annoying either as a solo attacker or with a trio thanks to Group Tactics, and has the nasty ability to respawn itself for only 1 die...continuously. Normally the trick is to ignore the bats since their Swarm ability is exhaustible, but Harold’s Mark Prey is superb at forcing the issue while also easily enabling nasty surprises through Consume Soul. Rounding out the rest of the deck is a surprising amount of dice fixing with both Transmute Magic and Dark Reaping, a versatile refresh tool with Adrenaline Rush (something we highlighted with Dread Wraiths back in Brennen’s deck), and Drain Vitality, a spellboard tool that keeps our bigger threats healthy while pinging down the chumps. Packed in this rather simple package is a terrifying amount of overall board control that actively mocks your opponent’s attempts at mounting a defense...most of the time. Sadly, for all the nightmarish power on display, sometimes all it takes to bring it down is a sufficiently efficient blocker (most things with “Spirit” in the name), or lots of pings and board wipes (Nature’s Wrath and Mist Typhoon are murder). The precon is solid, but also fairly one-dimensional. If you go up against big threats, you tear them down with ease, but throw a pack of weenies and he can’t quite concentrate them down (and only Beast Mage can really ignore them).

So, we’re trying something a little different. I’m only slightly peeling away at Harold’s strengths -- this version’s swarm striking won’t have quite the same viciousness to it -- but in return we’re getting some much needed solutions to the pre-con’s problems. For the wider boards, we’re bringing in some nifty crowd control to strike down the weaklings with ease. As for the AoE damage problem, we’re going to solve that with both some card adjustments and an adjusted swarm strategy that focuses harder on Group Tactics. 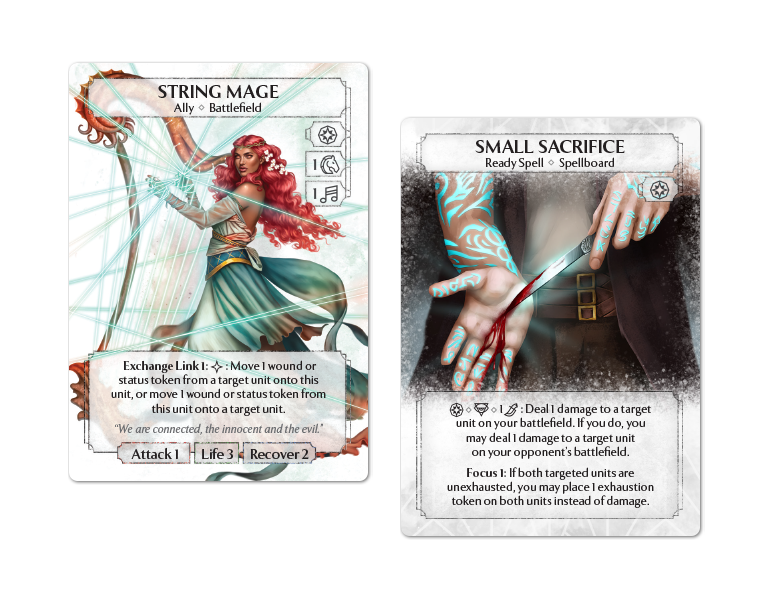 Let’s start with two of our scariest new additions: String Mage and Small Sacrifice. Veteran Ashes players might be familiar with this one: Use Small Sacrifice to deal 1 damage to an opponent’s unit and 1 to your String Mage, then use String Mage’s ability to move that damage onto an opponent’s unit. One die and a full turn for 2 spreadable damage, one of which isn’t even preventable (goes through Armored, doesn’t trigger damage abilities, etc.) is tremendously strong, and offers a staggering amount of utility. This can be used to wear down larger threats, but the sweet spot is using this to quickly knock out multiple 1-life units in the same turn. This is also a case where just the threat of violence is often enough: If your opponent refuses to play their small units, start building up a swarm and force the issue. If the opponent plays AoE to clear it, the String Mage is probably still kicking around and causing problems. It’s a little mean, but part of playing Harold is all about instilling a sense of despair; you really want your opponent to feel like they have nothing but bad decisions ahead of them.

Speaking of nothing but despair, let’s talk about our tactics, and also our “Group Tactics”. One of the things we want to avoid in an aggressive swarm deck is overcommitment; if we build up a ridiculously powerful board of about 4-5 units, and our opponent plays Nature’s Wrath, we might just lose on the spot. So, our overall strategy is something I’m calling “tricky triads”, in which we create squads of three units and attack with them before summoning more units. To make sure these three-unit squads are packing enough of a punch to be worthwhile, we’ll be taking full advantage of the Group Tactics ability present on many of our units and our newly added Join the Hunt. Attacking in waves may seem like a non-ideal way to approach swarm, but if our units always have high attack values, our opponents should have a hard time keeping blockers around. Join the Hunt can be especially useful if any of our attacking units don’t have Group Tactics already, like Raptor Herder who normally only swings in for a measly 1. With this strategy, Vampire Bat Swarm starts feeling like a power player; if your opponent kills the bat on this attack wave, you have the option of spawning an immediate replacement for the next tricky triad. 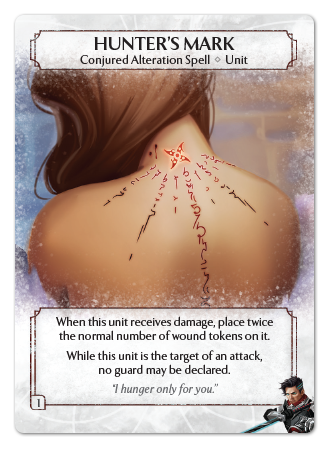 We can also force tougher exchanges with some unorthodox use of Hunter’s Mark. The biggest advantage of Hunter’s Mark is that it enables unguardable attacks, but we can still use it rather effectively for its damage amp. While we do want to hit our opponent’s face as hard as possible, we do also want to stop them from beating ours too freely, and something that can easily get in the way is having our opponent’s units actually survive our attacks. Something that can also get in the way is our opponent having blockers at all. See, Hunter’s Mark is always a promise of sorts: “That unit, that one right there, it’s DEFINITELY going to die this round.” What’s important is that we don’t specify exactly when, leaving some wiggle room for our opponent to make mistakes. As an example, an opponent might see a unit with a Hunter’s Mark and decide the best course of action with it is attacking before it gets killed. Of course by doing that, they remove what could’ve been a crucial blocker on our next big swarm attack...also we’ll probably just kill it later with Anchornaut or String Mage with Small Sacrifice. You know, at our leisure. 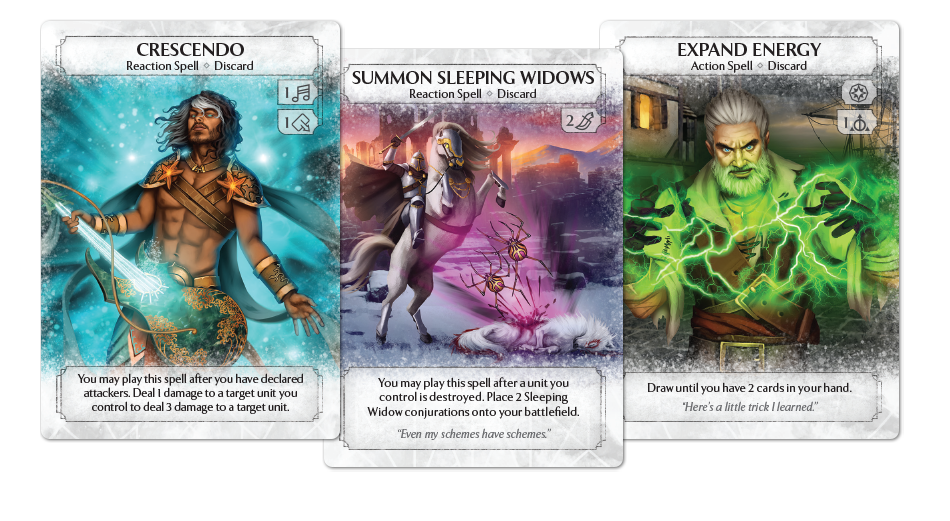 Among the other new additions are a few techy singletons. Crescendo can lead to some disastrous attacks in which you kill a potential blocker mid-attack, which makes it a good game finisher if used at the right moment, or a solid tempo swing if you have a String Mage to absorb the damage. Sleeping Widows is a nice mobilizer; use it after swinging with a wave and losing an attacker to prep the next wave ASAP, or after an opponent attacks one of your exhausted units to mount an immediate counteroffensive. We also have a couple copies of Expand Energy to help keep us going; our overall costs are low, so having cheap hand refills could easily lead to a third wave of attacks in one round.

There’s actually a lot of ways to build a first five in this deck, and it really depends on how fast or slow you want to move. Literally the only constant will be Summon Vampire Bat Swarm, everything beyond that is preference. I think you probably want at least one other spellboard card. String Mage with Small Sacrifice gives you more of a control edge, while Join the Hunt with basically any other ally gives you a stronger early presence. You almost always want Raptor Herder, which can be forcibly killed with Small Sacrifice and brought back with the ceremonial dice power for a double Herder play, but also does well with Join the Hunt as a way to force more muscle through. Sleeping Widows in the opener practically guarantees you’ll be able to swing with two triads in the first round, and that’s actually pretty rough for most opponents. Starting with a Beast Mage or Master Vampire can be fantastic against exhaustion decks, but your standard picks can handle most other matchups decently enough. Generally speaking for this deck, your opener wants at least two spellboard cards and two allies, but you should experiment to find what you enjoy the most. 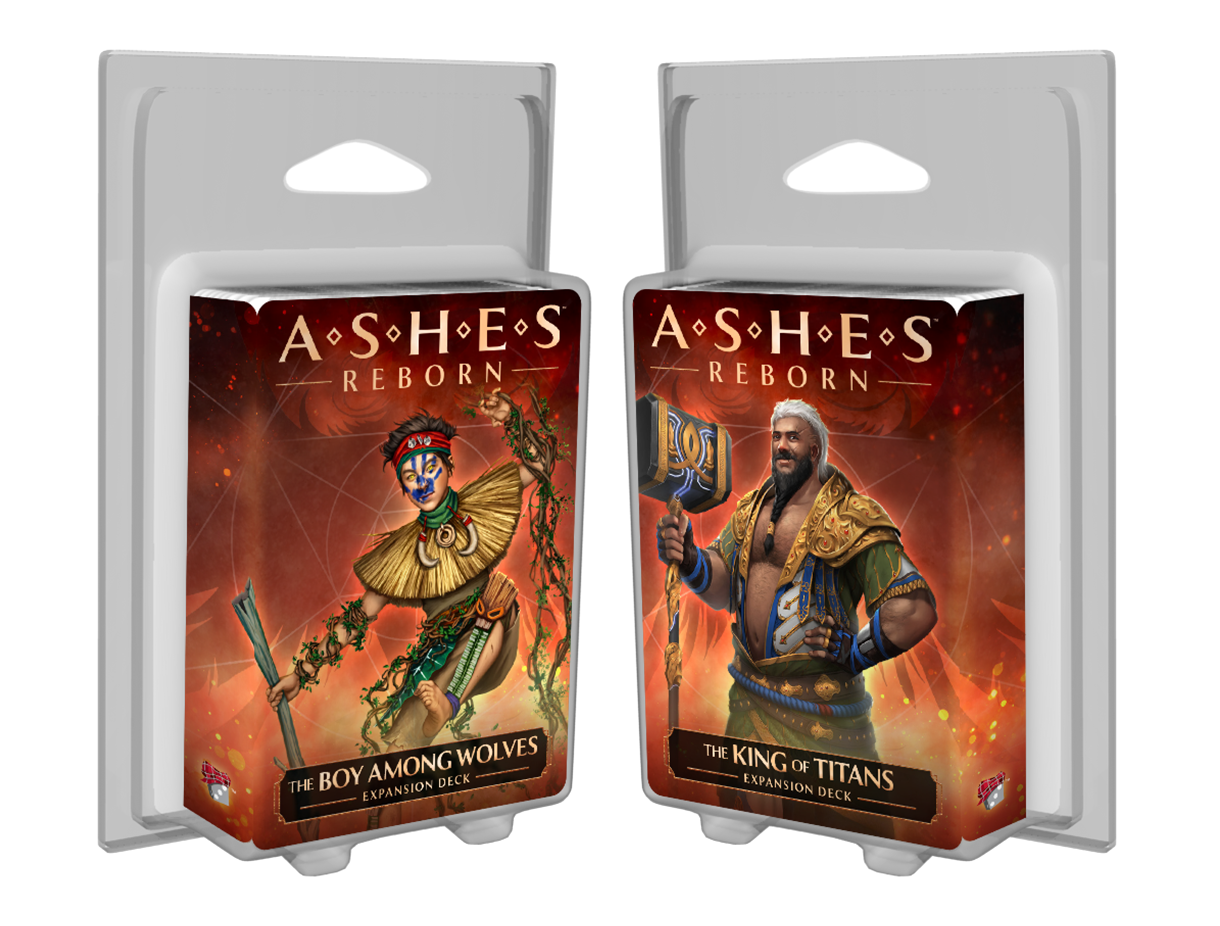 These expansions feel a little too light in presence for this deck, but the inclusions are pretty strong. Getting The King of Titans just for Raptor Herder may seem a little silly, but that card is just so perfect for this style of swarm deck. Join the Hunt is slightly less important of an inclusion, and could be replaced with another decent swarm enabler: Summon Salamander Monk. Losing Join the Hunt does mean losing some of that “triad” strategy, but Salamanders are good at using Hunter’s Mark to the fullest. If you find yourself relying more on your larger units more often, you can also reinclude Drain Vitality to give yourself stronger control.

Given how cheap many of your allies end up being, there’s a serious call to include Shatter Pulse in this deck to really open up the second or third attack waves, though I’d be more inclined to go with additional Crescendos. Rather, what we could actually use is some solid card draw: New Ideas is stronger than Expand Energy in a lot of cases, and while I really enjoy Join the Hunt in this deck you can probably get more mileage from Changing Winds or Chant of Worship. If you’re willing to push Sympathy a little harder, River Skald starts looking mighty appealing. 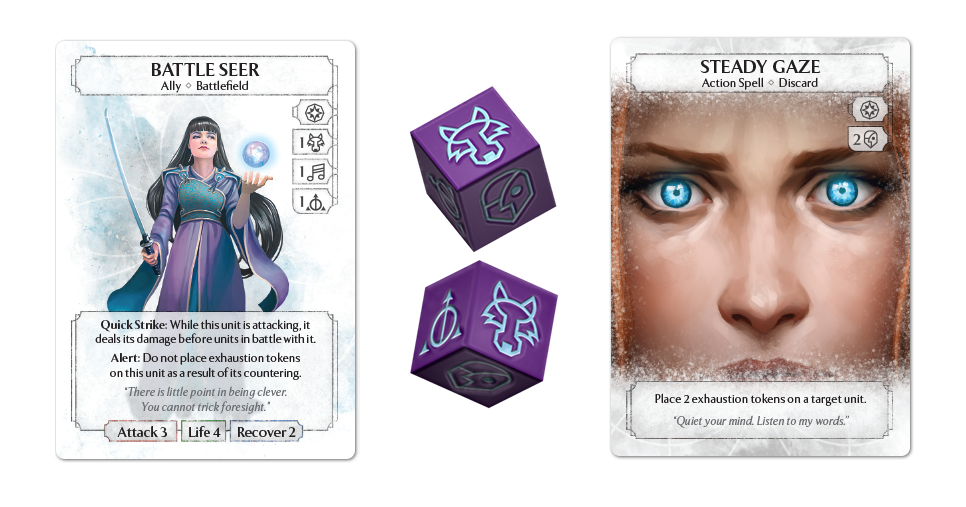 If you’re looking to mix and match out of color, I really enjoy splashing into illusion magic. Battle Seer and Spectral Charger Mount both go excellently with Hunter’s Mark since they always get a clean kill, and the mounts can be rather effective when you tuck a Raptor Herder. I also start eyeballing Steady Gaze as an effective way to close a blocking option for multiple rounds, and given how often we’re attacking per round those exhaustion tokens can go a long way. Blood Chains would also be a good option, but so many of our units only have 1 life so it’s hard to justify that inclusion.

That’s all we’ve got for this article. Come back next time as we look into one of the few community driven Phoenixborn designs and the supplier of many of our divine magic decks, Sembali Grimtongue.

Ashes Reborn: The King of Titans
$14.95
2
14+
30-60 minutes
Balance the power of Nature and Divine magic to unleash the titans of the desert on unsuspecting prey with Xander Heartsblood.