Welcome back, Ashes players, to another installment of Re-Constructed. Yep, looks like you’re on the guest list; there’s a seat over here with your name on it.

By this point, you should already know the deck building restrictions we’re working with. If you do need a refresher, you should check out our many previous articles in the Re-Constructed series. We’ve showcased many exciting and thrilling ways to win through units, burn, and a fair bit of trickery, but something we haven’t really touched yet is the ever elusive ‘exhaustion’ victory. That simply won’t do, and I’d say our host of the evening is inclined to agree. 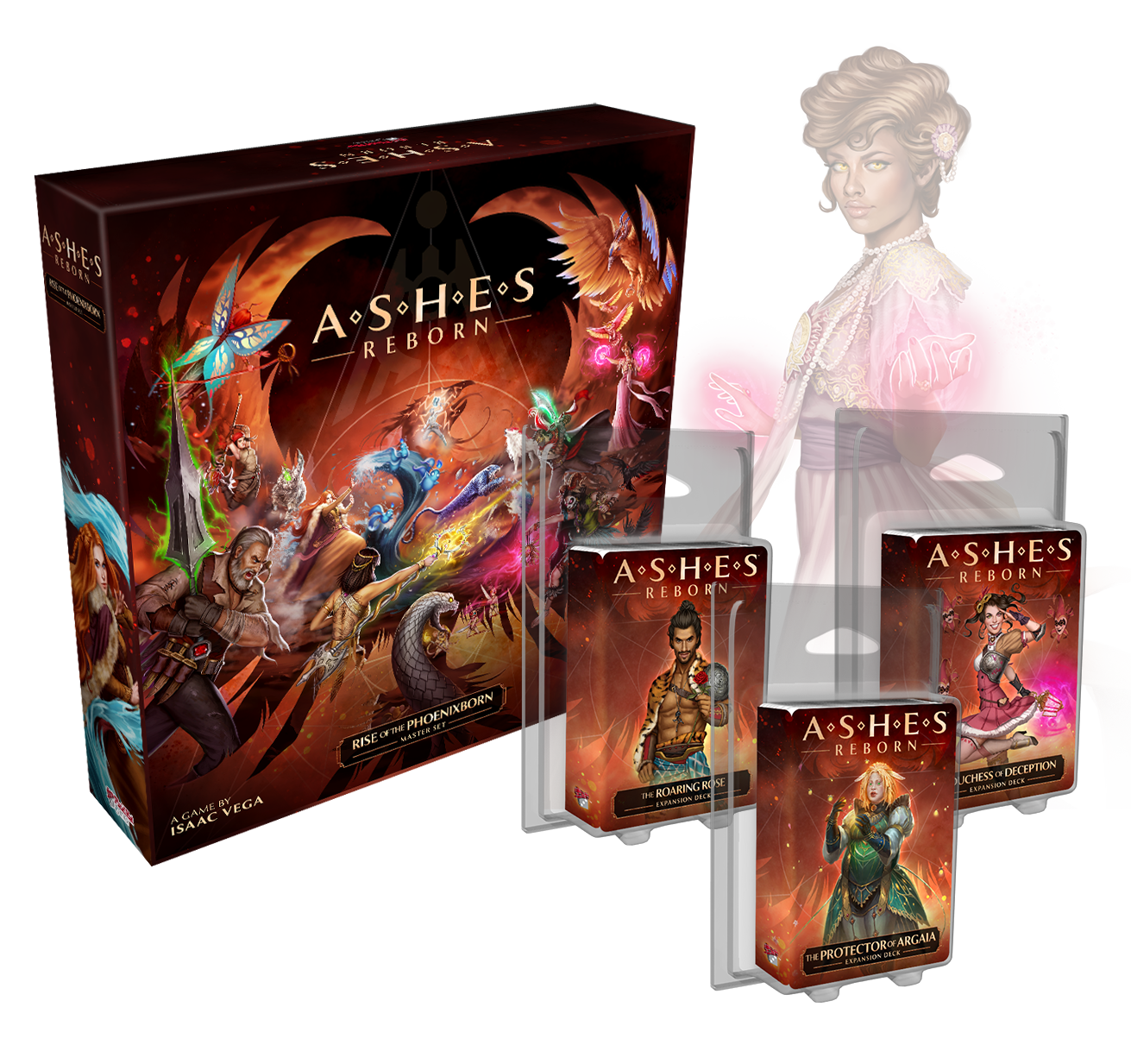 4 Illusion, 6 Charm // Needed Sets: The Roaring Rose, The Duchess of Deception, The Protector of Argaia

1x Figures in the Fog

In Ashes, when a Phoenixborn runs out of cards in their deck and needs to draw more during upkeep, they take 1 direct damage for each card they’re unable to draw. This is normally intended to be a tiebreaker for overly long games, but there’s also a bevy of cards that seek to use this rule as their main method of winning the game (most of which exist in charm magic). Enter Saria, a Phoenixborn built specifically to entertain this particular fashion of deck.

If you’ve ever played Saria’s pre-con before, you know the overall gameplan: play owls and grind your opponent’s hand down to dust, while using Abundance and Purge to shred the opponent’s deck with haste. Spells like Seal and Sympathy Pain, along with units like Seaside Raven, Enchanted Violinist, and Rose Fire Dancer give us ways to punch down and control the board, and Saria’s ability plus Hidden Power keep filling us with fuel all the while. However, in looking at this re-con list, you might notice one noticeable absence this time around: no Abundance. To me, it always felt a little weird to play Abundance in this deck since all that extra card draw kind of mitigates the effectiveness of Owls and also gives our opponent lots of replacement threats for all the cards we’re getting rid of. In a weird way, I think Abundance is just as likely to advance a win condition as it is to lose us the game. For the re-con, we’re slowing things down a notch, aiming for a longer game with a deck more reliant on smart synergies and combos. I’ll talk about a few of those here, but I think it would be fun for you to discover the rest. 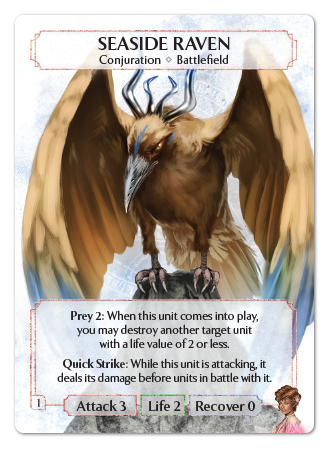 First, let’s talk about the new Seaside Raven, a serious value unit in Ashes Reborn. This powerful predator brings some impressive strengths to the table with its new Prey ability, but also a critical weakness with its 1 conjuration limit. Arguably one of the best ways to get around this restriction while proliferating the bird’s entry ability is Resummon, a deck concept Brian B. already showed off in the building basics series. 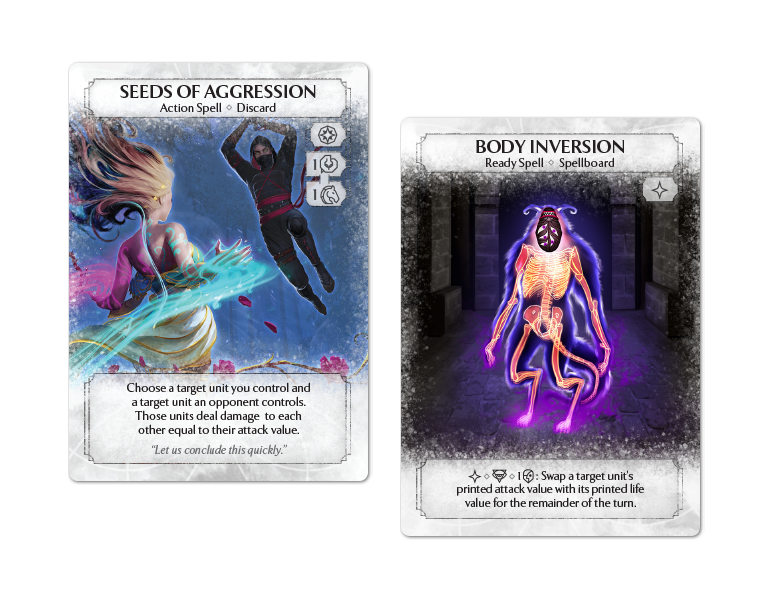 Sadly, here at Re-constructed, we don’t dip outside of our starting dice types, and Resummon requires ceremonial magic. So, we’re going to accomplish a similar goal with Seeds of Aggression, a powerful charm tool that lets you forcibly trade our raven with big units, even while exhausted, and lets us summon another when we need it. However, that extra spellboard opening does provide us with a most clever appetizer for this banquet: Body Inversion. Because the spell switches printed values, it can enable Seaside Raven’s “Prey” to kill units that normally aren’t killable, mostly in the category of things that have 0-2 attack with 3+ life. Say, that’s a really nice Dread Wraith you’ve got there. Be a real shame if anything were to happen to it. 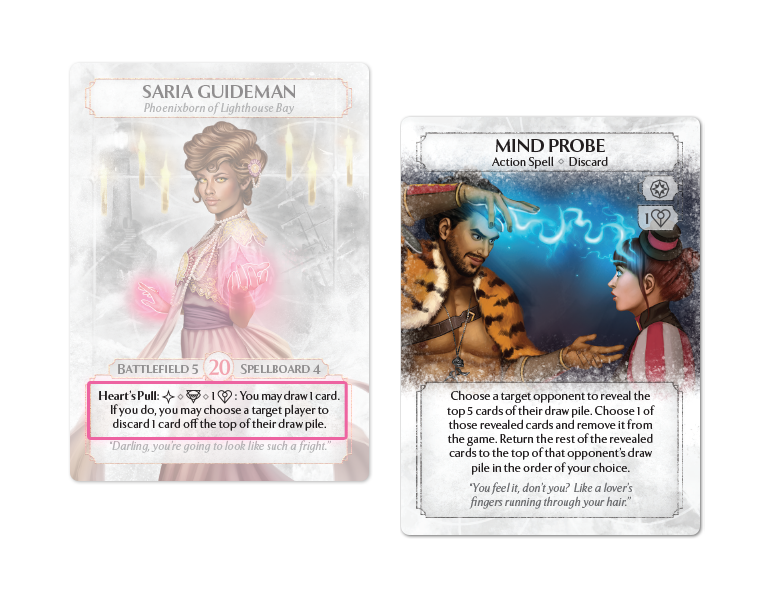 This deck is a veritable buffet of these sort of “wine and cheese” combinations: they look weird together and their combination seems a little gross, but in unison their unique flavors might just surprise you. Just to stick to Body Inversion, ravens aren’t the only positive recipient as it does quite well at decluttering our own board; if your battlefield is full of exhausted owls, use Body Inversion to snip one off and summon a fresh one (Inversion also works well against other control strategies like owls, doves, finches, and especially Living Doll). Next on the plate is Mind Probe, a card which is at most okay, but does gangbusters when combined with Heart’s Pull. Removing 1 card is cool, but knowing exactly what card you mill next is just so satisfying. 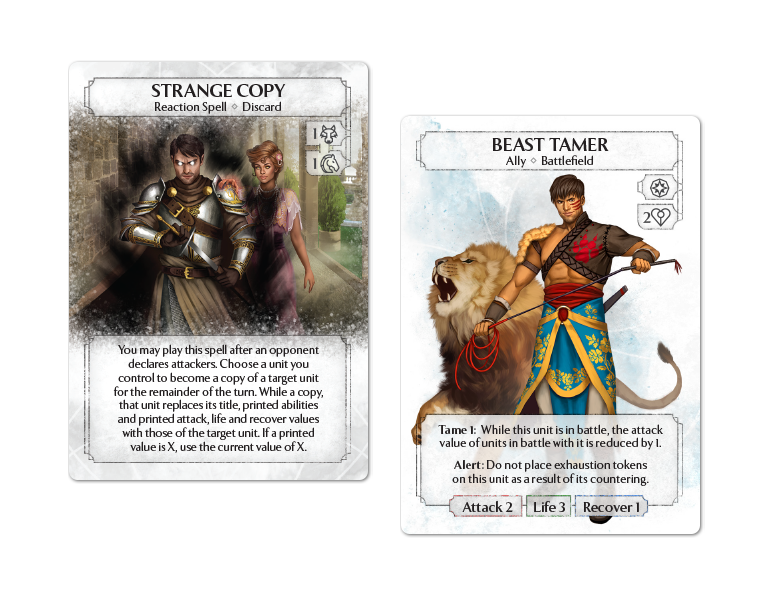 The last bit of synergy I’ll share is Strange Copy, an already solid spell that allows one of your blockers to replicate any unit during 1 attack, usually with the expectation that the unit will die in the process. However, use it to copy a Beast Tamer and suddenly there’s a very real chance your unit doesn’t die on the trade (Tame 1), and will somehow also avoid exhaustion on the counter (Alert). There’s other little nuggets of fun rummaging around, but like I said earlier, I think it would be fun for you to discover the rest.

For the main course, Seaside Raven and Three-Eyed Owl, Purge on the side. You’re entitled to two sides of your choice, and I must warn that such a choice is extremely dependent on the company you keep. Body Inversion is quite solid against many midrange options (thanks mostly to Seaside Raven) while also absolutely wrecking other control decks that run their own plate of 0-attack units. Though, against a more aggressive guest, Enchanted Violinist should be more effective at putting on the brakes. Against some larger units, I might look to open with Beast Tamer to stop them cold. Finally, First Five is a bit misleading; Saria is all about ‘more’ so she actually has a First Six thanks to Heart’s Pull. For that reason, I tend to prefer Hidden Power in the opener since it lets us play flexibly regardless of what we draw, while also providing extra draw in the process. After all, an extra owl book early can completely turn the game on its head. 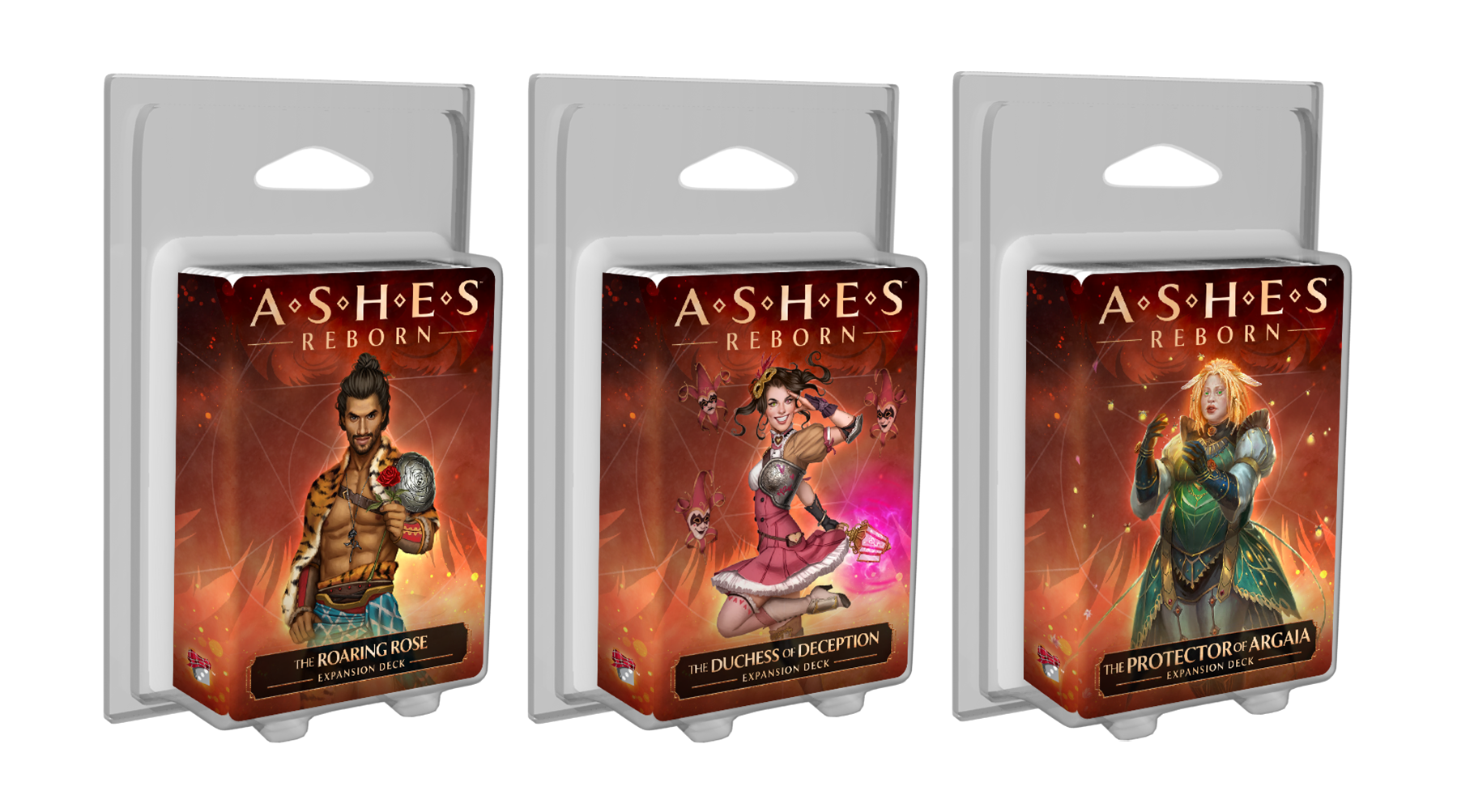 Did we order too much?

A fair question, as any deck that asks for three extra expansions is likely bursting at the seams. The Roaring Rose is fairly essential here, as most of charm magic’s greatest tools and our strongest synergy cards reside there: Beast Tamer is a stalwart defender, Mind Probe is so delicious with Heart’s Pull, and Change Psyche gives us a surprising amount of mid-round flexibility. The other two expansions are closer to seasonings - I wouldn’t call them crucial, but they really bring out the flavor. I’ve already gone to great lengths about all the cool things you can do with Body Inversion, but there will also be plenty of cases where you really don’t need it. As for Seeds of Aggression, I’ve found it to be the most effective way of forcing raven interaction against an opponent keen to ignore it, and having access to a fresh summon is just so important, though both of those issues can be easily mitigated by just splashing into ceremonial magic(with Resummon being the best avenue). If you remove Fiona’s cards, Seeds of Agression can be replaced with To Shadows or Redirect. If you remove Victoria’s cards, definitely add a 3rd SoA and maybe consider a Return to Soil.

Finally, it may seem like this version of the deck is weaker with Abundance being gone, but when your mill strategy is this summon focused, it’s actually better to have the game last more rounds, not less. Purge should still allow you to speed the game up here and there, crucially without giving your opponent more options which Abundance sadly does. Still, if you really love Abundance, I guess we should talk about...

Saria is a nice Phoenixborn because she’s really receptive as this sort of ‘greatest hits’ outlet for mill cards, so it’s really easy to tweak the deck to your particular tastes. You can totally serve up Abundance if that’s more your speed, but another good swap is Purge out for Memory Theft, since it gives you the ability to plan out your round more methodically (especially with all the reactions you’re running). Owls are good, but you can also try out doves, which may fare better with the Abundance route; heck, you can run both if you want (though Saria’s battlefield limit will be a limiting factor here). You can also serve up other control options like Remorse, Shadow Strike, and Steady Gaze, or surprise your opponent with False Demons - all options that improve with the Memory Theft inclusion. Don’t like swarm units? Throw in another Violinist and a few copies of Return to Soil to clear the board and advance your win con. 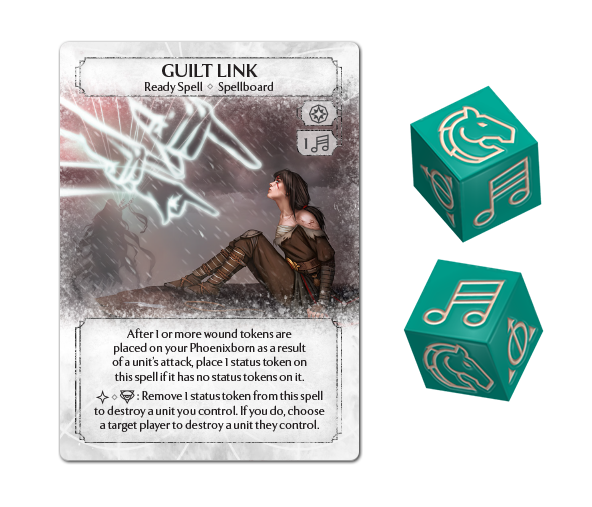 Looking for another dice type? I don’t know if you’ve noticed, but many of your cards already share parallel costs with sympathy magic, making it the easiest splash and offering options like Essence Druid and Shatter Pulse. My personal favorite is Guilt Link, which acts both as an attack deterrent and another striking tech generator with all your conjurations. With a charged Guilt Link, you can activate an owl and immediately sack it to kill an opponent’s unit, or you can sack a raven for one kill and immediately play another raven for a second kill through prey.

That’s all we’ve got for this article, but maybe stick around for dessert. I hear Leo has prepared an exorbitant floral-themed finisher that should amplify the evening nicely.

Pre-Order The Master Set!
Ashes Reborn: Rise of the Phoenixborn PRE-ORDER
$49.95
2
14+
30-60 minutes
THIS IS A PRE-ORDER! Choose from six Phoenixborn in this Ashes Reborn base set, using imaginative cards and custom dice to summon faithful allies, combine powerful spells, and outwit your opponents in a fast-paced back and forth barrage of well-crafted magic and strategic skill.

Pre-order The Protecter of Argaia!
Ashes Reborn: The Protector of Argaia BACK-ORDER
$14.95
2
14+
30-60 minutes
Fiona Mercywind schemes to end the war that has disturbed the natural balance of her homeland, pulling her power from charm and sympathy dice. Deck expansion for Ashes: Rise of the Phoenixborn.