Stalkers in the Mist

Welcome back, Ashes players, to another installment of Re-Constructed. We covered an expansion last time, so let’s take another shot at the core set. And since we’re focusing on Aradel Summergaard, we’ll probably take that shot with a water gun.

By this point, you should already know the deck building restrictions we’re working with. If you do need a refresher, you should check out our previous articles on Maeoni, Rin, Noah, and Brennen. Best be prepared now! Once we foray into the mist there’s no going back: 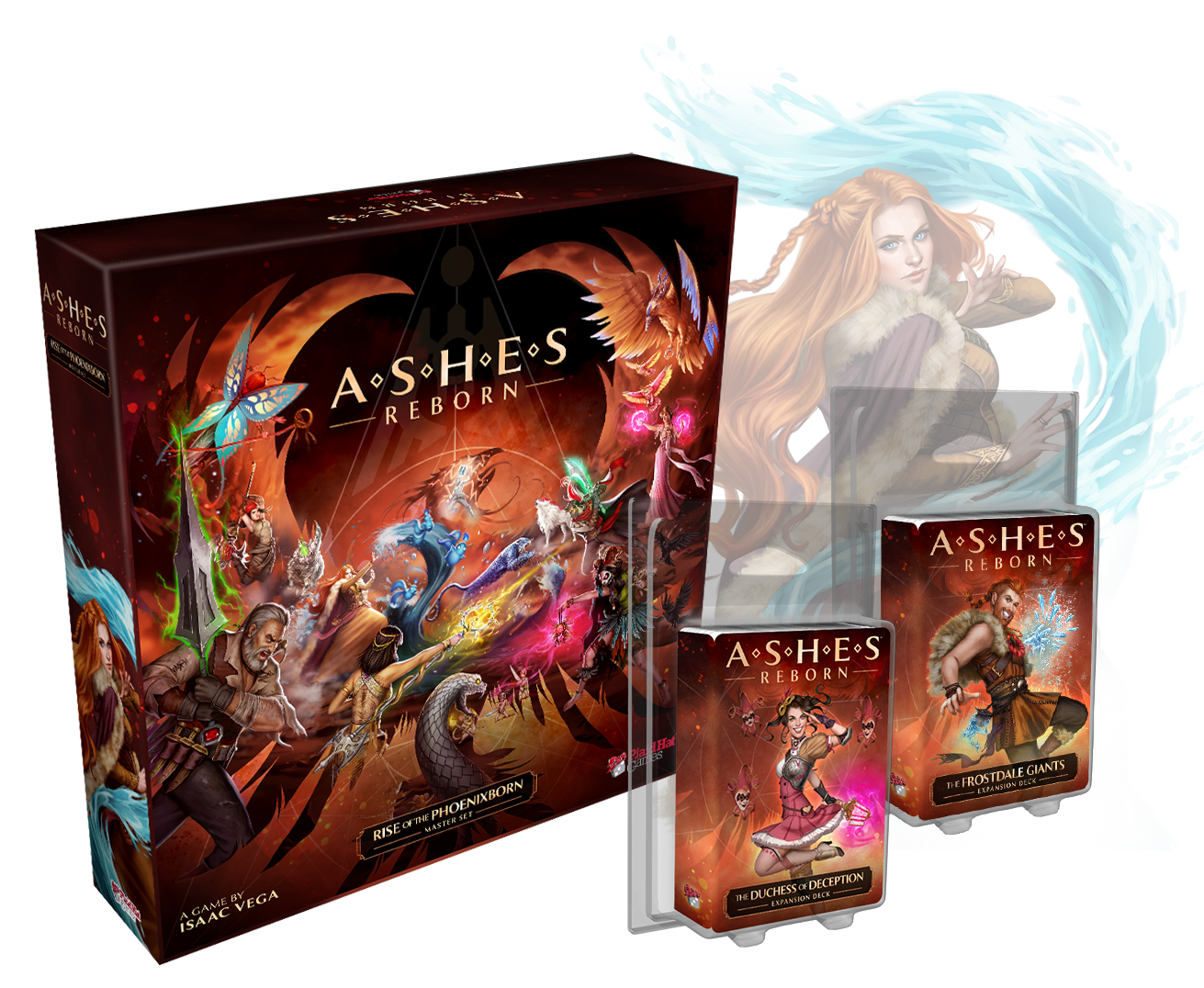 3x Out of the Mist

1x Reflections in the Water

Aradel's pre-con is excellent when you’re first learning the game. Her ability is simple and powerful, her spellboard is largely straightforward, and none of her cards create any confusion outside of maybe Reflections in the Water. The key strength of the deck and Phoenixborn has always been board control. Out of the Mist and Steady Gaze excellently address larger threats while Massive Growth give us a way to match them. Meanwhile, Mist Typhoon, with our often large conjuration spread, provides a solution to loads of smaller threats. And of course there’s Aradel’s Water Blast and the natural dice power, one of the most reliable Phoenixborn abilities and dice powers in the game respectively, which will help us cover all the in-between spaces. Speaking of dice powers, this deck is amazing at enabling them thanks to Shifting Mist. The overall strategy of the deck is to propagate an increasingly threatening battlefield full of conjurations while steadily whittling down your opponent’s units with all your removal options, then go for massive swings, often using Blue Jaguar to ignore the last couple blockers. For the sake of this re-con, we’re going to push our power symbols to the limit and overwhelm our opponents with some wild spell-slinging magic. 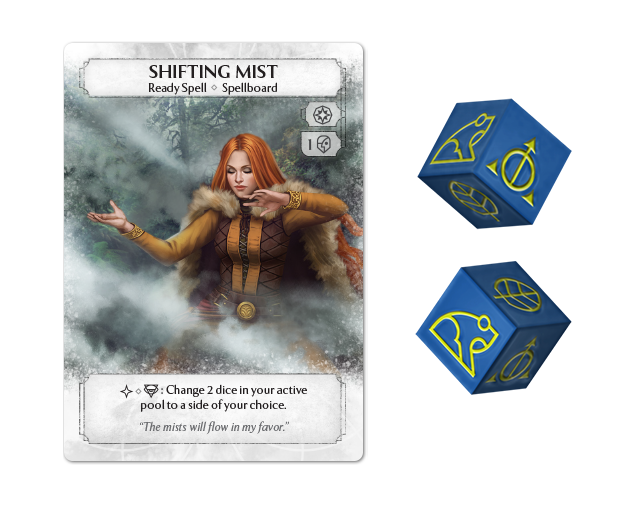 Let’s start with Shifting Mist, a card that provides two guaranteed power symbols per round, per copy on your Spellboard. That’s a lot of power symbols, so we’re building the re-con with that knowledge in mind. Butterfly Monk remains as our main unit guard while also covering for Aradel’s low life total, but we’re substituting Mist Spirits out in favor of Shadow Spirits, since they provide more overall value per die and restrict our opponent’s ability to react to our big swings. We’ll be combining this with high impact power spells like Shadow Strike, To Shadows, Out of the Mist, and Molten Gold, as well as a couple class-based removal options like Mist Typhoon and Ice Trap, all of which further advances our domination of the battlefield. Your opponent will never know what hit them. This deck doesn’t really need allies given our degree of conjuration (up to 6 per turn), but we’re still including a couple Rose Fire Dancers to help even out a few rounds here and there as another versatile way to lock down our opponent’s battlefield. Finally, while Root Armor is a cheap and effective defensive tool, I don’t feel any of our units are individually important enough to warrant running it (except maybe Rose Fire Dancer), so we’re opting for Particle Shield instead since that provides most of the protection we want while also drawing us more cards.

Books, books, books. This entire deck just wants to conjure up a storm, and your first five will definitely reflect that. We want jaguars, butterflies, shadows, and Shifting Mist to aid in the conjuring of said butterflies and shadows. That spread can deal with most problems pretty reasonably, so that last card should really just be whatever makes you comfortable. Mist Typhoon can make quick work of swarm style openings (usually the kind that involve Sleeping Widows), Rose Fire Dancer can be brutal against decks without easy access to removal or with a plethora of 0 attack units, and Steady Gaze can punish your opponent severely for developing a massive unit. There are also a few fringe cases where packing a Reflections in the Water can shut down your opponent’s opening strategy. I think Mist Typhoon is probably the overall safest choice if you’re not sure what to pick. 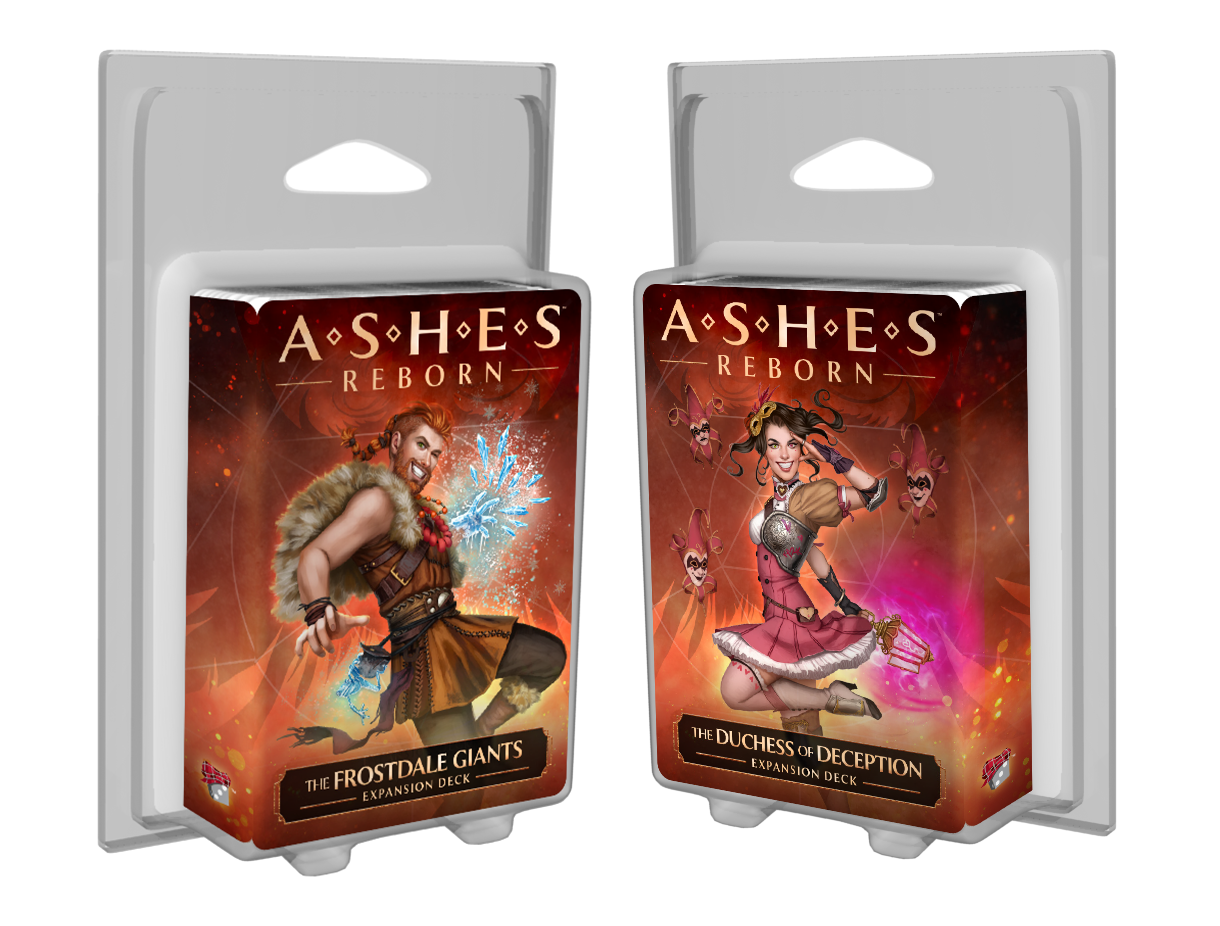 These expansions seem to come up a lot...

Ah, yes, this was intended. An unspoken condition I gave myself with the re-cons was to keep the number of overall expansions at a minimum across most all of them. If you’ve been keeping up with these articles in order, you’ll notice that The Duchess of Deception plays a large role in this deck, but is also used for Noah’s re-con (and, spoiler alert, we’re going to be using it in Saria as well). In general, the first 4 small expansions are a great starting point for growing out your core set without getting into the other dice types, and in the case of this deck I really consider Victoria’s cards to be a bit necessary.

However, Ice Trap is not quite as essential and you can definitely replace it with two more Molten Golds to further apply pressure on your opponent without needing The Frostdale Giants. Though, an argument could also be made for going harder into Frostdale by replacing Butterfly Monk with Frostback Bear and just disregarding unit guard. 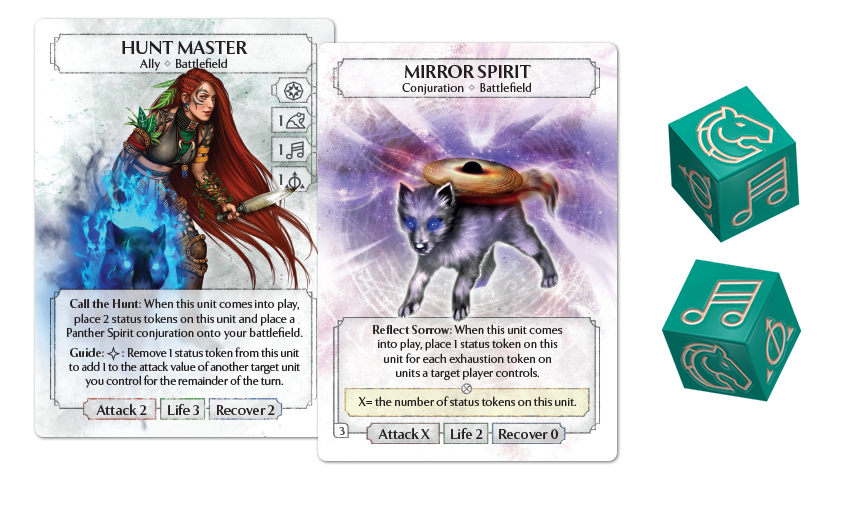 If you want to break even further out of this re-con, consider mixing in Sympathy to give your swarm playstyle some extra punch. Cards like Hunt Master and even Mirror Spirit can do wonders with your larger board state, and Shatter Pulse lets you remove larger threats with ease while also allowing greater dice manipulation (your deck is really low cost so you can afford this better than most). It should be noted that while I prefer Particle Shield here, Root Armor can be better especially if you decide you want to lean into Rose Fire Dancer as a more reliable unit. It may also be prudent to run a single Vanish when playing against a lot of direct damage, like Brennen. If you want to try something a little spicier, you can swap out your Butterfly Monks for Biters and run a full playset of Reflections in the Water. Biters are rather thick as guards go but lack an offensive option thanks to Rooted. However, you can place Reflections in the Water on them to pull out their roots for a round, suddenly expanding your offense.

Another surprisingly easy splash that offers really unique options is Time Magic (especially since both Reflections and To Shadows can splash time as well), but I don’t think we’re quite ready to talk about that stuff yet...

That’s all for this article. Next time, we’re staying stuck in the wet woods, but showcasing that blood is indeed thicker than water with Jessa.

Pre-Order the Master Set!
Ashes Reborn: Rise of the Phoenixborn
$49.95
2
14+
30-60 minutes
Choose from six Phoenixborn in this Ashes Reborn base set, using imaginative cards and custom dice to summon faithful allies, combine powerful spells, and outwit your opponents in a fast-paced back and forth barrage of well-crafted magic and strategic skill.
Unavailable