Hello, and welcome back to our preview series introducing our upcoming adventure game, Familiar Tales, an exciting narrative board game for 1-4 players, ages 8 and up. This is the third article in the series. You can view previous articles by going here!

In this article, we will be focusing on the familiars’ skill card decks and how the cards are used to perform skill tests.

In Familiar Tales, each familiar has their own skill deck made up of skill cards. When you begin the story, your familiars will each start with a deck of ten cards. Each starting deck has five generic skill cards and five that are unique to that familiar. Each card in a familiar’s starting deck will have that familiar’s portrait in the bottom right corner to easily identify them.

As you play the game, you will be playing from a hand of five skill cards. On your familiar’s turn, you will be using these cards to move your familiar around the board and take actions, often requiring a skill test.

Here’s an overview of one of Blaze’s starting skill cards: 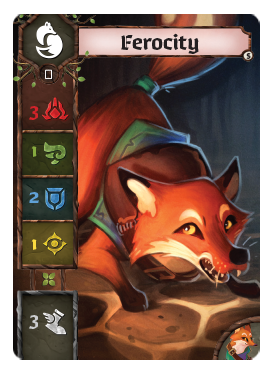 Your familiar’s stats are expressed through their skill cards. Along the left side of the card you will see four colorful symbols.

Might is used for strength and fighting skill tests

Agility is used for athletic and ranged attack skill tests

Resilience is used in defending and recovery skill tests

Insight is used for communication and foraging skill tests

Below the skills you’ll also see a foot icon with a number. Any of your skill cards can be played to move your familiar a number of move points equal to the move number on the card played. Again, some familiars are just faster than others, and will have higher speed numbers.

Each familiar’s skill cards have different values and reflect the things your familiar is good at or… not so good at. Blaze is a mighty hunter. Her skill cards tend to have higher might and move scores than the others. The color theme associated with each familiar reflects the color of the skill they tend to be best at.

Skill tests are how most actions in the game are resolved. Each skill test will have a skill type and a difficulty number you must equal or beat in order to succeed. To perform a skill test, play any number of cards available from your hand, and total up the skill values on those cards that match the skill type required. Then adjust this score by the roll of the chance die.

The chance die is used to reflect those moments of unpredictability. You might have a solid attack, but didn’t expect the enemy to duck at the last second. You might have come up short in a test to avoid a trap, but a beneficial roll pulls you through. You can overcome the luck by playing more or stronger cards, but of course that limits what you can do on your turn. To complete your skill test, roll the chance die and adjust the total score by the number rolled. If your total is equal to or higher than the difficulty number of the test, your familiar has passed the test. 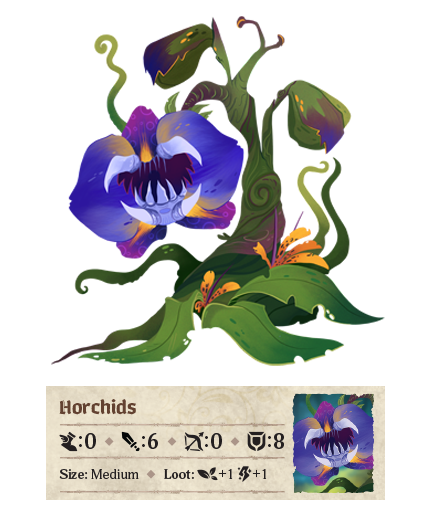 Here’s an example - Blaze has been captured by a carnivorous Horchid and is attempting to break the organic bindings holding her. This is a might skill test, with a difficulty of 5. She only has two cards left in her hand, a Might 3 and a Might 1. She plays both for a total of 4, then rolls the chance die getting a +2. Her total is now 6 and she succeeds in breaking out of her bindings, and now she’s free again. 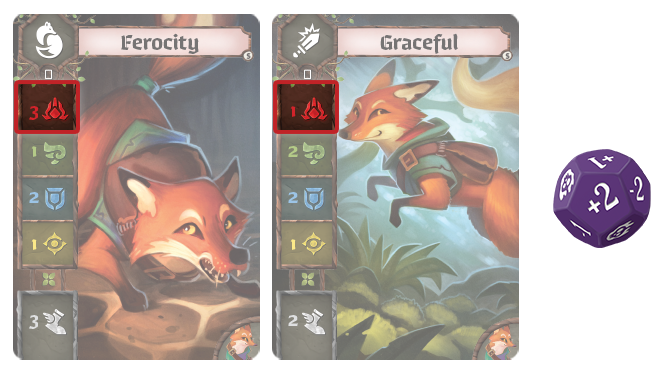 There are icons on the skill cards that can affect your skill tests in a variety of ways. Notice the symbols in the upper left corner. These icon effects are:

This increases the danger, hastening the arrival of the next enemy turn.

Draw an additional card. Play it into this test, or put it in your hand. Gain a fatigue.

Playing this card into your skill test allows you to re-roll the chance die once.

You can play this link card on another player’s turn to help them pass a skill test.

When performing a skill test, familiars can use items to help them succeed. Items can lend a bonus number to a specific type of test. An item might also have an ability that could be useful. If any of the skill cards played into a test have an icon that matches the icon effect in the ability field of the item used, that effect is activated.

Here Gribbert is using Aim and Sneaky skill cards and performing a ranged attack (agility skill test) using a Rustic Sling. Note that both the icons in the upper left of the skill cards match icon effects on the item. The precision icon on the Aim card adds a +1 agility bonus to the skill test. The stealth icon on the Sneaky card reduces danger by 1. Gribbert hits harder and more quietly with this attack.

Some skill cards have abilities. When a familiar uses this card for its ability, it is not counted for anything else, just the ability. Here, Chalk plays the Tweets card and sends its bird companion searching for needed supplies. 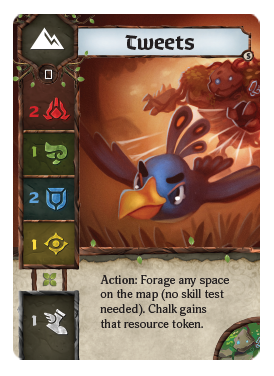 Sometimes familiars will gain fatigue in order to overcome a difficult challenge, or as the result of an effect or ability. The fatigue card goes into the familiar’s discard pile, and eventually will end up cycling into your hand. Fatigue cards have terrible stats and a skull effect icon. To get rid of the fatigue, it must be played, after which, it goes back to the fatigue deck. Beware — acquiring too much fatigue could leave your familiar vulnerable! 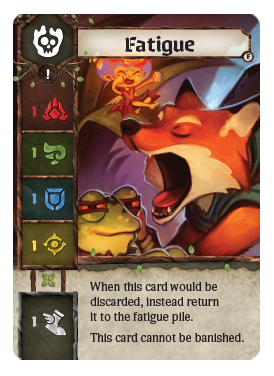 At the end of your turn, you will draw back up to 5 cards. This can give you link cards to help other players, and will ensure you have cards to defend yourself should you need to before your next turn. Be mindful though, because if you play too many cards, you won’t have anything in your hand when your familiar’s turn comes around again.

Familiar Tails is available to pre-order right now and will release January 2022!

Be sure to check out our new preview article next week about deckbuilding!

Jerry Hawthorne is the designer of Familiar Tales and other beloved board games such as Stuffed Fables and Mice & Mystics.