We have a special preview today to welcome in two new mercenary promos for Summoner Wars! Mercenaries are a class of unit that can be included in any summoner’s deck, as indicated by the ‘martial’ build icon. Will you recruit Blacksaber and risk betrayal? Or perhaps the original mercenary himself, Khan Queso? 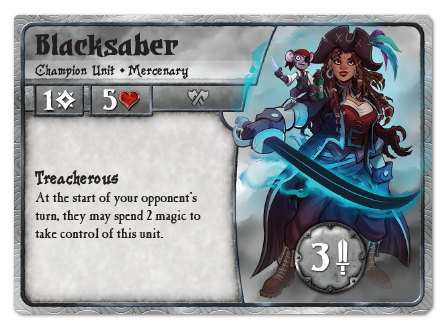 Blacksaber comes into play for a very affordable cost for the stats she has. However, money (or magic?) does the talking here, and control of her can switch at a moment’s notice if your opponent is willing to pay to recruit Blacksaber over to their side! Who will win over Blacksaber in the end? Are you willing to take the risk? 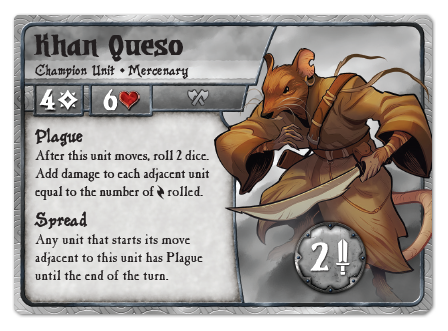 Khan Queso comes bearing the Plague ability, spreading danger across the battlefield as he advances. It is possible to even chain Plague across multiple units with clever positioning, causing all sorts of mayhem around the battlefield!

Which mercenary will you choose? Or why not try both? Whatever the case, look forward to receiving these promo mercenaries in the near future alongside the Tundra Orcs and Phoenix Elves Starter Set!

(Mercenary Promos are included in the first print-run copies only)

Voted Employee of the Month 200 Months in a Row