Welcome back Ashes players! Recently we announced the next two Phoenixborn to re-enter the fray, Lulu and Orrick. Today we will be looking at a few cards from Orrick’s expansion, the Messenger or Peace! 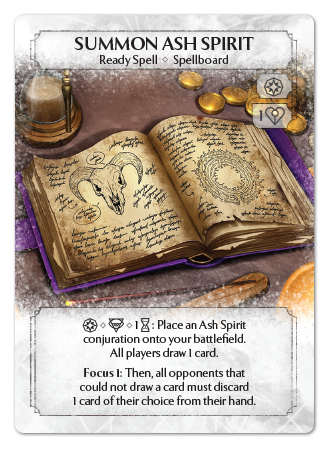 Focus 1: Then, all opponents that could not draw a card must discard 1 card of their choice from their hand. 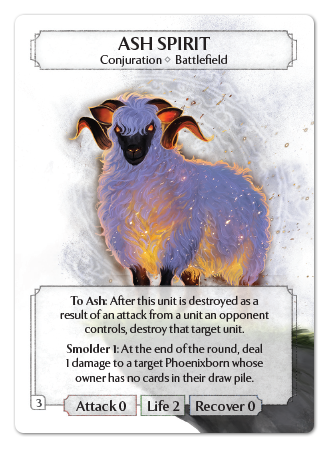 To Ash: After this unit is destroyed as a result of an attack from a unit an opponent controls, destroy that target unit.

Smolder 1: At the end of the round, deal 1 damage to a target Phoenixborn whose owner has no cards in their draw pile.

The Ash Spirit conjuration enters into Ashes to support control playstyles. It lacks any offensive presence itself, but it does punish any acts of aggression against it with the To Ash ability. While Ash Spirits represent Orrick’s desire to avoid conflict with his Phoenixborn siblings, the smoldering embers within represent the unceasing drive of the Phoenix to reunite. Ash Spirits can bring long games to a rapid conclusion by accelerating damage to the opponent’s Phoenixborn if they are out of cards in their draw pile! 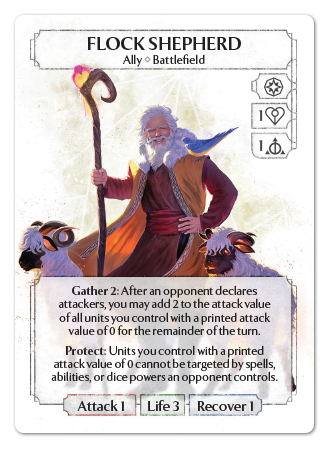 Gather 2: After an opponent declares attackers, you may add 2 to the attack value of all units you control with a printed attack value of 0 for the remainder of the turn.

Protect: Units you control with a printed attack value of 0 cannot be targeted by spells, abilities, or dice powers an opponent controls.

Flock Shepherds have a storied past as citizens of Gobi. Once the great Gobi Sunshield warriors, they have since retired their armor to take up the homesteading practices needed to reestablish their recently-nomadic community of New Gobi. These kindhearted allies provide protection for your most meek of units, while also rounding them up to fight back against any attacking foes. 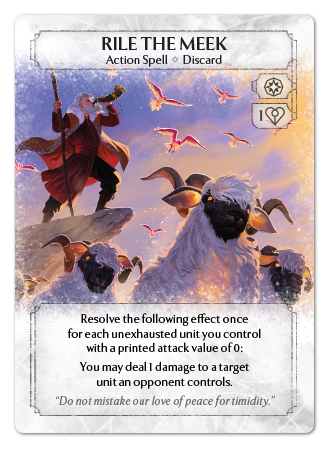 Resolve the effect listed below once for each unexhausted unit you control with a printed attack value of 0:

-You may deal 1 damage to a target unit an opponent controls.

Sometimes there is no choice but for Flock Shepherds to rally their flock of animals and conjured friends against your opponent. Rile the Meek provides a burst of damage equal to the size of your flock, with the special utility of being able to assign this damage to enemy units in whichever way you need!

Keep aggression in check with all these new tools to support your flock of magical critters, and stay tuned for more previews!