Ashes Reborn has been out in the wild for a bit now, and it has been so great to see the community growing and enjoying the game! With all the community buzz around, I’ve been really enjoying diving back into the current Ashes meta and community as a player; it has me feeling just as excited as I was during the early Slam Jam tournament meta of Ashes 1.0.

I’ve grown nostalgic already and wanted to go back to my favorite deck archetype known as Fear the Bear. This deck is all about fundamentals in Ashes, so I thought it’d be nice to go through the deck building process with this deck as an example. Deck building can be done in so many different ways, but here’s the story for this one. 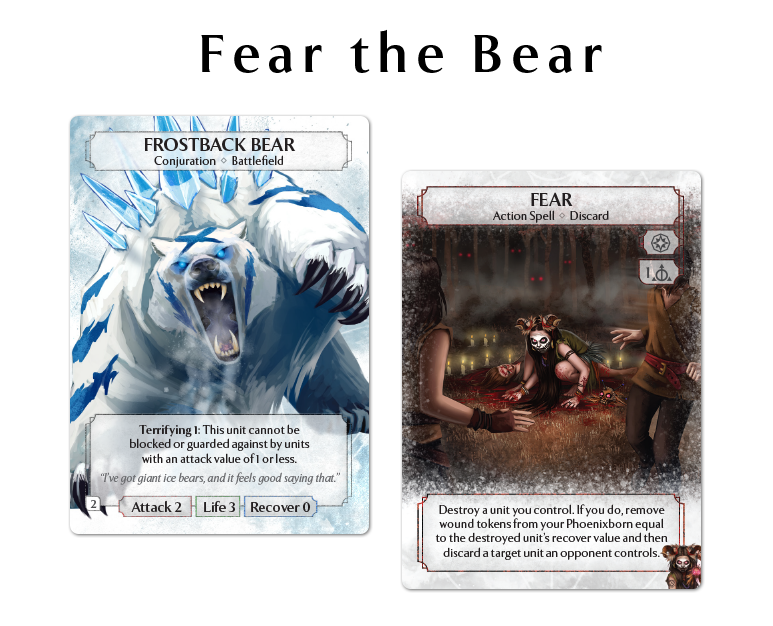 Fear the Bear gets its name from two of the most powerful Ashes cards that define its strategy. Fear is Jessa’s exclusive card, and while it isn’t quite as ridiculous as it was in 1.0, it still serves as a powerful tool for defining the deck’s fundamentals. Frostback Bear is the other titular card, and sets an immediate tone for the deck’s win condition. Being Jessa, we also get access to Screams of the Departed to capitalize on unit destruction throughout the game, dealing burn damage when attacks aren’t landing. With these cards in mind, we set the following goal for our deck:

Note that in the deck building process, it is common to start off with 3x of any given card, then trim down your deck to the final 30 cards. In this article, I put notes where I made these early cuts to streamline the process rather than detailing the full process. 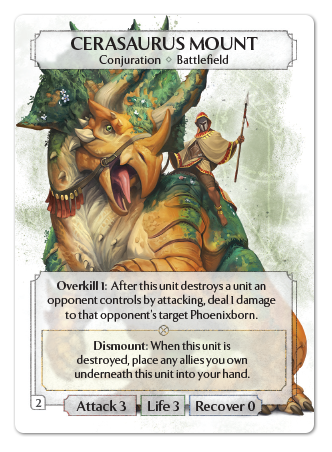 Now, we’ve committed to natural magic, so let’s look into other cards in that type to further our planned win condition. A natural unit that attacks for big damage or removes units itself is what we want, and Cerasaurus Mount fits right in. A Cerasaurus works on all fronts, dealing damage to a Phoenixborn almost every time it attacks thanks to Overkill 1. This is great news, as Cerasaurus is strong regardless of what the opponent’s battlefield looks like. If they don’t have units, great! If they do have units, also fine! Screams of the Departed can essentially boost the damage you deal with Overkill since a unit is being destroyed. This lets Jessa deal damage in big bursts, which can make or break the game if you are racing against an aggressive burn strategy.

At this point in the process, we have established our win condition and strategy, and have some clear choices for our First Five. Ashes is a fast-paced game, especially for aggressive decks like the one we are building here. Now would be a good time to lock in some First Fives by picking cards that compliment our core strategy, while fitting into our five-card hand limit and ten dice limit.

Summon Frostback Bear: 3 dice, two of which are natural magic.

One ally to mount with: 1 die of flexible type.

Every First Five we pick will have this three-card and seven-dice core. Let’s find some two-card and three-dice fillers that compliment our established core:

Knights are famously strong units in the three-dice slot. Grave Knight and Hammer Knight are the two we have access to with our selected dice types, and absolutely fit the deck’s strategy. However, we are looking to spend three dice across two cards, and there are very few cards in Ashes that don’t cost any dice. Luckily, our deck uses divine magic, so we can utilize one of the few free cards out there: Royal Charm. This spell can be a bit clunky to use, but having a flexible +1 attack to buff a Bear from 2 to 3, a Cerasaurus from 3 to 4, or a Grave Knight from 4 to 5 will let you make just the right trades you need to win the battlefield in round one. Just be sure to meditate for a divine power die early! 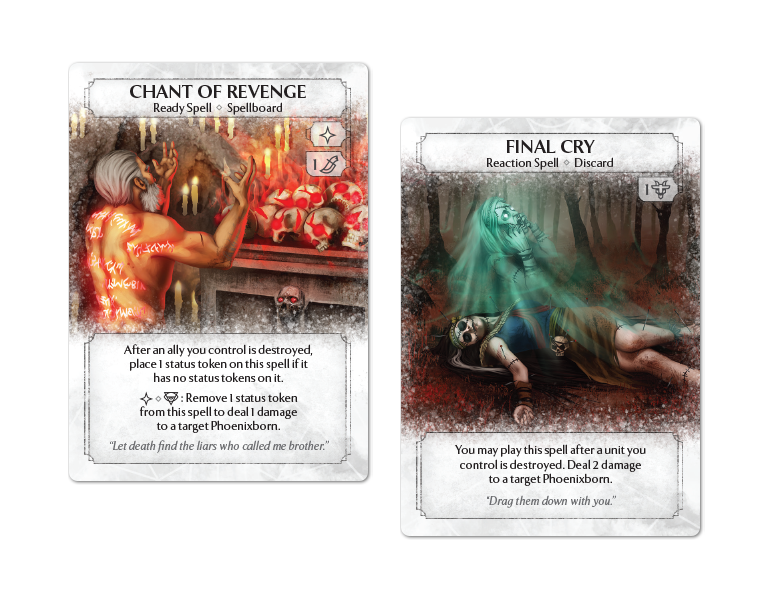 With our dice pool almost fully accounted for, we’ll need to think about our average spendings each round. Ready spells persist from round to round, and we’ve centered our strategy around the ready spells in our First Five; Bear and Cerasaurus. This will use a minimum of two natural magic and 1 divine magic each round, which doesn’t leave us with many of those dice types left for playing cards from our hand. Ceremonial magic costs aren't on our spellboard, so we’ll be spending those dice as basics and to play ceremonial cards from hand. With this in mind, I’d like to make our last two dice ceremonial magic, then stack the deck with a high amount of ceremonial cards.

With only nine card slots left, we have to make sure we use them to patch up our weaknesses. This is an aggressive deck that desperately wants to win the battlefield in round one. Round one is defined by your First Five, so let’s go over some alternative First Fives that we can use our remaining card slots to define.

We’ve already discussed the core three cards to every Fist Five (Bear, Cerasaurus, mount ally), but only explored the Knight + Royal Charm aggressive opener. What other First Five choices might we need to make if the one we already have might fail? One weakness of the Knight opener is that your ally might get destroyed before you mount it. Ice Trap can destroy it right away, and Three-Eyed Owl can threaten to steal a card completely. Both are bad news, so let’s find a countermeasure.

One innate countermeasure to Three-Eyed Owl’s nasty discard effect is simply the ceremonial dice power. If we can budget in one ceremonial die to recur an ally, we are safe to mount up against an expected Owl. However, some Phoenixborn are capable of summoning TWO Owls in round one, so an alternative support may be needed. Light Bringer is an excellent conjuration in color, which can be used to pressure Owls into attacking rather than Memory Draining, or at the very least buy you some breathing room to allow you to play out more of your opening hand. Speaking of good conjurations, it would be nice to add in Butterfly Monk to patch up our matchup against less battlefield-centric opponents. Butterflies offer us life value stabilization and the option to play a “four-book” strategy.

Ice Trap is a tricky one. We can’t prevent it from destroying our mount ally, so we need a plan to get a second ally mounted if Ice Trap comes down. Similar to Owl, the ceremonial dice power can be used to recur an ally, but our dice spread is tight. Mismanaging your dice on your basic costs can really mess up this option! Safest play is to select Anchornaut against a suspected Ice Trap so you have the peace of mind of only needing basic magic to play it twice. Also just bringing two allies can work! There are so many possible variations on the First Five among these card additions alone, so let’s dive into some of them now: 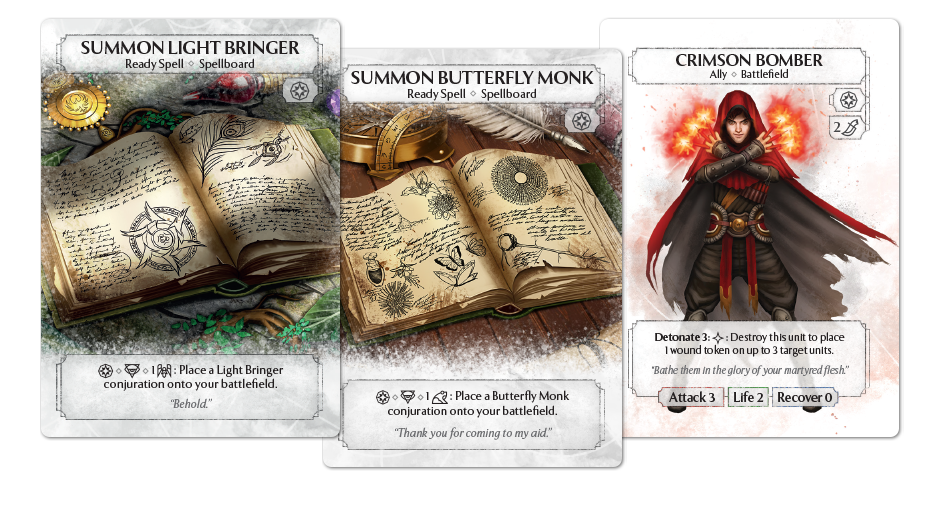 With so many 1-dice cards in the deck, the possible First Fives are many. At this point, eleven cards have already been discussed as possible First Five inclusions, and there are still more to choose from. These are more edge case choices and are often fine cards outside of round one, but could be very strong First Five counters if the pick is right!

And with that, over half the deck can be considered for the First Five! It can be overwhelming to remember all the nuances of these choices, but picking a standard one is a totally fine way to start learning a deck (I favor the Grave Knight opener). All that is left now is to fill out the last 10% of the deck with useful tools that fit the key strategy. 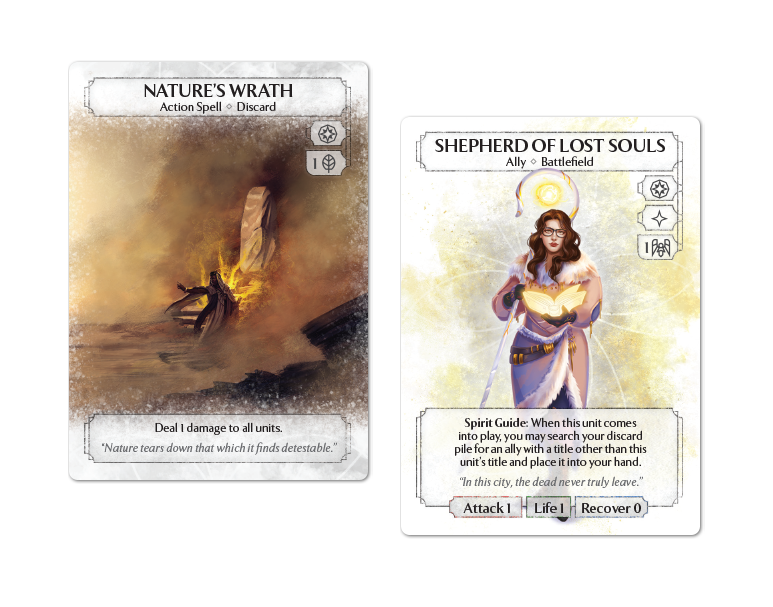 Every Ashes deck has to make some tough cuts and exclusions. Many of the choices for this deck were made with the key strategy in mind. That being the case, there are several effects that this deck lacks that are important to acknowledge:

Overall, Fear the Bear is an aggressive deck with a very clear gameplan. It has dynamic First Five options to make up for Jessa’s innate round one weaknesses, backed up by an incredible ability to close out games in which it wins the battlefield war immediately. It has a dice spread that is vulnerable to dice manipulation and card draw variance, but does so as a calculated risk. What do you think? Try out this deck list and find out!

I hope you have enjoyed this deck tech and that it has helped your deck building process to see an example walkthrough. If you are interested in writing up your own deck tech article for this website, just contact [email protected].

Get the Master Set!
Ashes Reborn: Rise of the Phoenixborn
$49.95
2
14+
30-60 minutes
Choose from six Phoenixborn in this Ashes Reborn base set, using imaginative cards and custom dice to summon faithful allies, combine powerful spells, and outwit your opponents in a fast-paced back and forth barrage of well-crafted magic and strategic skill.
Unavailable