Welcome back, Ashes players! This is the final preview article for The Breaker of Fate, so you’ll have the full picture of time magic’s debut by the end of it. Let’s take a look! 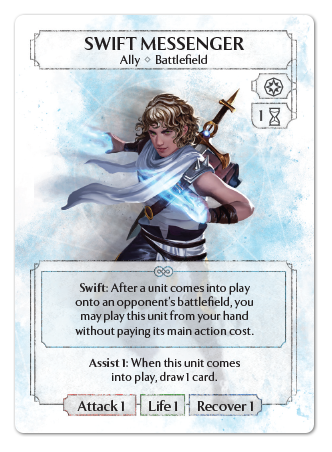 Swift Messenger- Ally
Play cost: Main, 1TC
1 attack, 1 life, 1 recover
[BLUE: Swift: After a unit comes into play onto an opponent's battlefield, you may play this unit from your hand without paying its main action cost.]

Assist 1: When this unit comes into play, draw 1 card.

Jericho has one last ally to support her, and it has quite the impact! Swift Messenger has a reaction ability that allows it to enter play after your opponent plays a unit of their own. This can be a great way to maintain tempo on the battlefield, and can do so in some particularly strong ways. The Swift Messenger is a great ally for Mounts, as entering play on your opponent’s turn can allow you to use a Mount spell and attack right away! Swift Messenger can also bring in a surprise extra unit against the controlling grip of Light Bringer, which forces you to make an attack on your next turn.

On top of this ally’s speedy entrance, you also get to draw 1 card with Assist. This is a perfect match for Jericho, who uses her Prepare ability to put any card of her choice on the top of her draw pile. Swift Messenger is ready to quickly add that exact card to your hand! 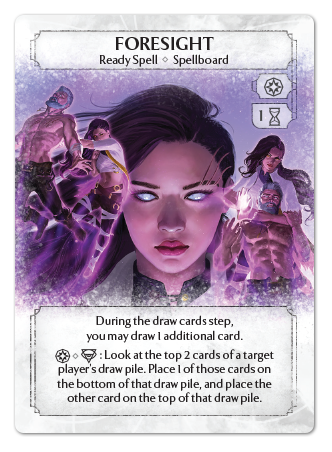 During the draw cards step, you may draw 1 additional card.

This ready spell gives some additional utility to a Phoenixborn in need of more card management. For starters, Foresight increases the amount of cards you draw each round, which can be great for focusing your ready spells or simply finding the right tools for the job. You can also activate Foresight to manipulate a player’s deck to plan for the future in whatever way you see fit. It may not do much for combat, but knowledge is power! 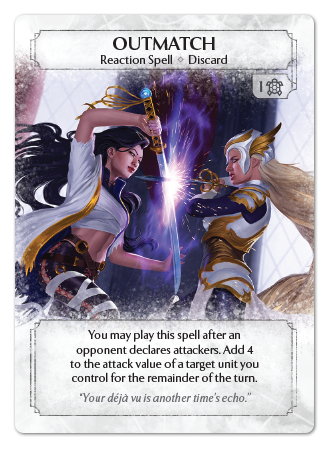 Outmatch- Reaction spell
1TP
You may play this spell after an opponent declares attackers. Add 4 to the attack value of a target unit you control for the remainder of the turn.

The final card from Jericho’s arsenal is the reaction spell, Outmatch. This spell further supports time magic’s strength of combat manipulation. Unlike Flash Strike, Outmatch is used only on defense, and can give a large attack boost support to any defending unit! 4 extra damage is enough to take down the even mightiest of attackers, so aggro players be warned when a time power die is showing in your opponent’s active dice pool, as you might just get Outmatched in battle!

The stage is set for Jericho to return to the War of Ashes once again. How will you use time magic to your advantage? Determine the destiny of Jericho and all Phoenixborn when The Breaker of Fate releases!

Don’t forget to Subscribe to Team Covenant’s Ashes Reborn PDP to be one of the first to receive the Breaker of Fate!