Welcome back Ashes players! Today, we have previews for several spells in Jericho’s arsenal. Be sure to check out our previous preview articles to stay up to speed on time magic’s debut. Let’s get to it! 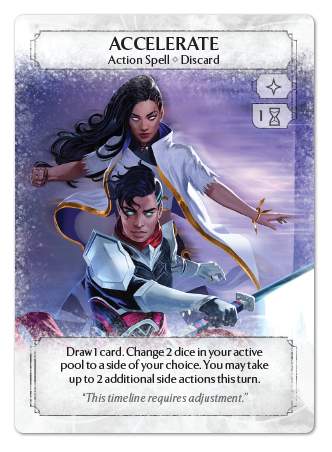 Accelerate- Action spell
Play Cost: Side, 1TC
Draw 1 card. Change 2 dice in your active pool to a side of your choice. You may take up to 2 additional side actions this turn.

Time magic wouldn’t be time magic without a way to gain additional actions! Accelerate does one better by throwing in an additional card draw and some dice fixing to support your new free time. The applications of Accelerate are incredibly wide! Drawing a card allows you to take advantage of Jericho’s Prepare ability, getting access to any card of your choice. Fixing dice can allow you to use a dice power (or two) of your choice, without needing to meditate the turn prior. Multiple side actions can allow you to summon a full army of Time Hoppers in preparation for a super wide attack! You could even use one of those side actions to bypass an enemy blocker with Jericho’s Blink or Stasis! 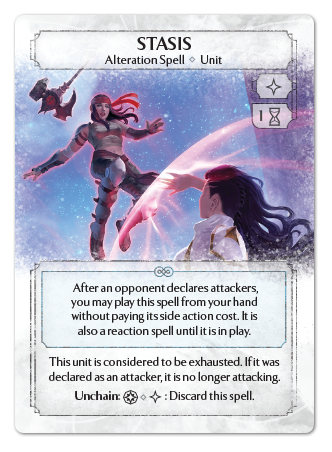 [BLUE: After an opponent declares attackers, you may play this spell from your hand without paying its side action cost. It is also a reaction spell until it is in play.]

This unit is considered to be exhausted. If it was declared as an attacker, it is no longer attacking.

Unchain: Main, Side: Discard this spell.

Stasis continues to emphasize the strength and flexibility of action manipulation in time magic. Stasis cuts two ways. You can use it as your side action before attacking to temporarily eliminate a defending unit, or you can use it to disrupt an opponent’s attack at reaction speed! Either way, your opponent is going to have to spend an entire turn to restabilize from this spell, which can give you all the time you need to push ahead while they are down. 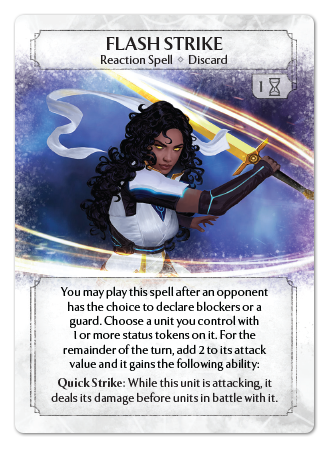 You may play this spell after an opponent has the choice to declare blockers or a guard. Choose a unit you control with 1 or more status tokens on it. For the remainder of the turn, add 2 to its attack value and it gains the following ability:

Quick Strike: While this unit is attacking, it deals its damage before units in battle with it.

Our last preview for today is Flash Strike. This reaction spell is all about converting your units with status tokens on them into the perfect offense! The window to play Flash Strike is of particular importance, since you as the attacker can decide exactly which unit you want to buff after your opponent has committed to defending. Would you like an attack buff and Quick Strike to turn a simple Hopper into a Knight-slayer, or would you rather sneak that extra damage onto the enemy Phoenixborn? You decide! By simply existing, Flash Strike will keep your foes on edge any time you send in a statused unit into combat.

That’s all for this week! Time magic is sure to influence the tide of battle with its surplus of action and battle manipulation. Next week, we wrap up the previews for The Breaker of Fate! See you there!