The Turtle and The Hare

Welcome back Ashes players! This week, let’s dive into the conjurations Jericho can summon to the battlefield. This is the first wave of conjurations for time magic, so it was important for them to really set the tone for our newest magic type. If you missed Jericho Preview #1, go over the story of how Jericho was chosen to be the first time magic Phoenixborn. As if that story wasn’t serendipitous enough, Jericho’s original deck had the Lucky Rabbit and the Turtle Guard as her conjurations. With the time dice power featuring a turtle symbol, and the classic juxtaposition of the slow tortoise vs the fast hare in play, it only made sense to reimagine these two classic Jericho conjurations for time magic! 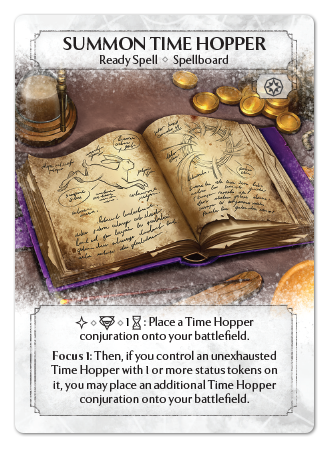 Activate cost: Side, Exhaust, 1TC: Place a Time Hopper conjuration onto your battlefield.

Focus 1: Then, if you control an unexhausted Time Hopper with 1 or more status tokens on it, you may place an additional Time Hopper conjuration onto your battlefield. 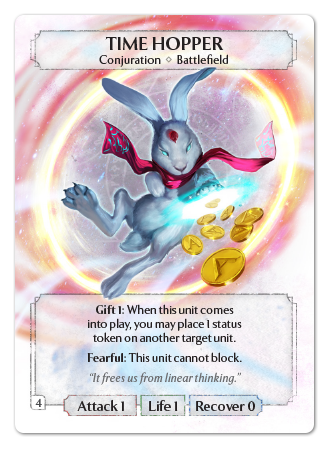 Gift 1: When this unit comes into play, you may place 1 status token on another target unit.

The Time Hopper is all about highlighting speed as a core strength of time magic. There are very few units in the game that can be summoned with a side action, and this feature allows the Time Hopper to be summoned and to attack in a single turn! To make up for its speed, the hopper is Fearful, preventing it from being used defensively.

Time Hoppers also have the Gift ability, supporting the increased relevancy of status tokens that time magic will have. Once your Time Hopper books are focused, hoppers can use their Gift ability to summon even more Time Hoppers! Be sure to come prepared with a large battlefield to manage all these small conjurations. They make a great companion to the Standard Bearer that was previewed last week, as they can stack up more status tokens on her, then immediately attack alongsider her with increased power! All in all, the Time Hopper really captures the core essence of what I want time magic to offer, in terms of speed and status token support. 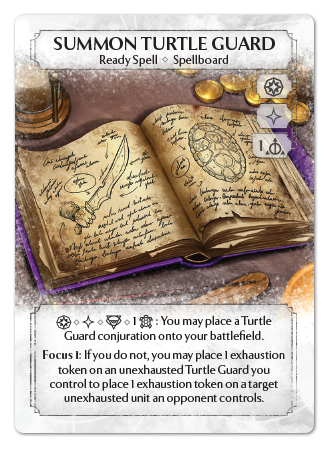 Activate cost: Main, Side, Exhaust, 1TP: You may place a Turtle Guard conjuration onto your battlefield. 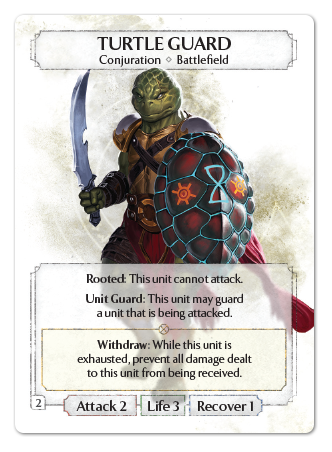 Unit Guard: This unit may guard a unit that is being attacked.

[INEX: Withdraw: While this unit is exhausted, prevent all damage dealt to this unit from being received.]

Compared to the Time Hopper, the Turtle Guard is on the complete opposite end of time magic’s strengths. Summon Turtle Guard boasts some other very unique costs. Both playing and activating this book costs a main + side action, emphasizing time magic’s use of actions as a cost. Since these action-intensive costs can be slow and clunky to afford, the dice cost is very cheap for the defensive tank that is the Turtle Guard! Boasting a solid 2/3/1 statline and a full suite of defensive abilities, the Turtle Guard enters the fray as a premier defensive unit. While Time Hoppers are unable to block, Turtle Guards are unable to attack, making them a great pair for meeting your needs on the battlefield.

The Turtle Guard’s influence isn’t relegated to just combat however. The focus 1 effect can allow your Turtle Guard to grapple an enemy unit and control them via exhaustion, completely outside of combat! This trade works in your favor, as the Withdraw ability will keep your Turtle Guard safe from damage while it rests in its shell for next round.

Thanks for checking out today’s preview! Next week, we’ll dive into Jericho’s action-manipulating spell cards!