Welcome back, Ashes players! Today we continue previewing the cards from The Breaker of Fate! Here are some notes on the design process of making the all-new time magic!

Designing a new class of magic from the ground up was an exciting experience for the first expansion for Ashes Reborn. We had just revised a large section of the Ashes card compendium, and were now tasked with carving out completely new space for time magic to settle into. I wanted to honor the design vision of time magic as best as I could from my memory of discussing time magic with the development team during Ashes 1.0, but also wanted to ensure we would create a time magic that made sense for Ashes Reborn. The process began with the dice power.

Dice powers are a unique element of Ashes design, as they are a built-in function of the resource system and independent of card text. Since players have access to these effects regardless of the cards they are using, it is really important to find the balance between useful, simple, and moderate power level. The original vision for the time dice power was never firmly set, but the intent was for it to interact with status tokens, one of the lesser used elements in Ashes. I decided to move forward with this goal in mind, and began Jericho playtesting with this dice power:

Place or remove 1 status token from a target card.

This was the most general application of status token interactions, and posed a lot of implications for the design of time cards. Ashes Reborn introduces more ready spells that collect status tokens on them to use their effects, so having a dice power manipulate that economy seemed intriguing. In addition, this dice power would open up the ability to put status tokens on Phoenixborn, which could have its own depth of design. Units are the primary place for status tokens to appear, so nothing new there.

Now, this was the dice power used through all of Jericho testing, and playtesters had mixed opinions on the dice power, mostly stating it to be too niche. There were a handful of situations where this dice power was very strong, however, giving us a pretty polarizing effect. 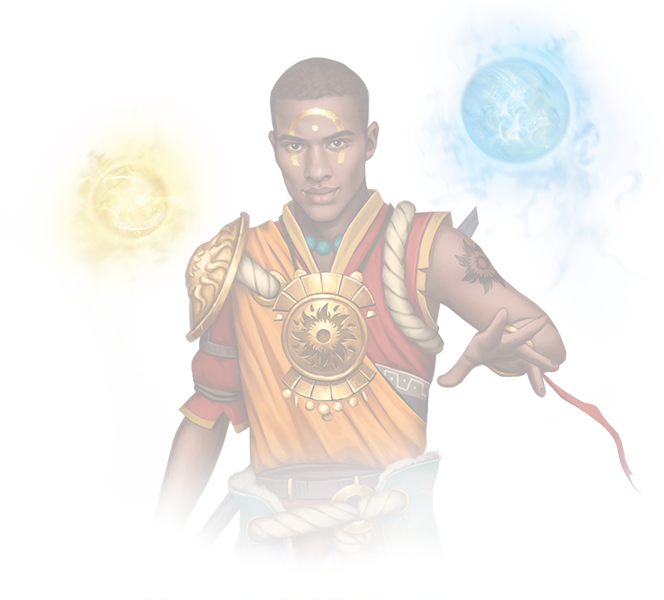 Some card ideas came and went that referenced status tokens on your Phoenixborn, but none of those designs were coming through successfully. This was one of the first warning signs that our time dice power wasn’t quite right. It wasn’t until deep into testing Orrick (the upcoming time/charm Phoenixborn) that we decided that Phoenixborn status token effects had to be self-contained. Orrick can use his signature card to build up and cash in status tokens on himself, free from the influence of players’ time dice powers.

Another side effect of this dice power was the ‘cheating out’ of charge up ready spells, particularly Guilt Link. By allowing the dice power to charge up these spells, we were signing up to limit the power level of these spells, since a single time dice power could unlock them. Guilt Link has quite a high power level, and being able to proactively charge it up and cash it in was both too strong and defeating the theme and gameplay of Guilt Link. This was sure to be a future design restriction too, so the dice power was due for a change. With Phoenixborn status token interactions and charging up of ready spells off the table, the following dice power was put into effect: 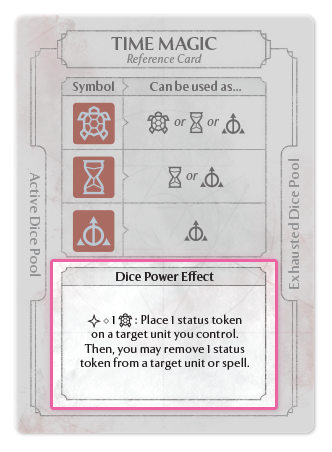 This dice power has removed the most problematic interactions, while still maintaining the ability to boost your own units AND unwind tokens from your opponents units and spells. I’ve been quite pleased with this dice power, and I hope you enjoy using it with the rest of time magic as well! As for what units Jericho fields that might benefit from this dice power, check out the Standard Bearer: 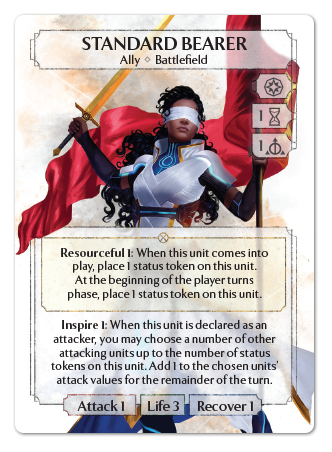 This ally sets the stage for Jericho’s main battle strategy; build a wide board of units over time, Blink the opponent’s units out of the way, and attack with an inspired army! The more tokens you can build up on the Standard Bearer, the larger the army she can lead into combat with increased attack!

Thanks for reading this week’s preview, and stay tuned for more design updates and card previews next week. Take care!