This preview, we continue to explore custom decks made from the Ashes Reborn: Rise of the Phoenixborn set! Our guest writer, Lizzie Hart, is here to highlight a custom Aradel deck using the fearsome Iron Rhino! Take a look and try out this deck when you receive your Ashes Reborn cards, if you are in need of deck building guidance or inspiration! 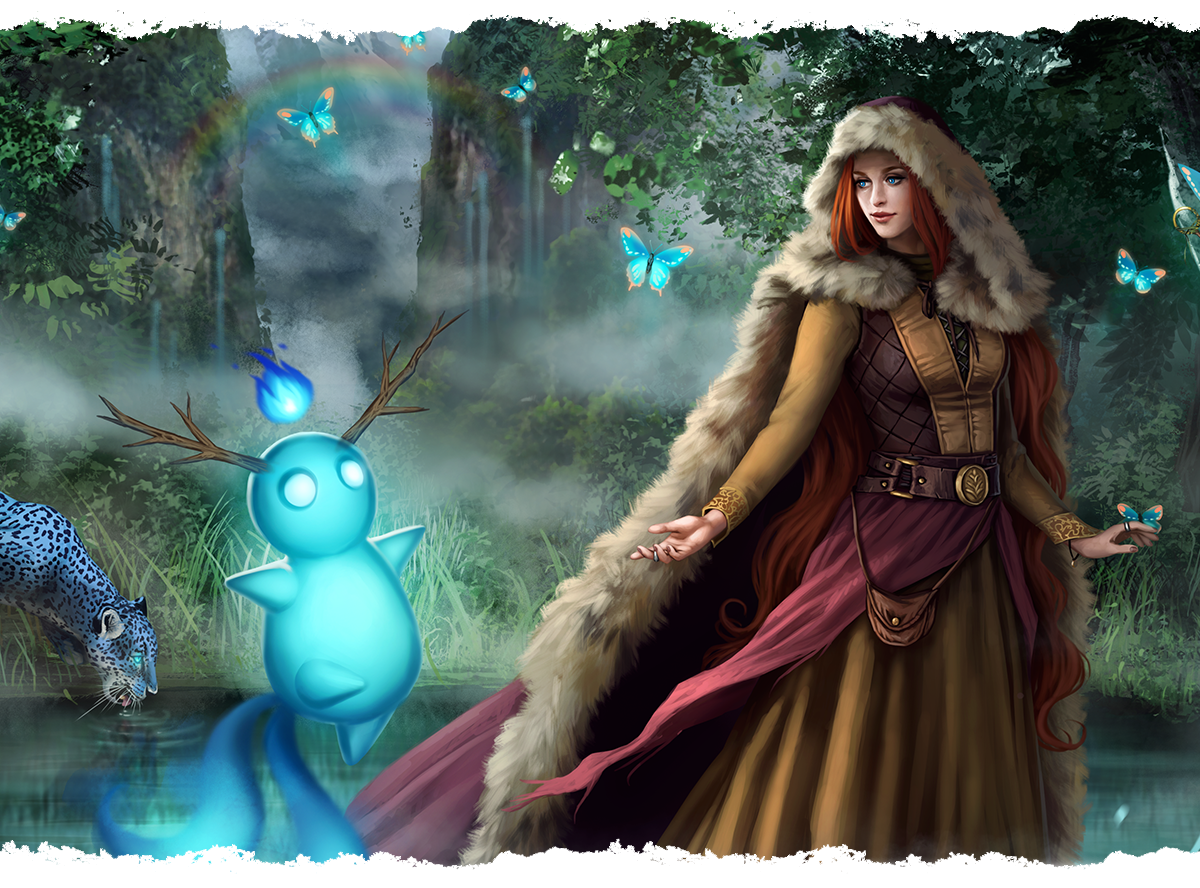 3x Out of the Mist

There are two ways to play this deck: aggressive or conservative. I’ll describe both and let you choose which one sounds more like your style. Personally, I recommend trying aggressive at least once, as it can be a boatload of fun.

The First Five remains the same regardless of how you choose to play: Resummon, Summon Iron Rhino, Summon Blue Jaguar, Summon Butterfly Monk, and Hammer Knight. Now you might be looking at this and saying, that thunder number (the number of dice a First Five costs) is more than 10! If you were to play every card, summon every conjuration, and use Aradel’s ability it would cost you 16 dice! The trick is you don’t play everything in the first round. Remember, your First Five sets up your board for the rest of the game, not just round one.

Before I get into the two ways I like to play this deck, let me first go into a bit of detail on the function each card serves. Out of the Mist and Steady Gaze are for taking out or locking down big threats, like Silver Snake or Hammer Knight. Mist Typhoon and Aradel’s ability, Water Blast, are great at clearing boards so you can swing in for big damage. Iron Worker is a solid attacker and Hammer Knight can be both a great blocker because of its Alert ability or a great attacker and clearer with its Aftershock. Final Cry helps get damage through if your opponent’s board gets full of blockers. And Summon Sleeping Widows is always a nice surprise (*chef’s kiss*). 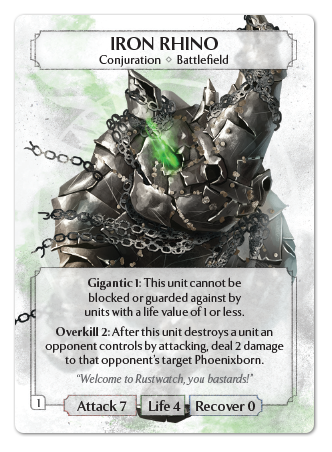 Iron Rhino is the big star of this deck. It can be used early to try and hit for 7 damage in round one, and as you draw into the other Summon Iron Rhinos it becomes cheaper to bring them in, so they are also a great late game threat. Their Overkill ability lets them punch through damage even if you can’t get around all blockers, and their Gigantic ability means your opponent can’t block with one-lifers. Resummon is how you really get Iron Rhino to shine. It lets you hit with a Rhino twice in one round! Root Armor and Butterfly Monks are great at protecting your Blue Jaguars and Hammer Knights from threats and/or ping. Butterfly Monks have the added benefit of healing. And last but not least, the Blue Jaguar uses Gaze to great effect by allowing your Hammer Knight or Rhino to bypass a blocker. 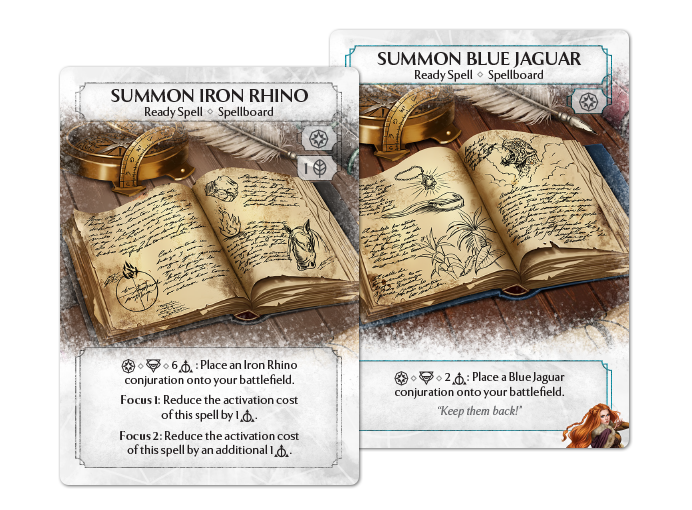 Aggressive first round: Summon an Iron Rhino and a Blue Jaguar, use Water Blast to clear a blocker, and attack with the Jaguar and Rhino. Put down the other two ready spells for use in round two and hold onto the Hammer Knight to bring them in round two as well. If you want to go really aggressive you can use Resummon and try to hit with your Iron Rhino twice. You probably won’t hit face both times, but it does have Overkill. A downside of using an aggressive opening is that if your opponent plays Strange Copy or Fade Away on your Rhino, you can end up way behind on dice and board.

Conservative first round: If you put down all your books, use Water Blast, summon a Blue Jaguar and a Butterfly Monk, as well as play a Hammer Knight and use Resummon to give the Blue Jaguar two attacks that round. The thunder number is only 9! Rhino can end up being a good late game closer as you focus the book and it costs less to summon, or you can summon it earlier and make good use of its Overkill by combining it with Resummon!

I hope you enjoy!

Look out for a follow-up article by guest writer Brian Broughman, where he’ll show us a custom Saria deck to take on Lizzie’s Rhino-Aradel deck! It’s a close match up, so stay tuned! 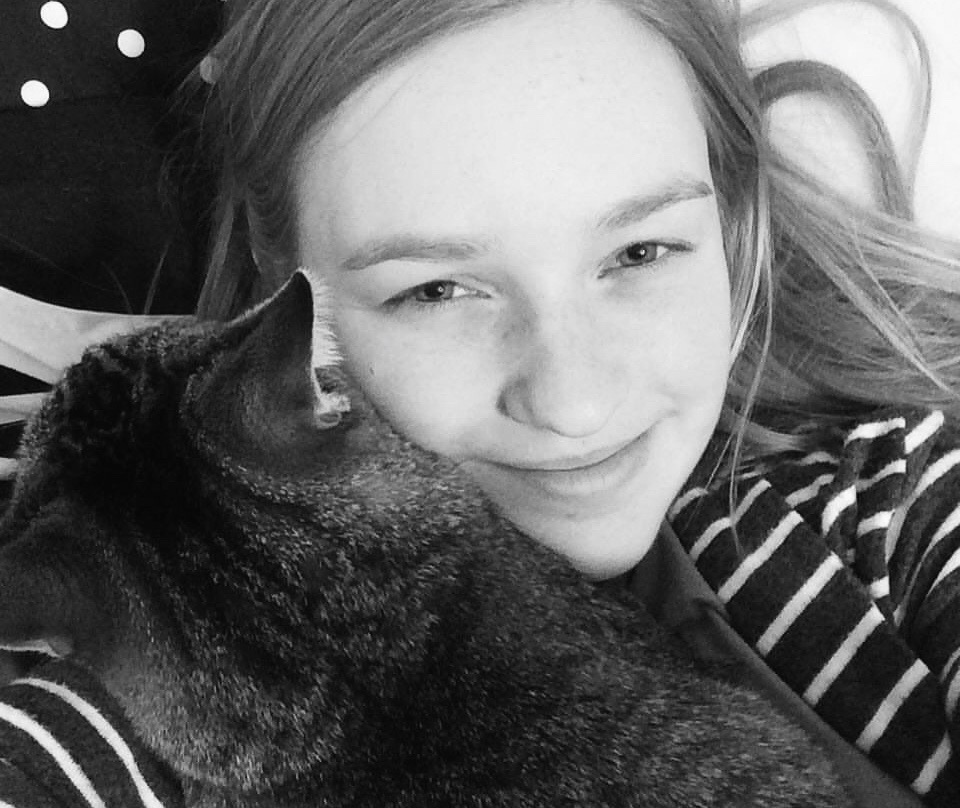