We are drawing ever closer to the official release of Ashes Reborn! With only a few more weeks of previews to go, I hope you are enjoying seeing the full vision of the game come to light. If you haven’t seen it yet, the Ashes Reborn Rulebook and Primer Sheet are available now! In this article we have previews from The Boy Among Wolves and Goddess of Ishra expansion decks. Let’s get to it!

The Boy Among Wolves 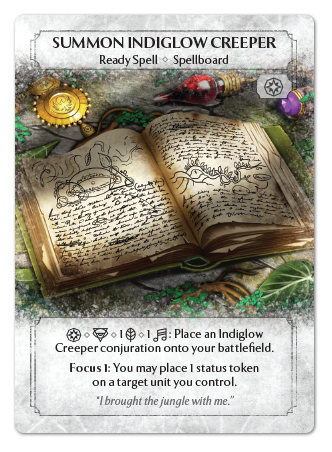 Koji’s expansion deck has some of the fewest changes in it. Neither Koji or his exclusive card has changed for Reborn, however his most iconic card has. Summon Indiglow Creeper simply lost its Focus 2 effect that summoned an extra Luminous Seedling. Playtesting had found the Creeper chain to be a strong and efficient battlefield option even without this accelerating focus effect. This was a big indicator of the rebalancing of Reborn in action. Creeper decks were on the fringe of playability in original Ashes, but are now a top threat despite receiving a power level decrease! 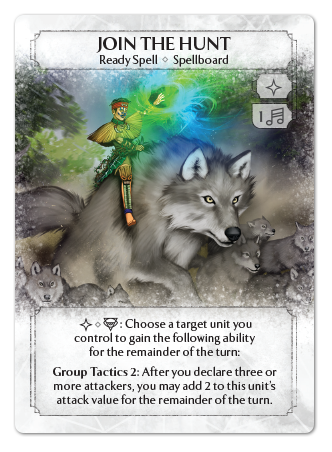 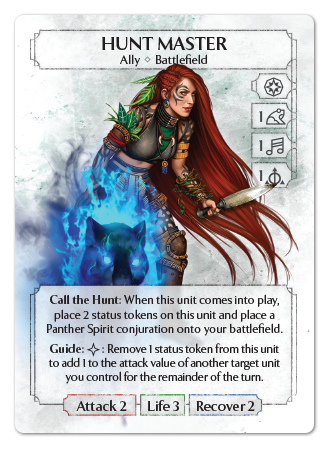 Join the Hunt receives a change to simplify its timing and to reinforce sympathy as a class of magic that excels in swarm attacks. Join the Hunt is an efficient way to add some extra punch to your most aggressive attack actions.

Hunt Master is a high cost ally that offsets some of its own stats into those of its companions. She now summons a Panther Spirit upon entering play and can transform status tokens into raw attack power! Hunt Master is a unit worth protecting to ensure you get maximum value out of her Guide ability. 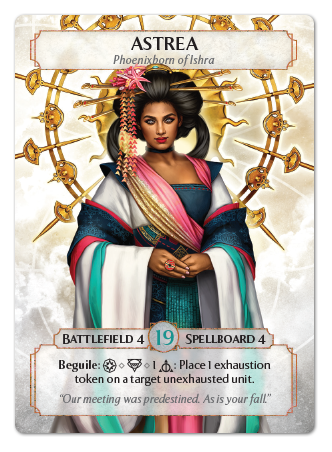 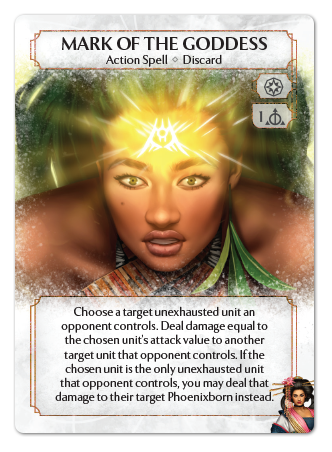 Astrea was one of the most fearsome control Phoenixborn in original Ashes, and aims to carry forth this role with her updated Beguile ability. Astrea has the cheapest and most consistent access to unit exhaustion in the game, so enemies should steer clear of dropping down large units against a readied Astrea. To further Astrea’s plans, Mark of the Goddess has gotten a massive overhaul. Astrea’s stealing and sacrificing enemy units was one of the most negative play experiences of original Ashes, marking a nearly insurmountable swing in resources. Now Astrea gains the potential to capitalize on specific board states, forcing unexhausted units to deal damage to another unit, or worse, Phoenixborn! 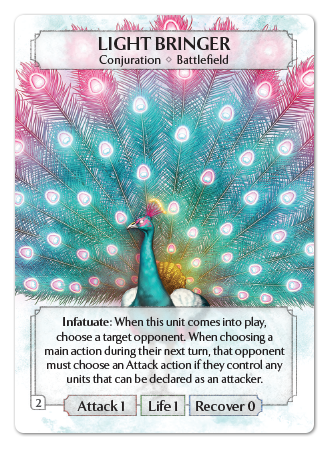 Moving on to Astrea’s updated conjurations, we have Light Bringer and Steadfast Guardian. The Light Bringer takes on a new role as a staple divine conjuration with the ability to disrupt opponent’s battlefield plans. Light Bringers can force players to declare an attack at an inopportune time which can cause all sorts of issues for their strategy. 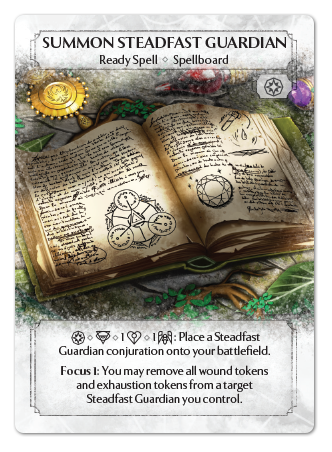 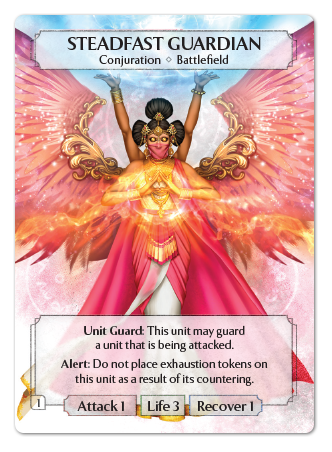 The Steadfast Guardian has been reimagined as a dual-class defensive wall. It is limited to only one conjuration, but you can expect to get good value from it against aggressive swarm strategies. The combination of Unit Guard and Alert rewards patient players who can withstand multiple waves of attacks. In addition, this conjuration’s book has been simplified and given a focus ability to mitigate its restriction of one copy. 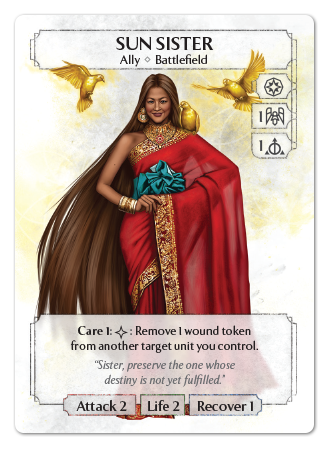 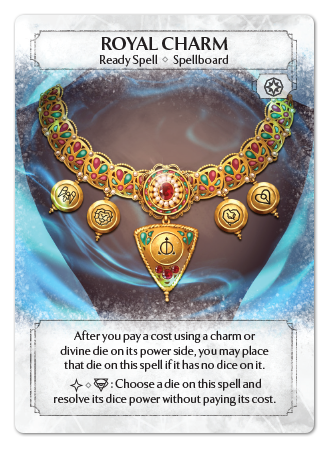 Sun Sister is another ally exploring repeatable side action abilities. The Sun Sister’s Care ability is a simple way to offer protection and healing from opponents relying on getting ping damage on units across multiple turns. Just the presence of a Sun Sister can shut down certain tactics due to the free cost of her ability!

Royal Charm is another personal favorite card of mine. It uniquely takes the innate qualities of charm and divine magic and combines them through their mirrored dice power abilities. This ready spell can convert power dice paid for costs into their respective dice powers! Whether it is buffing your own units or weakening an opponent’s, Royal Charm is here to help tip the scales in your favor.

That’s all for this week’s previews! Ashes Reborn is getting closer each week, and we only have a handful more expansion decks to preview before that. See you all next week for previews of Harold and Sembali’s decks! And don't forget to tune into Team Covenant's stream to get a sneak peek at some even more Ashes Reborn cards!