A Look Into the Reborn Development

Some Changes You Can Expect

Plaid Hat Games recently announced the resurrection of Ashes through the upcoming Ashes Reborn Upgrade Kit and its 1.5 ruleset! I’d like to take a little time to share some information about the return of Ashes so you can know what to expect from the game system moving forward. Please note that the new rules and card changes are still in development to make the game the best it can be, so information here may be subject to change before the release of Ashes Reborn.

Core Philosophy: To make Ashes a game accessible to as many different players and communities as possible through:

Ashes has been praised in the past for its gorgeous visuals, representation, and gameplay, and I am so glad that the Reborn project will carry this forward. Some barriers Ashes originally had lay in some of the rules, mechanics, and language, all of which are being addressed in Ashes Reborn. Let us jump right in to some of these changes!

In original Ashes, a large number of cards utilized effects called triggered abilities. These are effects that can be resolved instantaneously when a certain condition is met. Let’s examine the original Chant of Revenge as an example: 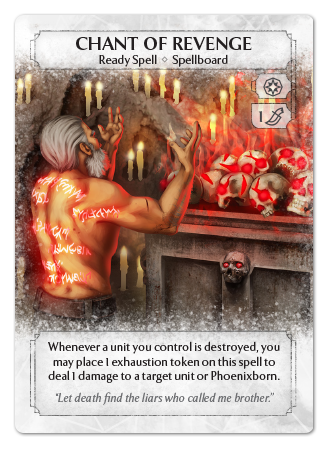 For such a simple and innocuous effect, having access to several triggered abilities like this can cause a massive domino effect of confusing webs of effect resolution. Even some of the most advanced Ashes players could regularly find themselves stuck in a web of resolution, and ill equipped to resolve them accurately and intuitively. A goal of Ashes Reborn is to reduce these situations in several ways:

Chant of Revenge, and several cards like it, will be receiving a revision to allow for more simpler use of these triggered abilities: 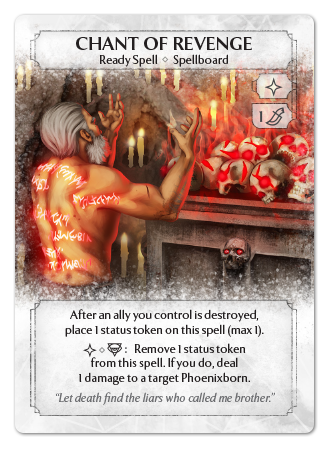 By utilizing status tokens to ‘charge up’ ready spells, players no longer need to pause gameplay whenever a trigger is met and walk down a path of possibly several other triggered effects!

Ashes 1.0 has a surprisingly low number of effects that trigger on entering and leaving play. These types of effects offer up much clearer windows of effect resolution due to how much more solidified their triggered windows are within the structure of Ashes gameplay. You can expect to see many units with triggered abilities pivot over to these types of effects!

Another category of effects you can expect to see are cards that change the rules of the game while they are in play. They do not trigger or activate off of any condition. An example of this can be seen in the Reborn version of Frostback Bear 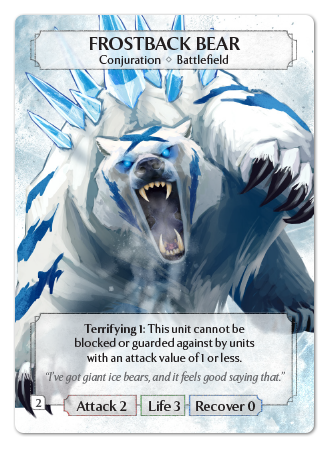 This conjuration has been revised to have a simple ‘evasion’ ability that modifies what units are allowed to defend against it while attacking. Terrifying is just another example of ways to promote interactivity and depth on the table, but by avoiding the complexity of having several triggered abilities online. 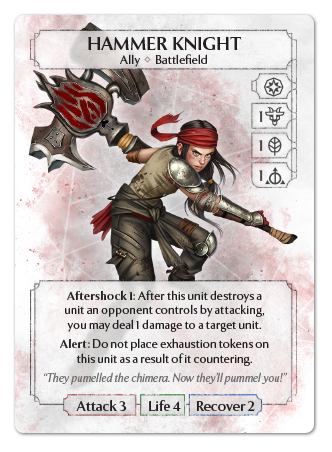 Another barrier to experiencing Ashes as intended was the wide range of language used to articulate the timing and resolution of card effects. This is related to both card resolution, as well as the damage resolution process. Both of these mechanics are receiving major adjustments, as well as proper language on cards to promote intuitive resolution of them. Here are some snapshots of the current working definitions of these rules:

When resolving a card effect, resolve as much of the effect as possible. Some cards have multiple effects, often separated by sentences or words like ‘and’ or ‘to’. Each effect is resolved one at a time, in order on the card. If one effect on a card triggers another reaction or ability, pause resolving the current card until all related triggered abilities and reactions have been resolved from the initial effect. This means that resolving a single card can be interrupted by other effects.

This is a major change in the way cards in Ashes are resolved. This new resolution model will allow players to work their way from top to bottom of card text, one step at a time. No longer will players have to choose targets or make decisions for future events at the onset of casting a spell!

Whenever damage is dealt, follow the steps of below:

Damage resolution always seemed more complex than needed in Ashes. This new process clearly denotes what triggered effects can activate at any given step of the process. The intent is to never have players overloaded with options in a given window and for them to know exactly how and when to resolve their effects! Another big boost to clarity lies in the order of units leaving play when destroyed, and subsequent destruction effects. Effects that summon new units after a unit is destroyed will leave the battlefield before those effects trigger, ensuring that there will be battlefield space for your new Sleeping Widows and Salamander Monk Spirits! 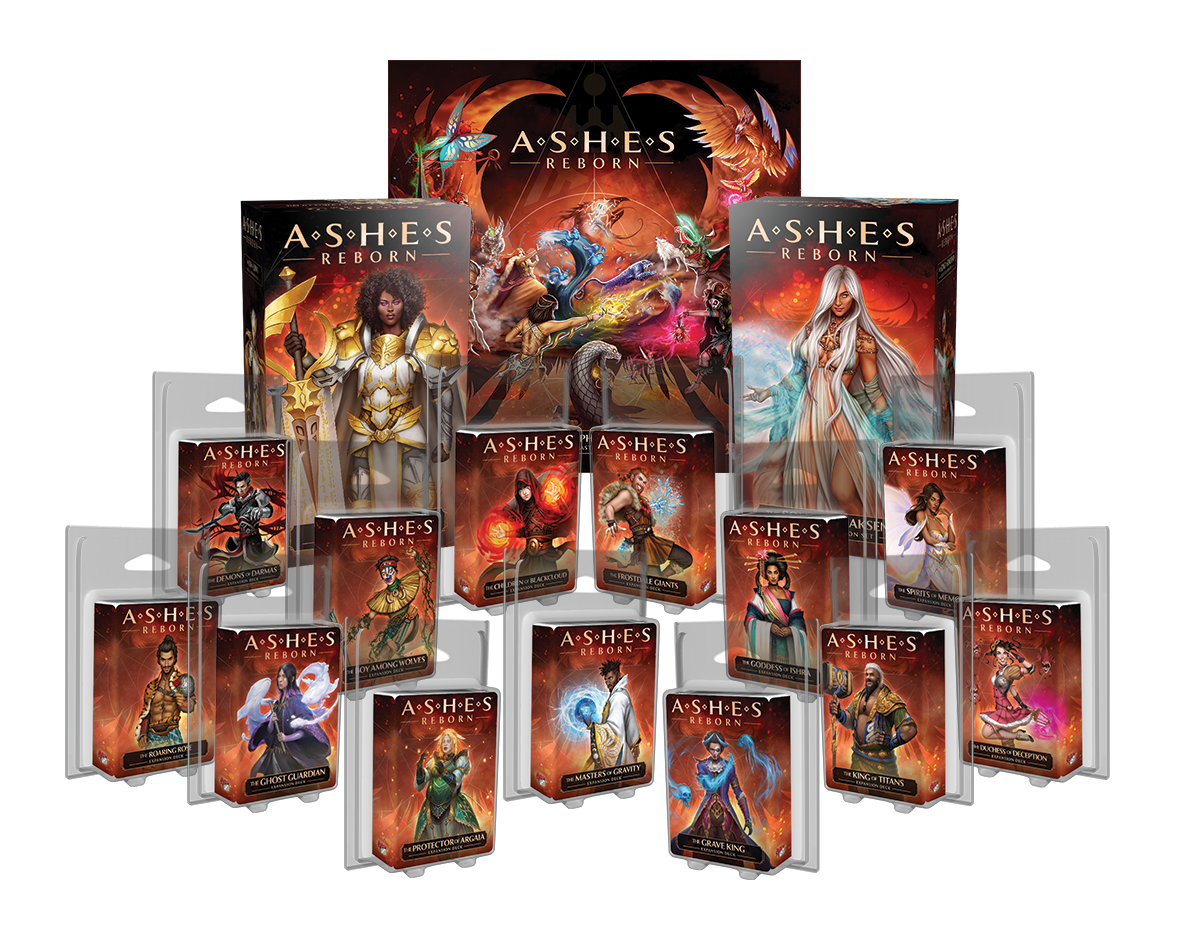 I’d like to wrap up here by saying that Ashes Reborn has already come a long way toward supporting positive gameplay experiences with these adjustments. There are still more philosophies that are being stress tested by our team of playtesters to further these successes. Stay tuned for more updates on the development of Ashes Reborn! If you are interested in signing up to be an Ashes Reborn playtester, you may submit an application at https://playtest.plaidhatgames.com/ashes-signup/. You may be contacted to join the playtest team, depending on the needs of development.