Questions about the app? We've got the answers!

As we’ve been talking to people about Forgotten Waters, we’ve had a lot of questions about the app. My name is Joe Ellis - I’m a co-designer of Forgotten Waters along with Isaac Vega and Mr. Bistro, and I’ve been working for Plaid Hat Games since 2012, full-time since 2015. I built the app, so I’m here to provide answers.

IS THE APP REQUIRED?

Yes. However, we are working on a plan to make printable PDFs and/or on-demand printing for people who really want a 100% analog experience. There are some disadvantages to this that would keep me from personally ever playing this way, but we want to give people the choice. We’ll update you on plaidhatgames.com when one or more of these options are available.

DO I NEED INTERNET FOR THE APP?

No. Once you’ve accessed the app and used it once, it has cached on your browser and will work offline. Most browsers also have features to add the app to your device home screen. Then you can access it without internet, in airplane mode, etc. The only feature that will require internet access are the voiceovers and ambient sounds.

IS IT ON AN APP STORE?

It is not. You have to go to https://www.fwcrossroads.com (published app coming soon!) to access it. Because it is served from the web, it completely bypasses the Google Play store and the iTunes store. Therefore you can’t be surprised by OS updates that mess with the app’s functionality. It also means we aren’t bothering you with push notifications or pestering you to rate us on an app store.

COULD THERE BE AN IOS/ANDROID APP EVENTUALLY?

Thanks to React Native and Expo, I have had a version of the app running on iOS and Android devices. If interest in a native app continues after the game’s release, we could consider polishing those versions of the app and publishing them. To be honest though, once people have the web app running and installed on their devices, they don’t tend to care.

IS THIS THING GOING TO BREAK IN SIX MONTHS?

No way! The app is built on well-supported, mature but modern, JS tech. It is served from a media bucket - it does not depend on any backend server code or backend database to run. It does not to depend on the approval of Apple/Google to be available.

BUT WHAT IF YOU DO STOP SUPPORTING IT?

If we ever stop supporting Forgotten Waters, we commit to releasing the code as open source, and at that point you could run it on your own computer with a couple simple yarn commands (or more likely, Colby, myself, or a fan would put it up on a personally owned server for everyone).

CAN I WRITE MY OWN SCENARIOS?

If the game has a big fan response, I would love to modify the tool we used to write the JSON files that feed the app. This is a “wait and see” feature, though.

One reason the app is relatively simple is that we developed the game for 2 years expecting it to be 100% analog. The box would have included a sand timer, plus a bunch of event books. This presented a couple problems.

First, the price was coming out higher than we wanted it. Second, the event books were getting longer and longer as we filled out the content and saw just how huge each scenario would end up being. This hurt the cost more, AND it got more and more fiddly to flip through such long booklets.

After a lot of exhausting discussion, we settled on an app that replaces JUST the sand timer and event books. The app does not track when you begin or complete a scenario or save your game. This way, there is a lot less total potential for errors and confusion. Instead, the entire “game” part is in the physical components. I personally haven’t been a fan of games that takeover the experience and leave me feeling as if they could’ve been programmed without the physical game. Forgotten Waters hits the sweet spot of app utility in my opinion.

WHAT ALL DOES THE APP DO?

Besides cutting down on fiddliness, the app provides some functions that wouldn’t be possible on paper. The obvious one is the full voice-acted audio drama that is being recorded, along with ambient sounds based on what location book page you’ve most recently turned to.

The less obvious, but just as important, feature the app provides is that we can (and usually do) write multiple entries for each event, especially for events that trigger from the location book. If the event can trigger in multiple scenarios, we wrote even more for it. The app keeps a log of what entries you’ve accessed, and whenever it can, it throws something new at you rather than repeating itself. The app gives us the ability to write more and you the ability to access more of what we write.

WHAT ARE THE TECHNICAL DETAILS OF THE APP?

For those interested, here are the technical details of the app.

Have more questions? Feel free to contact us at: [email protected] 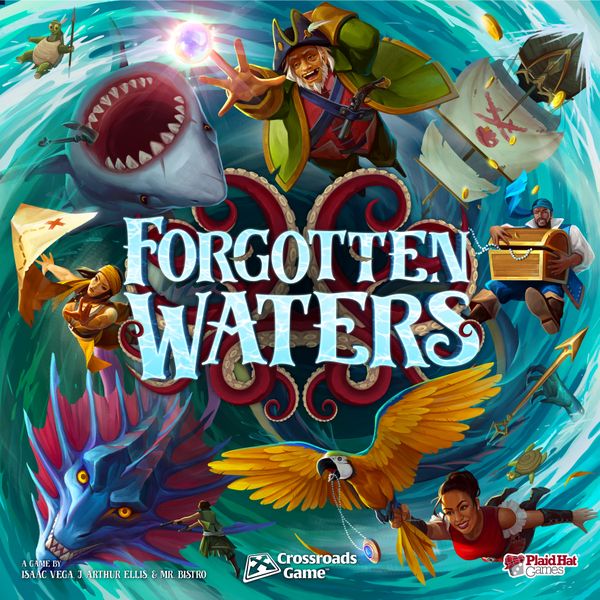 Forgotten Waters
$59.95
3-7
14+
2-4 hours
Forgotten Waters plunges players into the lives of pirates aboard the finest ship ever to sail the seas. Play through exciting app-assisted scenarios, and laugh as you and your friends decide if you want to save the world, or bonk it on the head and steal its money.