Hello, and welcome to the first in a series of articles previewing our upcoming cooperative robot programming game Quirky Circuits: Penny and Gizmo’s Snow Day. In this article we are going to show what comes in the box, and how the gameplay works. 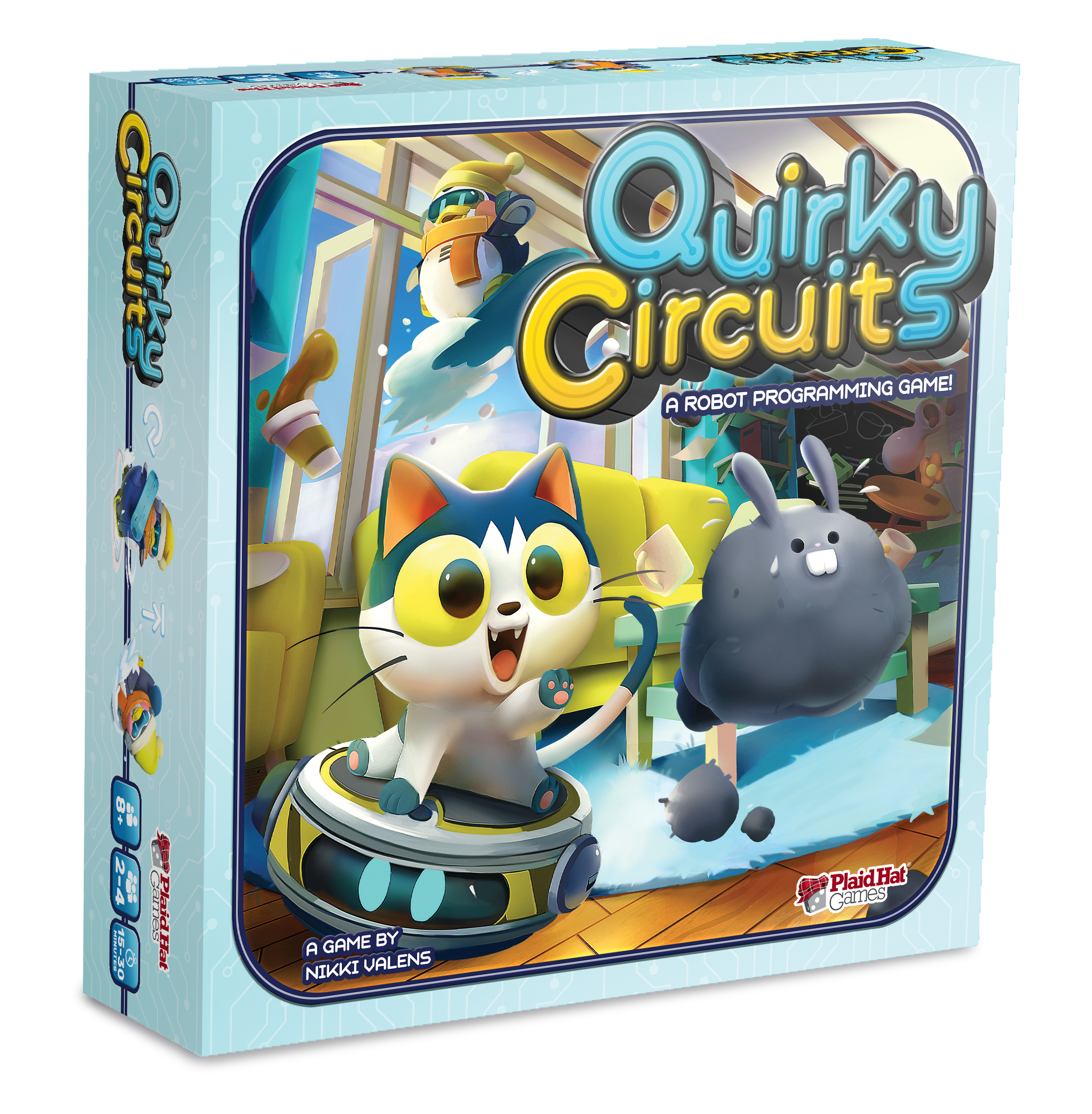 Winter has arrived in Robotopia and snow is everywhere. Outside, Penny is racing through the snow collecting flags. Inside the cozy house, Gizmo is busy chasing the restless dust bunnies. It’s your job to make sure they’re programmed to complete their tasks before they run out of battery. Let’s take a closer look.

Quirky Circuits: Penny and Gizmo’s Snow Day comes with a rulebook and a 20 Page Scenario Book that has 10 scenarios. Two adorable robot figures depicting Gizmo the programmable vacuum and Penny the Penguin robot is a snowboarder. Each robot has a reference card and their very own deck of command cards you will use to control them. There’s a battery token to track your robot’s battery juice, and 16 tokens.

Quirky Circuits is a cooperative game for 2-4 players ages 8 and up. In a cooperative game, players are not competing with each other. Instead, you work together to try and complete each scenario before your robot’s battery runs out. The scenarios start out easier and gradually increase in difficulty. If you succeed at a scenario, the amount of battery remaining will determine just how well you performed. If the battery runs out, you fail the scenario. Play each scenario multiple times to see how well you can do and hone your skills as a team!

Place scenario tokens on the scenario map on the spaces with a matching symbol. Place the robot on the start space.

Place the battery token on the highest spot on the battery track at the right side of the map. Now deal each player a number of cards based on the number of players, 5 for two players and 4 for three and four players. Players can look at their own cards but cannot reveal their cards or talk to each other about their cards, strategy or intent.

Each robot has its own unique deck of command cards. Each command card in the deck programs a certain move for the robot. Some cards turn the robot, others move the robot forward or backward a number of spaces depicted. The robot’s reference card shows the number of each command that is in their deck.

This is handy because the game is played with hidden programming, and understanding the probability of certain cards can help you determine what your fellow players might be able to play. 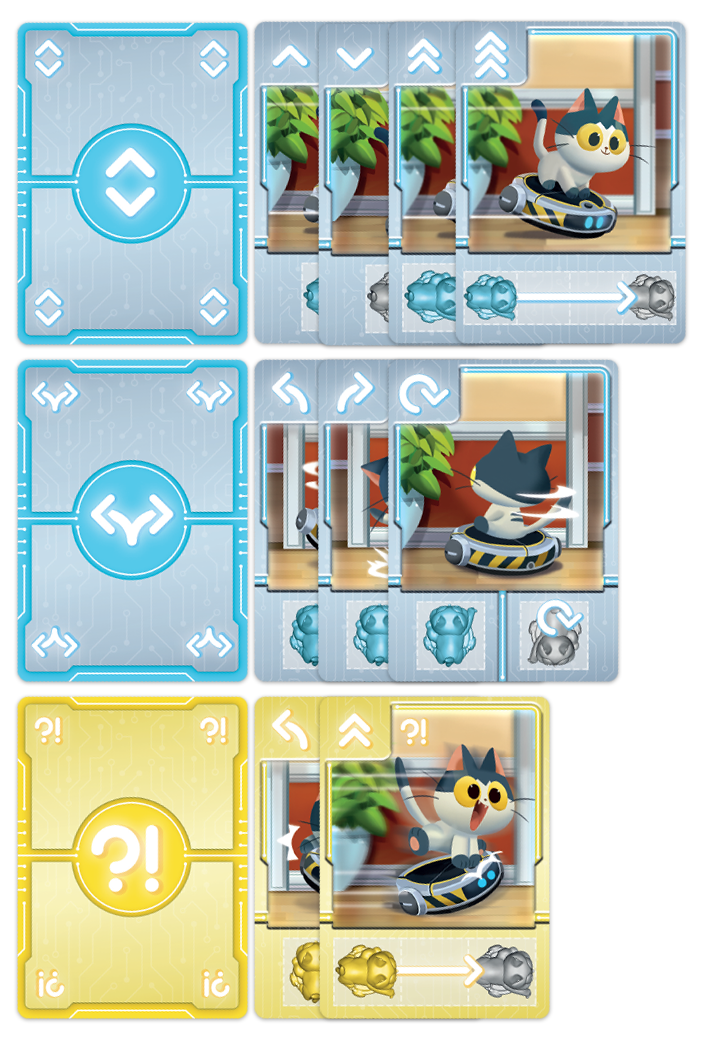 The goal of each scenario is to collect the scenario tokens by guiding your robot around the map using commands. When your robot moves into a space with a scenario token, remove that token from the map. When all tokens have been removed, guide the robot back to its start space. Each round, the battery will move down the battery track. Try to accomplish the goal before the battery runs out!

Now that the cards are dealt, the round begins. There is no turn order. Players can play cards when they feel it will help the robot to get to where it needs to go. To play a card, place it face down near the board. Each card after the first, must be placed to the right of the previous card to form a queue. Since players cannot communicate, they must intuit what the other players have played, and play their own cards appropriately. Each player must play at least 1 card, but may play more, even playing their whole hand if they choose. 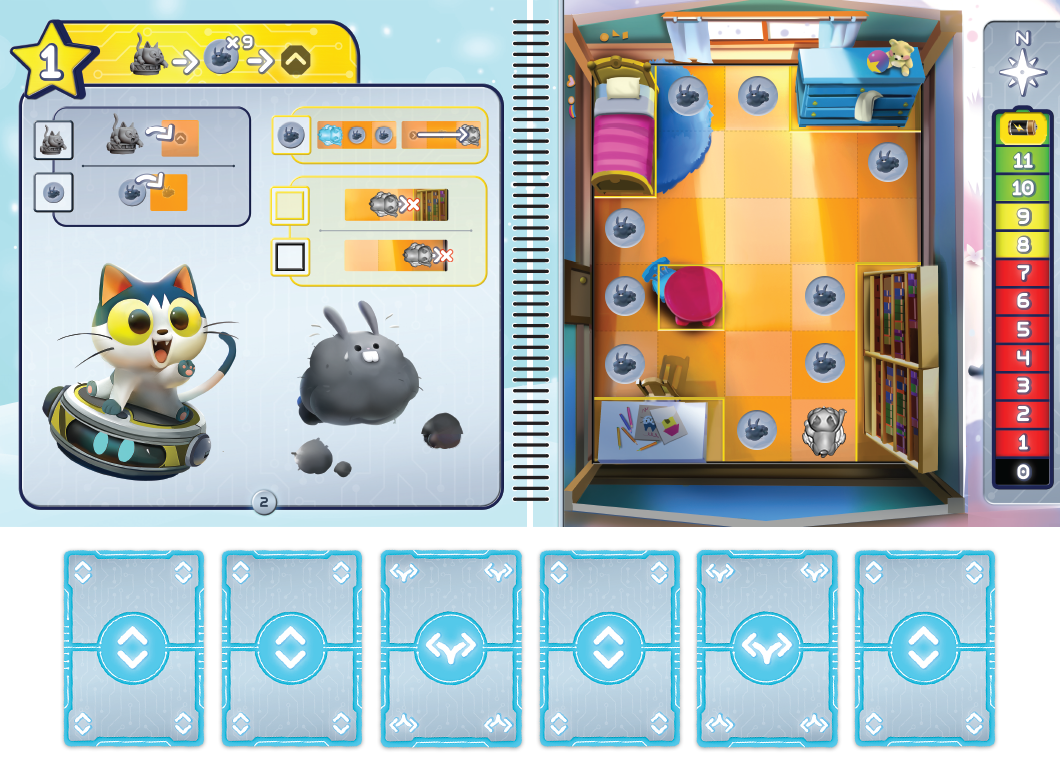 You’ll be pleasantly surprised how intuitive group think works, even when traditional communication is limited. Each command card has a symbol on the back indicating whether it is a turn of some kind, or if it is a movement of some kind. Studying the map and pondering the kinds of commands you think your teammates would play in the interest of completing the scenario informs how you play your cards. 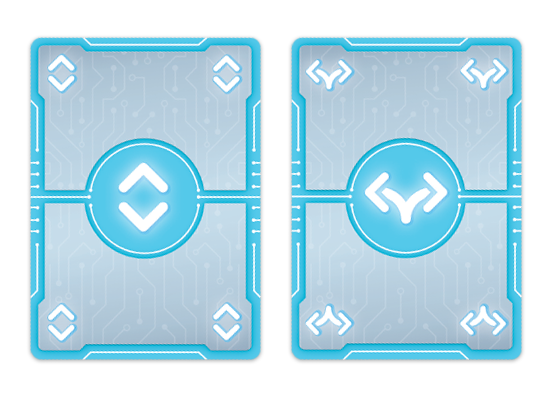 The players can stop playing cards any time after a total of 5 or more have been played. If a player has already played at least 1 card and they decide they have played all the cards they want to play, they can place their hands face down on the table to indicate they are done, or use the code Beep-Boop, which is the only verbal game signal you can use during the round. Any cards a player does not play, will stay in their hand for the next round. 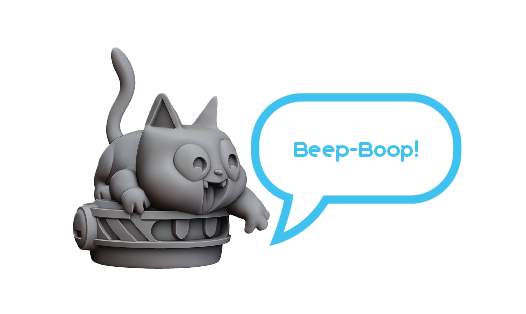 Once all players are done playing command cards, it’s time to see how your commands controlled the robot’s moves. Starting from the left, you will reveal each card and move or turn the robot according to the command on the card, discarding any scenario tokens it moves across as it goes. If a command causes the robot to halt for any reason such as colliding with a wall or obstacle, you move on to the next card.

Keep playing until you either run out of batteries, or you complete the scenario goal.

That’s a basic overview of how the game is played, but there is more. As you work your way through the book, the challenge will steadily increase and new rules will be introduced. Let’s take a look at a couple of things that add a twist to the game:

Each robot has a special function that affects how they interact with certain features on the map. Gizmo turns left after halted by an obstacle such as a wall or chair. Penny, of course, slides when she goes down a snowy slope. Keeping these special functions in mind, and using them to good effect is part of the strategy. It can also be a source of disruption if you don’t plan well.

Later scenarios introduce Quirks. These are glitches in the programming that challenge the players to adapt. Each robot has a set of 3 yellow Quirk command cards. When a scenario instructs, shuffle the Quirk cards into the command deck. When a player has a Quirk in their hand, they must play it first before they can play any other card in their hand. Since the Quirks are limited, if you pay attention to their use, you can often predict which Quirks have been played, and adjust your strategy to account for it. 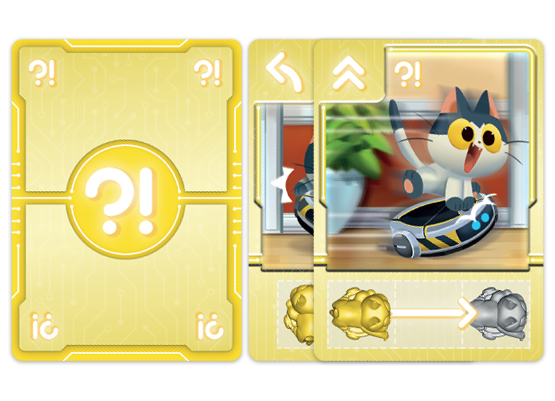 Gizmo scenarios take place indoors and feature obstacles in the form of furniture. Sometimes pesky dust bunnies are on the furniture and you will need to intentionally bump into the furniture to knock them off so you can clean them up. Sometimes furniture will have breakable objects on them, and a careless bump just might add more things to clean up.

Penny scenarios are outdoors in a winter wonderland. They feature slopes that you can slide down but not up, snow drifts that hinder your movement, and icy tunnels Penny can slide through zooming out the other side.

That’s all for today! Make sure to check out our preview next week where we talk about Gizmo the robot vacuum. See you on the slopes! Brrrrr! 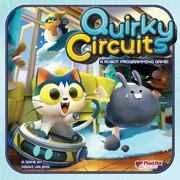