Welcome back summoners! The Fallen Kingdom will stop at nothing to achieve victory, and today we’ll show off how they can exchange their own life for power. 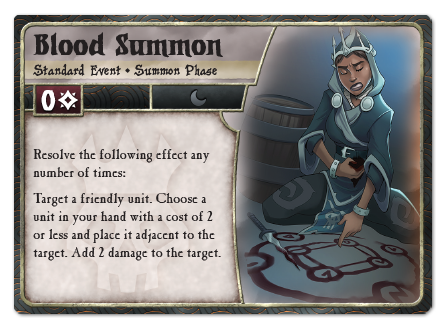 Blood Summon is a key event card for summoners on a magic budget. This effect effectively allows you to convert your units’ life value into magic for units that cost 2 or less. In addition, this event lets you summon units in positions other than just from your gates for some surprising aggressive presence! 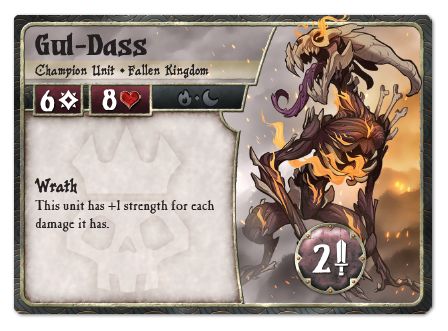 Gul-Dass is a Fallen Kingdown champion particularly interested in receiving damage for benefits, as each point of damage on it gives it extra strength! With 8 life to spare, it can be tempting to use Blood Summon on Gul-Dass for even more sudden burst damage! Even without self-damaging effects, Gul-Dass is a threat that demands a clean answer, or else it’ll come back with an even deadlier revenge swing. Look out!

Tomorrow, we continue our daily Summoner Wars previews as we explore more ways for the Fallen Kingdom to reap rewards from their fallen friends and foes!