Welcome back summoners! The Savanna Elves have only been growing in power since our last preview, building up to the biggest champions they have! Check them out! 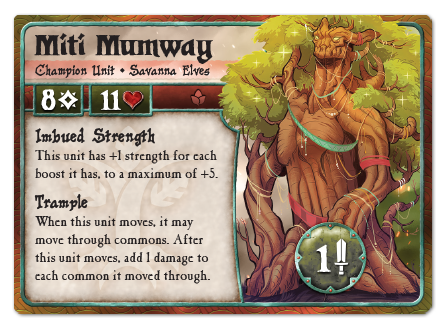 Miti Mumway is a massive investment at 8 cost, but brings with them a force that can break an entire army! Miti Mumway comes built in with a Chant of Power effect, gaining strength equal to its boost for as long as its 11 life will last. Trample will help ensure you can break through enemy lines, smashing any commons that stand in the path to their summoner! There’s no way around it; when Miti Mumway enters the fray, carnage ensues. 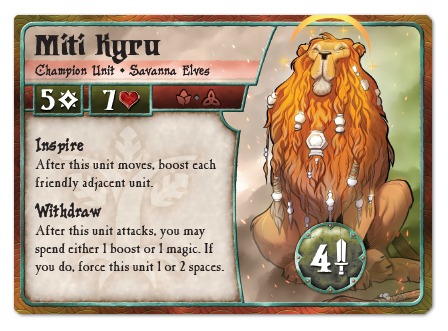 Miti Kyru is another all-star champion of the Savanna Elves, playing a key role in boosting her allies after moving with her Inspire ability. We’ve seen no shortage of stat gains that the Savanna Elves can get from boost tokens, so it should be no surprise that this effect can carry your army to victory! Miti Kyru is equally adept as a support champion and a fighter herself. 4 melee attack will always hit hard, and her ability to Withdraw from battle can keep you ahead on proper positioning.

Tomorrow, we continue our daily Summoner Wars previews as we explore another pairing of common unit and complimentary Chant event! See you there!