Every Rose has its Thorns

Welcome back, Ashes players, to another installment of Re-Constructed. Be wary, you may be in the presence of greatness.

By this point, you should already know the deck building restrictions we’re working with. If you do need a refresher, you should check out our many previous articles in the Re-Constructed series. Last time we talked a little bit about the exhaustion win condition, in which the goal is to famine your opponent out of cards for a victory, and showcased Saria, arguably one of the best Phoenixborn in the game for executing that gameplan. But, there is another, and his following might be even more dedicated… 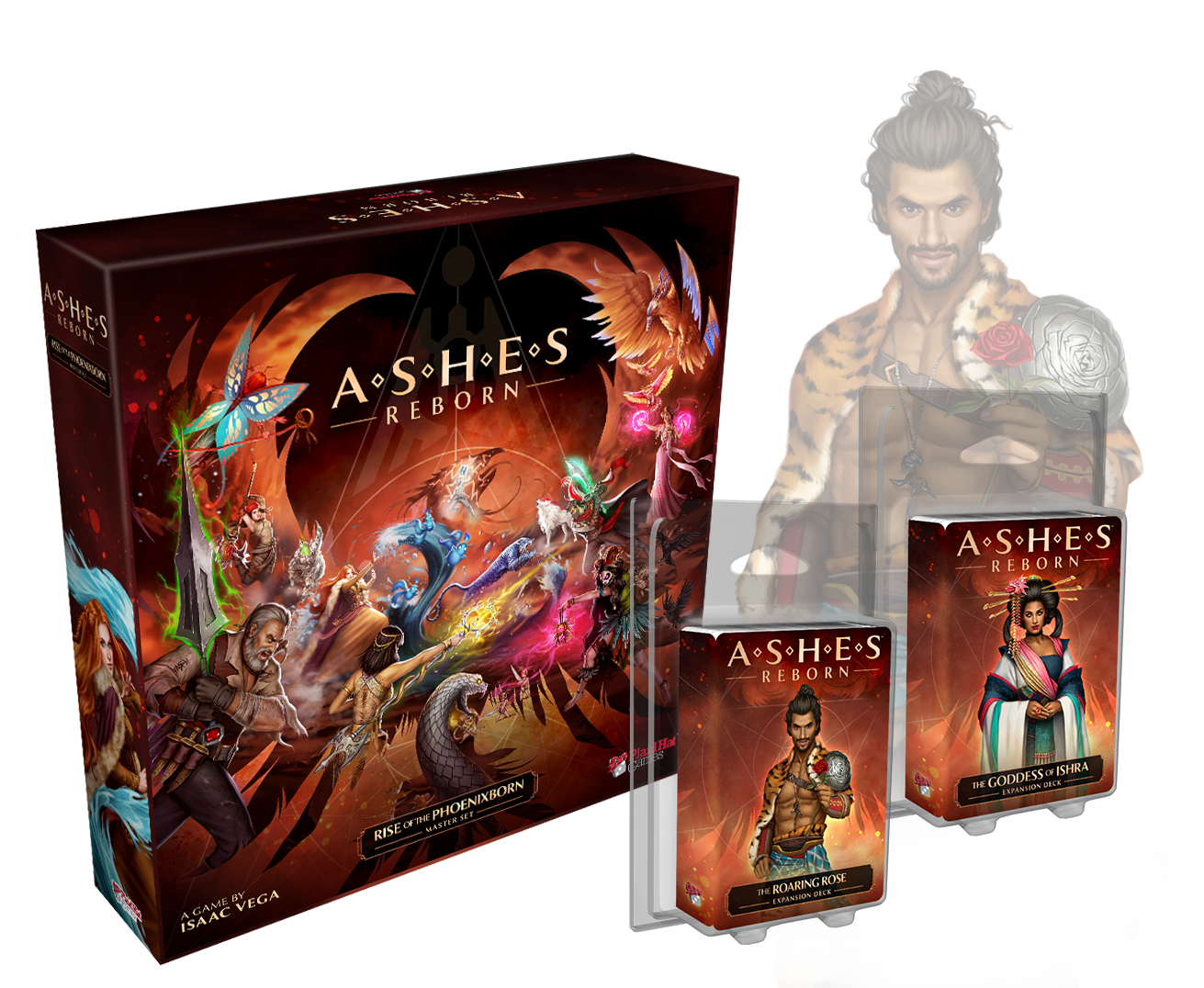 10 Charm // Needed Sets: The Goddess of Ishra, The Roaring Rose

Back in the mono-illusion article, we also mentioned charm magic as being a dice type that only really blooms when paired with other magics, and I think that statement might actually hold more true for charm since it tends to lack a game plan outside of hard exhaustion. You can definitely feel that in Leo’s precon: Orchid Doves and Glow Finches have the lowest possible statline in the game (0/1/0 = just enough to breathe and die), but also present death triggers designed to wear your opponent’s deck down. Nightshade Swallow is similarly geared for defense, as is the deck’s only ally Beast Tamer. Cards like Anguish, Mind Probe and the often underappreciated Memory Theft make for great options in a neutral game state, Change Psyche helps keep our opponents locked down, and Remorse is a powerful reactive measure for when people finally get tired of not attacking us. You’ll certainly find a wealth of powerful tools during neutral and defensive positions in this precon, but there are basically no “active” components outside of Amplify. In other words, we’re left at the mercy of our opponent to play into us, and while Memory Theft can technically just win the game on its own, I think we can and should do better. 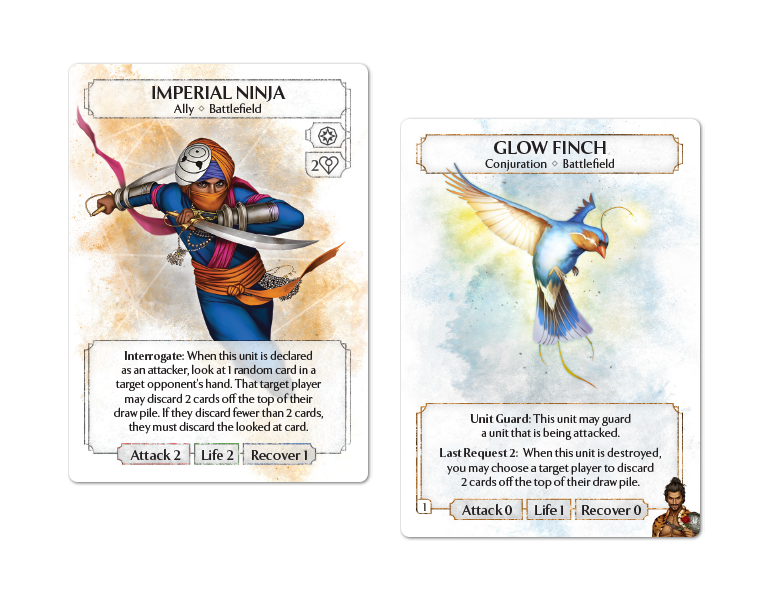 The goal this time around is to maintain a fair amount of our neutral and defensive options while adding some proactivity, and I can’t think of a better addition for this mono-charm stem than Imperial Ninja. With the ninja in tow, we can actually apply pressure on our opponent’s exhausted/weaker units while still advancing our exhaustion victory. Additionally, Imperial Ninja is often a threat that your opponent will feel the need to address, likely forcing attacks for Remorse and giving our Glow Finch a much more meaningful outlet for unit guard. Now, that doesn’t mean that we have to attack with ninja all the time as soon as possible, but we do need to at least present the threat of danger to force our opponent’s hand. You’ll also notice that a couple cards are absent this time: Mind Probe and Dispel. Dispel is a pretty straightforward omission (there aren’t any cards with status or alterations that we really have a need to address here), but the main reason we’ve cut Mind Probe is actually because it’s redundant. We’re already planning to activate Memory Theft just about every round, so playing Mind Probe in addition is a bit overkill for gathering information. 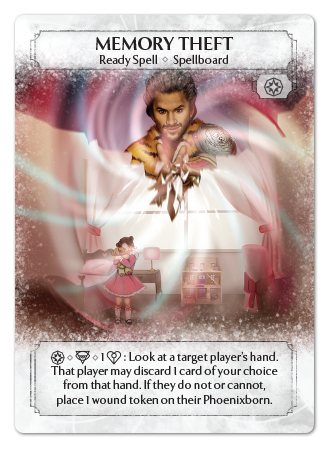 Speaking of which, let’s talk a little about Memory Theft. This spell’s actual function as an exhaustion tool is a little weak compared to Purge or Abundance, but the real value is revealing your opponent’s hand. A little knowledge can go a long way in Ashes; being able to plan out the entire round and navigate around all the pittraps your opponent might be holding is invaluable. For the sake of really highlighting this strength, we’ve added a few extra reactions that cover a wide range of conditions, as cards like Redirect and Golden Veil are at their best when we know exactly when we need to use them. (As an aside, Redirect is also amazing with all of the death triggers on our battlefield.) At best, we’re able to optimize all of our rounds, and at the very least we might force our opponent to misplay out of paranoia.

Bird is definitely the word. Our first round is packing doves, swallows, and finches, along with Memory Theft to set up for future rounds. We don’t want to cast Open Memories until we’ve seen most of the opponent’s hand (either they played most of their cards, or we used Memory Theft). This is because we need to make sure we’re focusing the correct spellboard card for the current matchup. For the 5th pick, I usually go with Imperial Ninja and wait for the opponent to create an opening before playing it (another place where Memory Theft can help us out). Against a crazy aggressive deck or an opponent with terrifying/gigantic units, there’s a call to start with Beast Tamer instead of Imperial Ninja, but regardless of what your opponent is playing we have access to Open Memories so we should be able to adjust on the fly. There’s also a fair argument to run Anguish in your opening hand since your opponent will definitely not throw away any cards or dice on their first round (2 dice for 4 damage is pretty spicy), but early on I’d rather have stability than heavy disruption tools like Anguish that I think will be more important later. 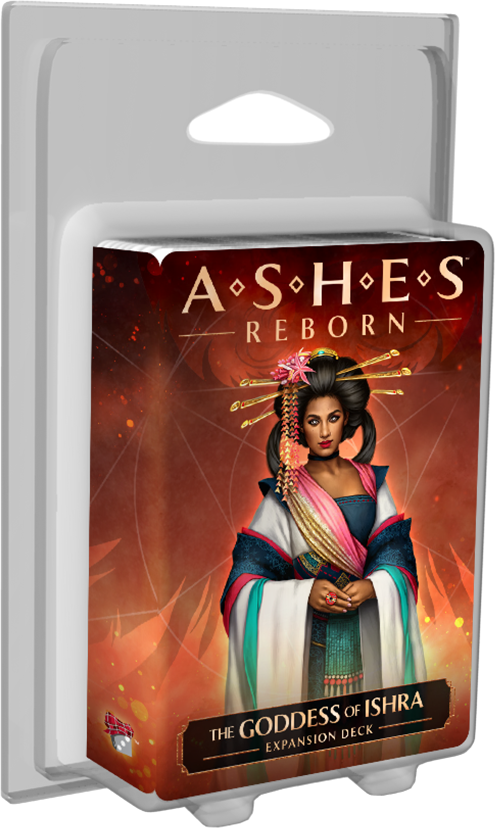 Truth be told, the first draft of this deck also featured The Protector of Argaia, but I found that Enchanted Violinist worked a little better here than Return to Soil and I couldn’t completely justify Seeds of Aggression. However, I do feel that Imperial Ninja is a real game changer for this kind of deck, as it’s one of the only methods we have for consistently interacting with our opponent’s battlefield (mono-charm is definitely lacking in this department). It’s also a crucial tool when facing other exhaustion decks since Imperial Ninja can often attack their 0 Attack units without fear of repercussion, leading to lots of potentially free value. Goddess of Ishra also offers some unique tools like Call to Action, Royal Charm, and even Summon Weeping Spirit if you’re looking to experiment more. And speaking of experimentation...

Within the mono-charm thread, there are a few optimizations you can make. Three-Eyed Owl is probably stronger on average than Orchid Dove, and Seeds of Aggression can be used to help clear your battlefield if it starts getting too cluttered (while also enabling your death triggers). I don’t like Refresh in this deck, but I can see a world in which Transfer might be a better pick than Change Psyche. The reaction numbers could also probably use some tweaking; I personally value 3 Redirects since they are so effective with doves and swallows, but Golden Veil can come out for Sympathy Pain or possibly even Call to Action. 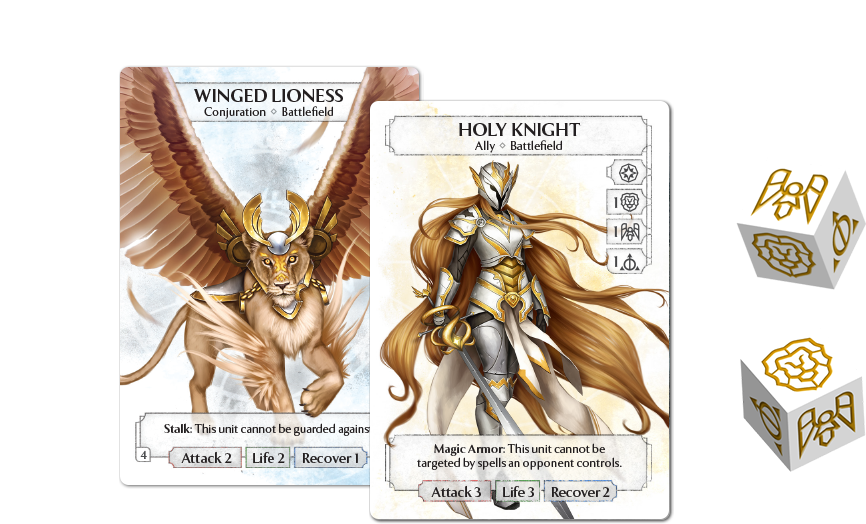 However, if you really want to open this deck up, you’ll need to blossom outward. Mono-charm just doesn’t have enough teeth, but you can sharpen your thorns with almost any other dice type. One avenue is ceremonial magic, which gives you access to a wide variety of sacrifice effects that pair well with doves and swallows (as we saw in the Jessa re-con). Leo also does quite well with divine magic, potentially opening a space for stronger units like Winged Lioness and Holy Knight that pair excellently with Glow Finch’s protection.

That’s all we’ve got for this article. Come back next time for some re-mixing fun with Namine!

Pre-Order the Master Set
Ashes Reborn: Rise of the Phoenixborn PRE-ORDER
$49.95
2
14+
30-60 minutes
THIS IS A PRE-ORDER! Choose from six Phoenixborn in this Ashes Reborn base set, using imaginative cards and custom dice to summon faithful allies, combine powerful spells, and outwit your opponents in a fast-paced back and forth barrage of well-crafted magic and strategic skill.