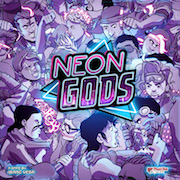 Featured Product
Neon Gods
$59.95
2-4
14+
60-120 minutes
Neon Gods is a story of street gangs claiming territories to sell their merchandise in while avoiding the cops in a kaleidoscopic near future of heightened reality.

You’re a little fish in a day-glo sea, but it doesn’t have to stay that way. The world’s gone corporate and sanitized, but that just means there’s more demand for that black mark merch humanity craves. So pull your gang together and carve some territory out of the neon-soaked nighttime of downtown.

When the uptownies come looking for sin, you’ll get ‘em what they need. Neon Gods - How to Play